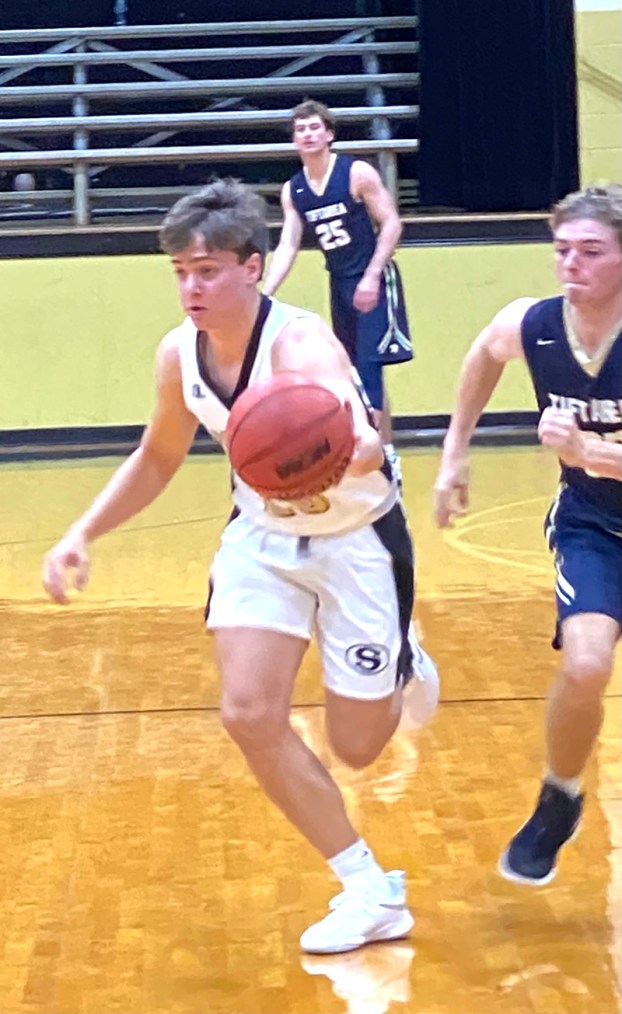 Raiders use dribble penetration in lopsided victory over Tiftarea Academy

AMERICUS – After a slow start in the first quarter, the Southland Academy Raiders (SAR) decided to implement a strategy of taking the ball to the basket to score points instead of settling for jump shots and three-pointers. While those outside shots were attempted and made from time to time, SAR’s strong commitment to scoring through dribble penetration, which began in the second quarter, was a key catalyst that would eventually lead the Raiders to a 76-44 victory over Tiftarea Academy (TA) on Tuesday, January 19, at the Melvin Kinslow Gymnasium.

SAR senior guard Owen Exley was on fire for the Raiders. He led all scorers with 28 points, including five three-pointers. Senior shooting guard Max Foster also had a monstrous game for SAR, scoring 25 points in the contest. Senior point guard Nathan Duke was also in double figures with 10 points.

With the win, the Raiders improve their overall record to 8-3 and they are now 2-0 in the Region 3-AAA standings. 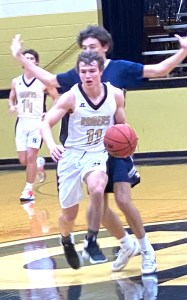 The Panthers jumped out to a 7-2 lead to start the game. That run was capped off by a three-pointer from John Austin Lee. TA would later take a 9-2 lead on a defensive breakdown by the Raiders, prompting Foster to call a timeout to get his team to regroup. That timeout seemed to help, as the Raiders scored seven unanswered points to tie the game at 9-9.

SAR then went on a 12-5 run to take a 21-14 lead early in the second quarter. Exley continued to help his team keep a large lead by drilling a three-pointer and scoring a basket through dribble penetration to give the Raiders a 26-17 lead with a little more than five minutes left in the first half. During this period of the game, the Raiders also intensified their defensive effort and limited the Panthers’ scoring opportunities.

Southland Academy junior small forward Buddy Brady goes up for a rebound against Taiftarea Academy. Brady scored five points in the win over the Panthers.
Photo by Ken Gustafson

During the last three minutes of the first half, the Raiders continued to be aggressive offensively by driving to the basket and scoring, as well as getting to the foul line and knocking down free throws.

Then with 1:35 left before halftime, Exley struck again with another three-pointer to give SAR a 32-21 lead. During the final minute of play before halftime, the Raiders tried to run some clock to get the last shot, but were unable to score. Nevertheless, SAR completed a solid second quarter of basketball and went into the locker room leading 33-21.

Exley scored 14 of his game-high 28 points in the first half, including three shots from beyond the arc.

In the third quarter, the Raiders took total control of the game. They did this by using their defense to limit the scoring opportunities of the Panthers and by being aggressive offensively. SAR focused on attacking TA’s interior defense by driving to the basket. The Raiders were able to score numerous points this way and were able to knock down foul shots. In addition to their solid half-court defense and their aggressiveness on offense in getting to the rim, the Raiders forced turnovers on defense and outrebounded the Panthers in the paint. As a result, by the 5:00 mark of the fourth quarter, SAR had a 62-38 lead. 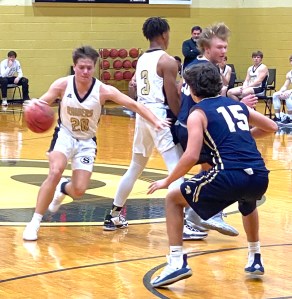 Owen Exley (#20) uses a ball screen from teammate Carmelo Volley (#3) to drive to the basket.
Photo by Ken Gustafson

Even with the big lead, the Raiders never let up over the final five minutes. They continued to force the Panthers into committing turnovers and went on a 14-6 run to close out the game.

With the loss, the Panthers fall to 5-4 on the season. Dylan Harbort led them in scoring with 15 points.

Up next for the Raiders is another region game at home against Brookwood on Friday, January 22. Tip off is scheduled for 8 p.m.

From Staff Reports   AMERICUS – The South Georgia Technical College (SGTC) Jets and Lady Jets will kick off the... read more