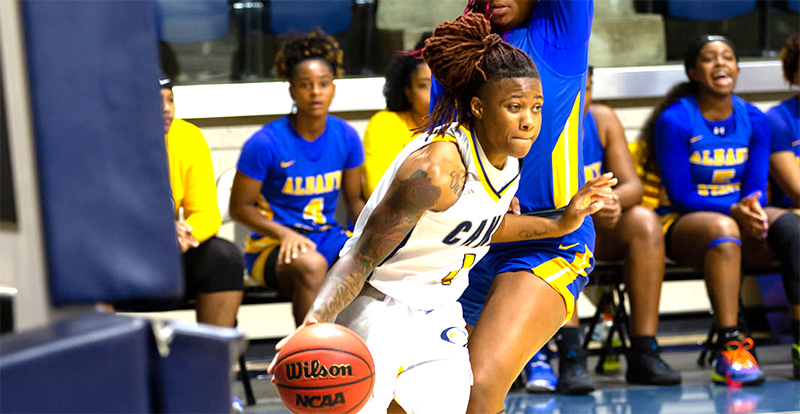 MORROW, GA – Georgia Southwestern State University (GSW) junior guard Lex Chatman scored a career-high 27 points against Clayton State University (CSU) on Wednesday, January 20, in the Loch on the CSU campus. However, in spite of Chatman’s effort and performance, the Lady Hurricanes fell to the Lakers by the score of 84-65.

Chatman scored the first 10 points of the game and ended the fist half with 20 points, while going 10-of-19 from the field. CSU led with 50 bench points for the win.

GSW (4-3, 2-2 PBC) started the game with five turnovers, which allowed the Lakers to take a 10-0 lead. With 6:58 left in the opening quarter, Chatman was finally able to get GSW on the board. Chatman then scored back-to-back three-pointers, followed by a quick jump shot to score all of the Lady Hurricanes’ 10 points. As a result, GSW only trailed 15-10 with 4:30 remaining. As both teams exchanged scores, a three-pointer by GSW guard Jaleah Storr closed the game to 22-19 going into the second quarter.

A’Aliyah Clay opened up the second quarter with a quick layup, as the Lady Hurricanes were only down 22-21. However, the Lakers quickly responded with a 7-0 run before Chatman hit another three-pointer to end that run. Midway through the second quarter, the Lakers (4-1, 4-1 PBC) took a 33-23 lead, but the Lady Hurricanes continued to fight back. The Lakers were able to take a 12-point lead at one point, but GSW closed the gap to 39-30 going into halftime.

The Lady Hurricanes fought back by going on an 11-3 run and trimmed the score down to 68-48 early in the fourth quarter. However, GSW wasn’t able to cut the deficit any further and the Lakers went on to win 84-65.

CSU controlled the entire game and never trailed. The Lakers outscored GSW’s bench 50-22, while also controlling the 36-27 rebound battle. The Lady Hurricanes struggled with taking care of the basketball. They committed a total of 22 turnovers on the night, while the Lakers committed 17. GSW went 20-of-50 from the field for 40 percent, while CSU shot 30-of-65 from the field for 65.2 percent.

Storr came off the bench with 17 points and three steals, followed by Kayla Grant and Clay, who each finished with six points. Clay also had four rebounds in the game.

Former Americus-Sumter High School standout Timi’a Swanson led the Lakers with 20 points and seven rebounds off the bench, followed by Audrey McElhaney, who finished with 19 points and nine rebounds. Kevanika Brown and Jadah Waithe finished with 12 and 10 points respectively.

Up next for the Lady Hurricanes is a road trip down to St. Augustine, FL on Saturday, January 23, to take on the Lady Saints of Flagler College. Tip off is scheduled for Saturday afternoon at 1:30 p.m.