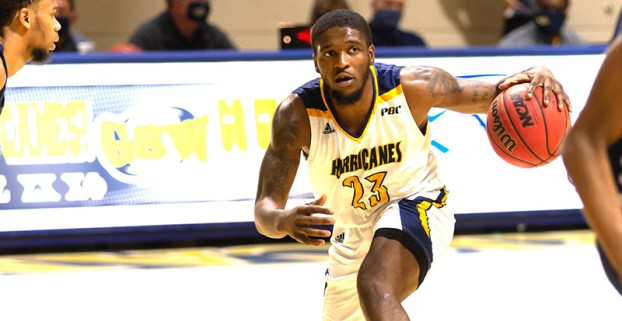 GSW junior guard Donte Tatum scored 18 points on 9 of 11 shooting to lead the Hurricanes to a 73-57 PBC victory over Clayton State. Photo by Christopher Finn

Lakers get lapped by Hurricanes

The Hurricanes led 32-31 at the half, but scored the first eight points of the second period to pull away. GSW stretched its lead to 22 points with less than four minutes remaining.

The Hurricanes dominated the paint, outscoring the Lakers 40-16. They also posted 39 rebounds in this game, which is the most they’ve had in a PBC game this season so far, as they outrebounded the Lakers 39-30. The smothering GSW defense matched its season high with 11 steals and forced 16 turnovers. Both teams made five shots from beyond the arc, but it took GSW 11 fewer attempts to get to that number. Assists were even at 12 a piece. It was the Hurricanes’ first victory in The Loch since Jan. 28, 2015.

GSW junior guard Donte Tatum led the way for GSW with 18 points behind 9 of 11 shooting. Noah Louis picked up his second double-double of the season with an 11-point, 11-rebound effort. Louis made the most of his 21 minutes on the floor, including 4 of 5 shots. C.J. Hood was called on for 25 minutes of action off the bench and delivered with 12 points and four rebounds. Hood, a freshman from Atlanta, has scored in double figures in each of his last three games. Devon Higgs led GSW in the first half with eight points and finished with 11 in the game, along with eight rebounds.