First half explosion from Taylor County too much for Wildcats 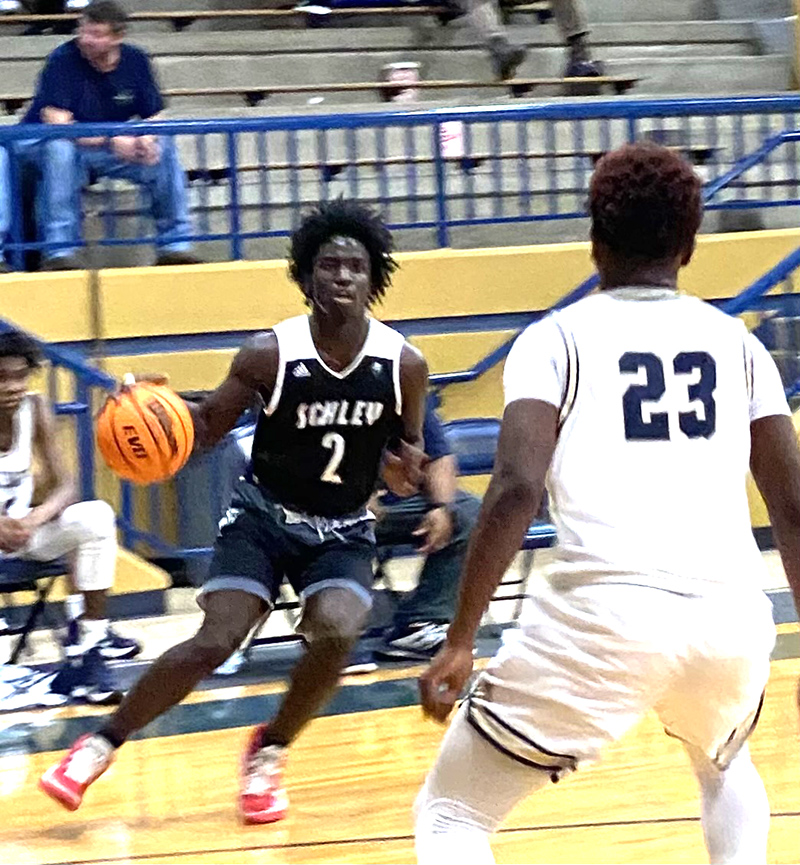 Schley County freshman guard JaLewis Solomon (2) led the Wildcats in scoring with 18 points in their loss at Taylor County. Photo by Ken Gustafson

BUTLER, GA – At one point in the first quarter, the Schley County Wildcats were tied 10-10 with Taylor County (TC), but over the next several minutes, the Vikings outscored SCHS 17-5 and took control of the game from there on out. Though the Wildcats were able to get to within eight points at halftime, that run in the first half by TC proved to be too much for SCHS to overcome. As a result, the Wildcats fell to the Vikings 65-55 on Tuesday, January 26, in the TC gymnasium.

The Wildcats have now lost two straight Region 5 A-Public games, having fallen by one point to Central Talbotton 53-52 last Friday.

One big reason for the Wildcats’ struggles has been the lack of practices and games over the past month due to issues involving COVID-19, which has not only affected them, but some of their region opponents as well.

With the loss, SCHS falls to 1-4 overall on the season and 0-4 in region play.

While they competed as hard as they possibly could, the Wildcats struggled on offense for much of the game, as well as on defense. In particular, SCHS struggled to get defensive rebounds, as the Vikings were able to score numerous times by getting second chance offensive rebounds. 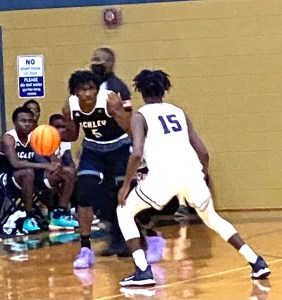 In addition to their inside scoring, the Vikings connected on four three-point shots as a team, with three of them coming from junior guard Nick Woodard.

JaLewis Solomon led the Wildcats in scoring with 18 points and Zamon Ross poured in 11. Trypp Lumpkin chipped in eight points, with six of them coming on two made three-pointers.

With the win, the Vikings improve to 3-5 overall and are still undefeated in Region 5 A-Public play at 3-0. They were led in scoring by Nick Woodard, who led all scorers with 26 points. Jabin Ford was also in double figures with 13 points, including one three-pointer.

The Vikings jumped out to a 6-4 lead to begin the game, but Dylan Taylor nailed a three-pointer to give the Wildcats a one-point lead. Over the next minute or so, each team traded baskets and the score was tied at 10-10. However, at that point, TC began to take control by going on a 17-5 run and took a 27-15 lead. 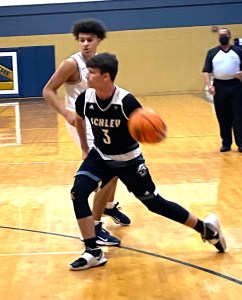 The Vikings were able to do this by getting points in the paint, while the Wildcats were settling for outside shots that, for the most part, weren’t falling.

TC would later increase its lead to 32-15 on a three-pointer by Woodard midway through the second quarter. However, as rough as the first half had been for SCHS, the Wildcats would go on a 13-4 run to close out the half. The final basket of the first half came on a three-pointer by SCHS guard Bryce Blaylock at the buzzer to cut the TC lead to 36-28.

During the first half, the Vikings employed a full-court press, but for the most part, the Wildcats were able to break the press by passing the ball around it. However, SCHS struggled to make shots from the outside, while TC was able to score the majority of its points on the inside. Nevertheless, by the end of the first half, the Wildcats were still in the game, trailing 36-28. 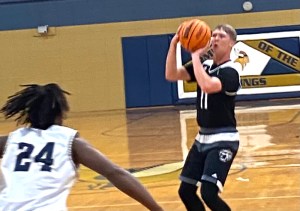 However, the Vikings went on an 11-3 run to begin the second half. They were able to take advantage of SCHS turnovers and scored a few fast break baskets. SCHS also continued to struggle on the inside, as the Vikings were dominating the offensive glass.

The Wildcats tried to get back in the game late in the fourth quarter. They were able to cut their deficit down to 62-52 with back-to-back steals and baskets by JaLewis Solomon. However, it was too little, too late for the Wildcats and the Vikings were able to hold on to secure a 65-55 victory. 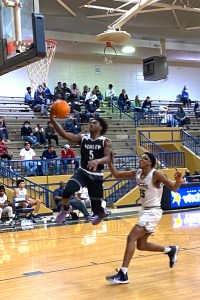 Zamon Ross drives in for a layup.
Photo by Ken Gustafson

The Wildcats were scheduled to host Marion County (MC) in a rivalry game at the GSW Storm Dome on Friday, January 29. However, the Eagles will not be able to field a team due to COVID-19 issues. Fortunately for SCHS, a replacement opponent has been found. After the Lady Wildcats take on MC in the Storm Dome on Friday at 6 p.m., the Wildcats will take on Terrell Academy at 7:30 p.m.