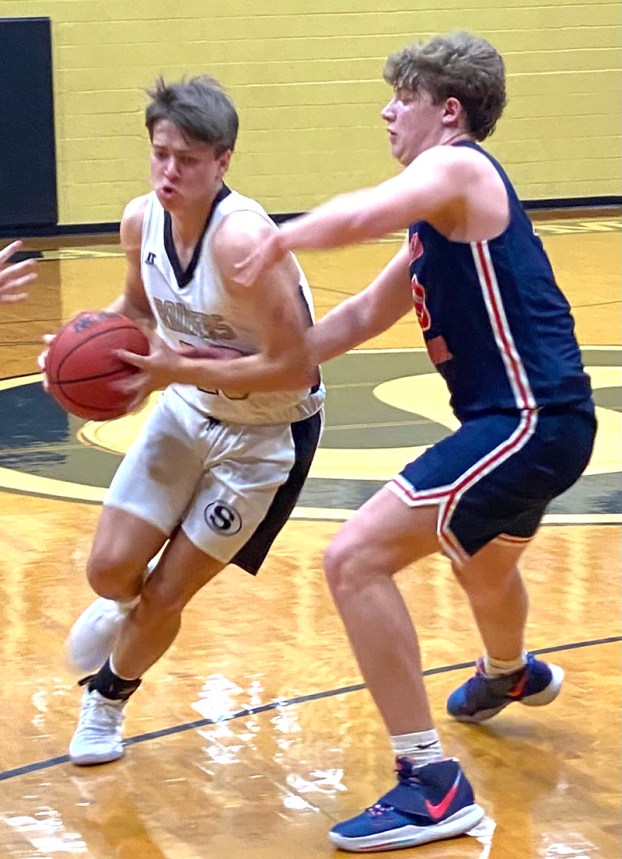 Southland Academy senior guard Owen Exley drives to the basket against Deerfield-Windsor. Exley scored eight points in the win over the Knights. Photo by Ken Gustafson

AMERICUS – The Southland Academy Raiders (SAR) went on a 12-3 run in the latter part of the second half to secure a 50-39 victory over their former Georgia Independent School Association (GISA) region archrivals, the Knights of Deerfield-Windsor (DWS) on Saturday, January 30, at the Melvin Kinslow Gymnasium on the Southland Campus.

With the win, SAR (12-3, 4-0 GISA Region 3-AAA) extends its winning streak to eight games. The Raiders have already clinched the #1 seed in the GISA Region 3-AAA Tournament, which will be played at the GSW Storm Dome in a couple of weeks.

“I thought that in the first half, defensively, we did really well,” said SAR Head Coach Rundy Foster. “In the second half, with their run and jump (full-court press), they (DWS) tried to speed it up and we did not handle it well in the third quarter. I thought that in the fourth quarter, once we broke their first trap, we needed to make better decisions. You either have got to bring it back out and run some offense, or you have to attack the basket if you have the numbers and we did a better job of that in the fourth quarter than we did in the third quarter.”

The Knights, who are now members of the Georgia High School Association (GHSA), fall to 10-9 overall and are currently in third place in the GHSA Region 1 A-Private standings at 5-3. 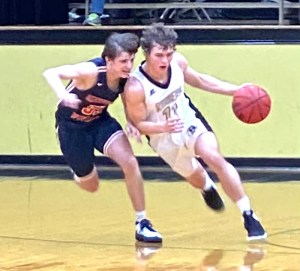 Southland Academy senior shooting guard Max Foster tries to drive past a DWS defender. Foster led the Raiders in scoring with 18 points in the win over the Knights.
Photo by Ken Gustafson

Max Foster led the Raiders in scoring with 18 points and Nathan Duke also hit the double-figure scoring mark with 10 points. Owen Exley poured in eight points and Buddy Brady chipped in five in the winning cause.

The Knights jumped out to a 6-0 lead to start the game, forcing Foster to call an early timeout. That timeout seemed to have awoken the Raiders, as Nathan Duke would hit a three-pointer for SAR’s first points of the game. However, that three-pointer was the beginning of a first half offensive explosion by the Raiders. From that point until midway through the second quarter, SAR would outscore the Knights 17-2 to take a 20-8 lead.

DWS tried to press SAR during the first half, but the Raiders were able to pass through the press and run their half-court offense. Once having broken the Knights’ full-court press, the Raiders were able to run their motion offense and scored several baskets through dribble penetration. SAR’s ability to score on the dribble drive also created opportunities for points outside the perimeter, as Buddy Brady was able to knock down a three-pointer from the corner as the buzzer sounded to end the first quarter. 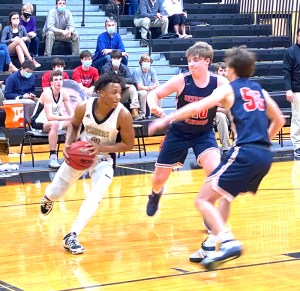 On the defensive end, the Raiders were able to stifle the DWS offense. SAR made it difficult for the Knights to score on the inside and the outside shots were not falling for DWS. All of this resulted in a solid first half for the Raiders and a 24-12 halftime lead for SAR.

However, things began to change in the third quarter. The Raiders were struggling on offense and the Knights were able to make some headway using their full-court press, so much so that they outscored SAR 10-3 and only trailed the Raiders 27-22 at one point. “We didn’t handle their press very well in the third quarter and that’s what got them back in the game,” said Foster.

However, Duke was able to end the SAR scoring drought with a three-pointer with 3:51 to go in the third quarter to put the Raiders up by eight.

Southland Academy sophomore forward Chase Ledger (44) goes up to score on the inside. Ledger scored four points in the Raiders’ win.
Photo by Ken Gustafson

That three-pointer by Duke did more than just give SAR an eight-point lead, however. From that point until midway through the fourth quarter, the Raiders would go on a game-altering 12-3 run, which was capped off by a three-pointer from Max Foster. By that point, the Raiders had a 42-25 lead.

The Knights would go on an 8-3 run to cut the SAR lead to 45-33 with a little more than two minutes left to play, but with 1:24 left, Duke was able to knock down two foul shots to push the SAR lead back up to 14. Duke would later sink two more foul shots to put the Raiders up 49-37 with 41.2 seconds to go. Then with 30 seconds to go, SAR guard Hudson Collins drove to the basket, but was fouled hard. The officials deemed it a flagrant foul, which resulted in a technical against the DWS player. Collins was able to make one of the foul shots to complete the 50-39 victory for SAR. 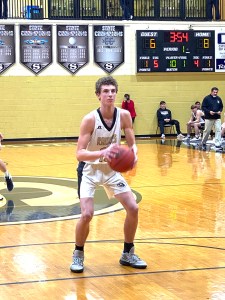 Wright Strickland led the Knights in scoring with nine points and both Will Foy and Andrew Sceals each chipped in eight points in the losing cause.

The Raiders will step back into Region 3-AAA competition when they travel down to Chula, GA to take on the Panthers of Tiftarea Academy on Tuesday, February 2. Tip off is scheduled for 6 p.m.

AMERICUS – The Schley County Wildcats (SCHS) were supposed to face off against region rivals Marion County in the GSW... read more