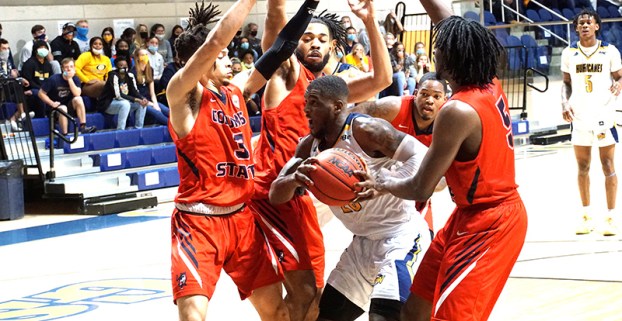 AMERICUS – In a game with 17 lead changes, it was the final basket, a three-pointer by CSU senior guard Kalen Clifton with 5.9 seconds remaining, that proved to be the difference in Georgia Southwestern State University’s 72-70 Peach Belt Conference loss to Columbus State University on Wednesday evening in the Storm Dome.

GSW made two defensive stops on Columbus State’s final possession, but following a missed one-handed runner in the lane and a blocked shot, the Cougars managed to pick up the loose ball off the deflection and heave a deep three-pointer from four feet beyond the line that found the bottom of the net. Following a Hurricane timeout, GSW had good look from the corner that was off the mark, but drew a foul on the put-back attempt with 0.5 seconds left on the clock. GSW missed the first free throw and on the intentional miss on the second attempt, Columbus State came away with the rebound.

Neither side led by more than eight points. Columbus State looked like it might pull away with an 11-0 run late in the second half that pushed the margin to 64-56 with 4:57 to play, but GSW quickly answered with six consecutive points of its own to pull within a bucket and set the stage for the drama in the final two minutes that saw three lead changes. GSW took its final lead of the night with 14 seconds remaining on a follow-up layup by Jarrett Adderton that made the score 70-69.

Donete Tatum posted his third double-double of the season. Tatum drained 10 of 17 shots en route to his game-high 26-point night. He grabbed 13 rebounds, dished out four assists and collected three steals. Devon Higgs added 11 points and three blocks. Baris Ulker knocked down a pair of 3-pointers and finished with 11 points.

With a balanced offensive attack, four of five starters for Columbus State (3-4, 3-4 PBC) scored in double figures, as well as one player off the bench. Kalen Clifton led the Cougars with 19 points. Hunter Preston chipped in 16. Preston and Anthony Moore had nine rebounds apiece to lead CSU.

The next home game for both teams is scheduled for Wednesday, February 10, against Young Harris College. The GSW women are scheduled to tip off at 5:30 p.m., followed by the men at 7:30 p.m.