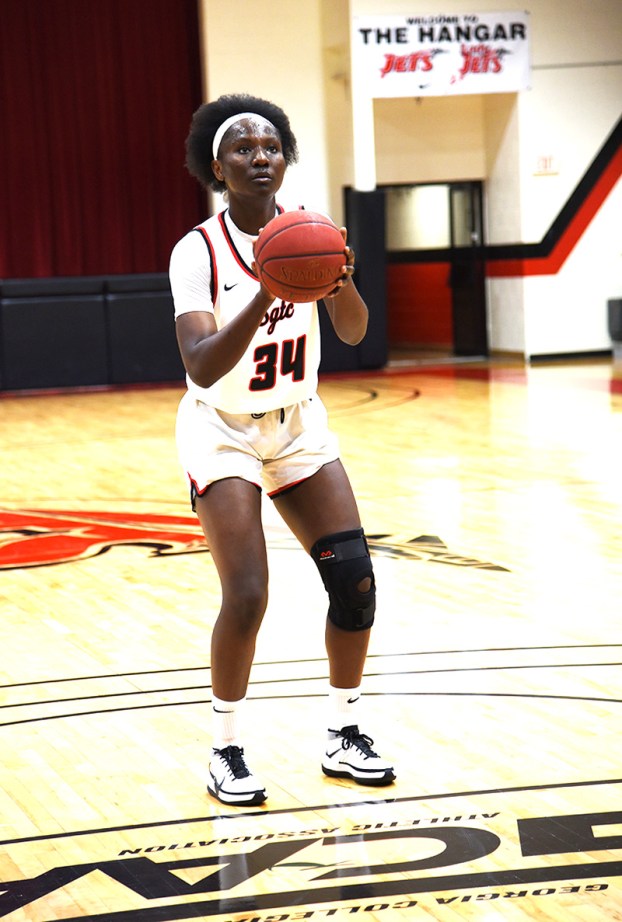 Femme Sikuzani, (34) sophomore center for the Lady Jets, was tied for first place in the nation in free throw percentage shooting with a perfect record from the foul line. Photo by su Ann Bird

Trinity Valley Community College remained in the top position this week followed by Northwest Florida State College.  South Plains College had been in the number three spot but they lost this past week so Chipola College moved to 3rd in the nation and South Georgia Technical College went from fifth to fourth place.  South Pains College is now 5th with a 3 – 1 overall record. SGTC is the only team from Georgia listed in the NJCAA top 25 rankings.

In addition to the 4th place team ranking, SGTC had eight individual players that were recognized nationally for their individual efforts.  Sophomore center Femme Sikuzani, who stands at 6’ 5” from Goma, DRC, earned national recognition in five different categories.  She is currently tied for first place in free throw percentage shooting hitting with a 100% success rate.  She went to the foul line twice last week and sank both of them.  Her field goal shooting percentage also placed her 37th in the nation.  She is hitting 55% of her shots under the basket.

Sophomore shooting guard Imani McNeal from Locust Grove, GA, has scored a total of 61 points this season which allowed her to earn the 44th place ranking in the nation.   Two other sophomores, Hope Butera, 6’ 3” from Kigali, Rwanda, and Flore Ngasamputu, 6’ 2” from Kinshasa, DRC, are also listed nationally for their individual efforts this season. Butera is listed as 27th in the nation in total rebounds with 37 and Ngasamputu, 6’ 2” is currently 49th in free throw percentage shooting with a 92.3 success rate.