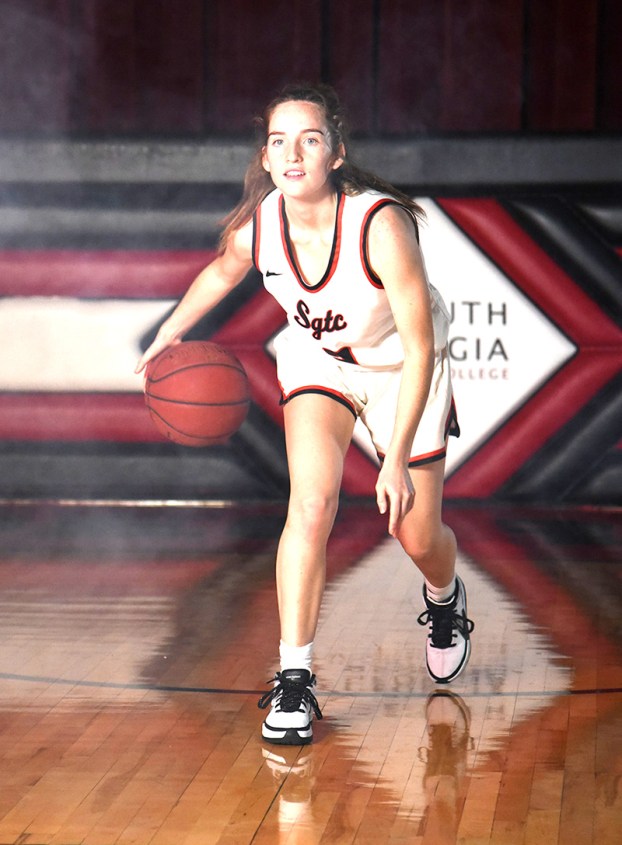 SGTC freshman guard Abby Solway (3) led the Lady Jets in scoring against Shelton State with 15 points. She hit five three-pointers in the first half. Photo by Su Ann Bird

TUSCALOOSA, AL – The 5th seeded National Junior College Athletic Association’s (NJCAA) Division I South Georgia Technical College Lady Jets (SGTC) handed the 7th ranked Shelton State Lady Bucs an 86 – 46 defeat on their home court in Tuscaloosa, AL on Sunday, January 31.  This was the second time in seven days that the Lady Jets had defeated Shelton State.  The first game was an upset in Americus in a 71 – 66 intense battle.  In the second match-up the Lady Jets dominated and won by 40 points.

“Shelton State is an incredibly hard place to go and win,” said South Georgia Technical College Athletic Director and Lady Jets head women’s basketball coach James Frey.  “Coach Thompson has done a fantastic job for 23-years building a dynasty there.  To be able to go over and play our best game is a testament to our young ladies and their willingness to be coached.

“The Lady Jets did exactly what we had in our game plan defensively and that was to slow down Shelton’s two high scoring guards.  And offensively, we shot the lights out.  We were 10 of 16 from the three-point line and I think 33 of 66 overall from the field.  Abby Solway made five 3’s in the first half that really got us going.  We had very balanced scoring with three players in double figures and three others very close,” said Coach Frey.

The Lady Jets scored first in the match-up and were up by as many as 11 points before Shelton State closed that game to 20 – 16 at the end of the first quarter.  South Georgia Technical College came out strong in the second quarter and outscored Shelton, 22 – 4 to take a 42 – 20 lead into the half.  The third quarter saw both teams only score 13 points apiece but in the fourth quarter the Lady Jets outscored Shelton 31 – 13 to win 86 – 46.

The Lady Jets moved to 5 – 0 in the young season.  The dominate win over Shelton State will probably propel the Lady Jets even higher than 5th place in the nation this week.  “It is great to win top 10 matchups, especially on the road,” said Lady Jets head coach James Frey, who added, “but to keep everything in perspective it is only one game.  We start our real season on Tuesday in Cuthbert against Andrew College and if we don’t continue to work and improve anything can happen.  We want to win every time we step on the floor and through five games, we’ve done so.  We have a long way to go but I love our team’s mental makeup and toughness.  We really like to defend and teams that can defend, can go a long way!”

Freshman Abby Solway, 5’ 5” guard from Queanbeyan, Australia, led her team in scoring with 15 points, all three pointers in the first half.  She was followed by sophomore center Femme Sikuzani, 6’ 5” from Goma, DRC, who tossed in 14 points and pulled down 10 rebounds.  She also had two blocks and a steal.  Sophomore point guard Moe Shida added 12 points, four rebounds, six assists and three steals.

The Lady Jets travel to Andrew College on Tuesday, Feb. 2nd for their first conference game at 5:30 p.m. and then host Andrew College in the Hangar on Thursday at 5:30 p.m.  The two teams meet up for a third match-up on Saturday, Feb. 6th in Cuthbert at 1 p.m.  The Jets travel to Tallahassee tonight for a rematch with the 3rd ranked team in the nation at 7 p.m. and then take some time off before hosting USC Salkehatchie at 3 p.m. in the Hangar on Saturday, February 6th.