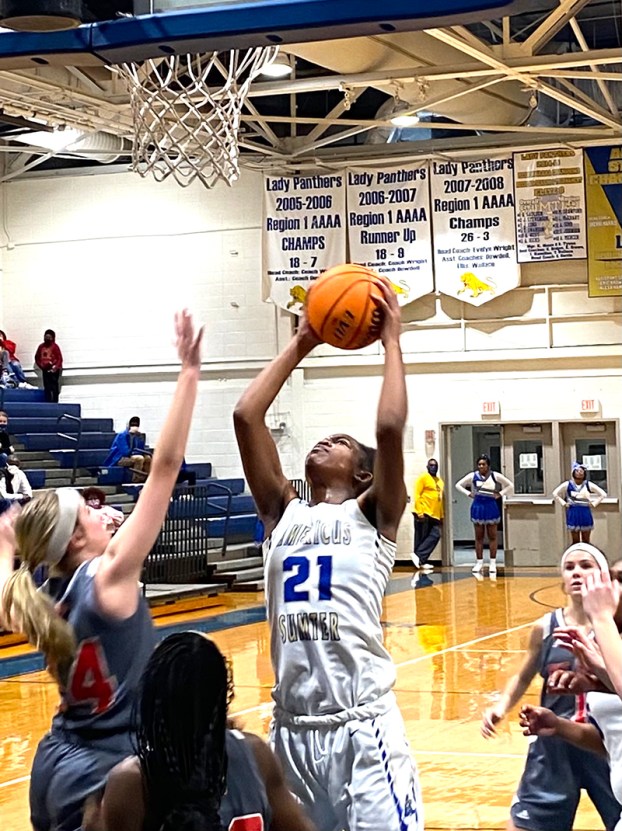 AMERICUS – After an evenly played first half, after which the Lady Panthers trailed 19-17, the Americus-Sumter Varsity Girls’ Basketball Team (ASHS) went on a 10-0 run against the Lady Pirates of Pike County (PCHS). From that point on, the Lady Panthers were able to take control of the game and went on to defeat PCHS 55-35 on Tuesday, February 2, at the Panther Den. 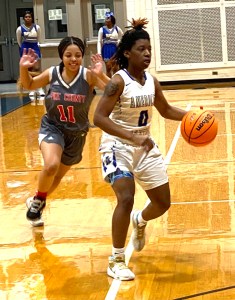 Americus-Sumter senior point guard Destinee Sims (0) scored 16 points in the win over the Lady Pirates. Twelve of those points came from four made three-pointers.
Photo by Ken Gustafson

While she was pleased with her team’s victory, ASHS Head Coach Sherri Harris knows that there are still a lot of things that need to be cleaned up soon if the Lady Panthers want to make a run to another state championship.

Trinity Jackson once again led the Lady Panthers in scoring, as she poured in 17 points to lead the way. Destinee Sims was also in double figures with 16 points and Tiffani Goodman chipped in eight points in the winning cause.

With the win, the Lady Panthers improve their overall record to 12-3 and are in second place in the Region 2-AAA standings at 9-3. The undefeated Lady Knights of Upson-Lee (18-0, 13-0 Region 2-AAA) sit a top the region in first place.

With the loss, the Lady Pirates drop to 10-6 overall and are currently in fourth place in the Region 2-AAA standings at 7-6. PCHS had two players score in double figures. Zy Thompson led the Lady Pirates with 13 points and Jamie Corbin chipped in 10.

Trailing 19-17 at halftime, the Lady Panthers scored 10 unanswered points to take a 27-19 lead. Later on in the third quarter, the Lady Panthers were leading 38-26 before Sims drilled a three-pointer with a little over three minutes left to extend the lead to 15. Sims scored a total of eight points in the third quarter, including two three-pointers, to lead the ASHS attack. 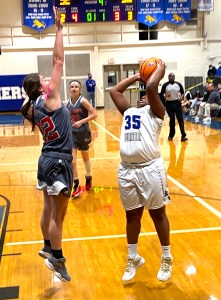 Though the Lady Panthers were in control of the game, they still had problems with turnovers, which gave the Lady Pirates opportunities to get back in the game. However, PCHS was not able to capitalize and missed several easy layups.

Up next for the Lady Panthers is a region home game against Mary Persons on Friday, February 5, at 6 p.m.

AMERICUS – About a month ago, the Americus-Sumter Varsity Boys Basketball Team (ASHS) bludgeoned Pike County 86-6 in Zebulon. It... read more