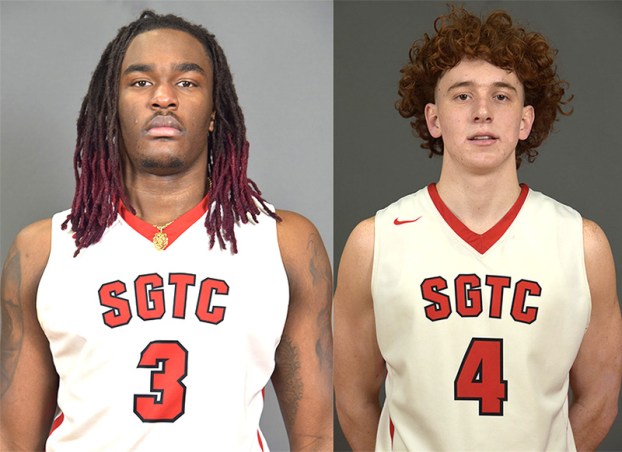 Shown above are SGTC men’s basketball players Jalen Reynolds (3) and Will Johnston (4) who were both included in the NJCAA Division I men’s basketball individual rankings this week. Photo by Su Ann Bird

Freshman point guard Will Johnson, 6’ 2” from Sydney Australia, has garnered respect for his shooting ability in his first intercollegiate season in the USA.  He is currently tied for 44th in the nation in total points scored this season.  He has a total of 77 points over five games.  He has started all five games for the Jets and is making 40% of his shots from the field, 29.6% of his three-point attempts and 85.2% of his free throws.

Despite the outstanding play from these two individuals and others on the SGTC squad, the Jets have gotten off to a slow 1- 4 non-conference start.  The Jets dropped two games to Tallahassee Community College, which has been ranked 2nd and 3rd in the nation, lost to Chiploa, which had an honorable mention in the national rankings, defeated Northwest Florida State, ranked 23rd nationally, and lost to the 22nd team in the nation, USC Salkehatchie.