AMERICUS – For three ASHS seniors: Destinee Sims, Trinity Jackson and Natasha Jackson, Friday evening, February 5, was their final regular season game in a Panther uniform. They all went out in style, as the Americus-Sumter Lady Panthers (ASHS) took control of the game early and ripped the bark out of the Lady Bulldogs of Mary Persons by the score of 68-31 in the Panther Den.

The fourth senior on the Lady Panthers’ squad, Nyja Carson, was not able to play due to COVID-19 issues and had to be quarantined (Carson does not have the virus). She will be honored in a separate ceremony at later date.

According to ASHS Head Coach Sherri Harris, her club still has improvements to make going into next Thursday’s GHSA Region 2-AAA semifinal game, but she sees progress being made.

“It’s getting a lot better. We’re getting a lot better defensively,” said Harris. “We’re still making too many mistakes in the half-court offense. We hope this can take us on into the next chapter.” The Lady Panthers will host one of the semifinal games of the GHSA Region 2-AAA Tournament on Thursday, February 11, at 6 p.m. 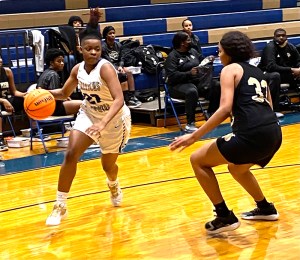 With the win, the Lady Panthers finish the regular season at 13-3 and finish in second place behind Upson-Lee in the Region 2-AAA standings at 10-3. They will be the #2 seed in next Thursday’s region semifinals. ASHS was scheduled to host Jackson in their final regular season game on Saturday, February 6, but that game had to be canceled due to COVID-19 issues involving the JHS Lady Red Devils. 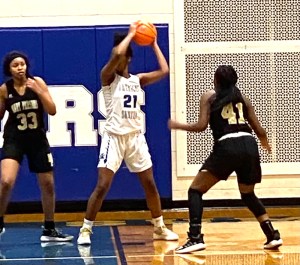 Americus-Sumter senior center Trinity Jackson gets a defensive rebound and is looking to pass. Jackson scored 12 points in the win over the Lady Bulldogs on Senior Night.
Photo by Ken Gustafson

ASHS jumped out to an 11-0 lead in the first quarter. That run was capped off by a three-pointer by Sims. The Lady Bulldogs were held scoreless until the last minute of the quarter when Quenesha Brown scored. A few seconds later, Sims drilled another three-pointer to give the Lady Panthers a 14-2 lead going into the second quarter.

The rout continued in the second quarter, as ASHS outscored MPHS 19-5 in the quarter to take a 33-7 halftime lead. Sims scored 11 of her 25 points in the first half and nine of those points came on her three three-pointers in the first half.

However, ASHS struggled early in the third quarter and the Lady Bulldogs were able to go on a 6-1 run over the first three minutes. The Lady Panthers struggled to score in their half-court offense. They were able to finally show some life when Goodman scored via dribble penetration and was fouled. She made the free throw to complete the three-point play and ASHS had a 38-15 lead. 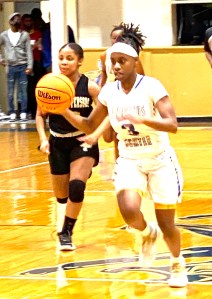 Fortunately for the Lady Panthers, their full-court press was able to force turnovers in the second half and they converted points off those turnovers. As a result, they were able to amass a 43-19 lead until Sims drained another three-pointer. Then with just a few seconds left before the end of the third quarter, both a personal foul and a technical foul were called against the Lady Bulldogs, giving the Lady Panthers a total of four foul shots. Sims was able to make two of the four free throws to give ASHS a 48-19 lead by the start of the fourth quarter.

ASHS came alive in the fourth quarter by going on a 13-2 run, which included three-pointers from Sims and Natasha Jackson. The Lady Panthers continued to dominate the rest of the way and secured their 68-31 win.

The loss drops MPHS to 2-17 overall and 0-13 in the Region 2-AAA standings. T.T. Brown led the Lady Bulldogs in scoring with seven points.

Up next for ASHS is their Region 2-AAA semifinal at the Panther Den on Thursday, February 11, at 6 p.m.

DeMott swims his way to state title for Americus-Sumter