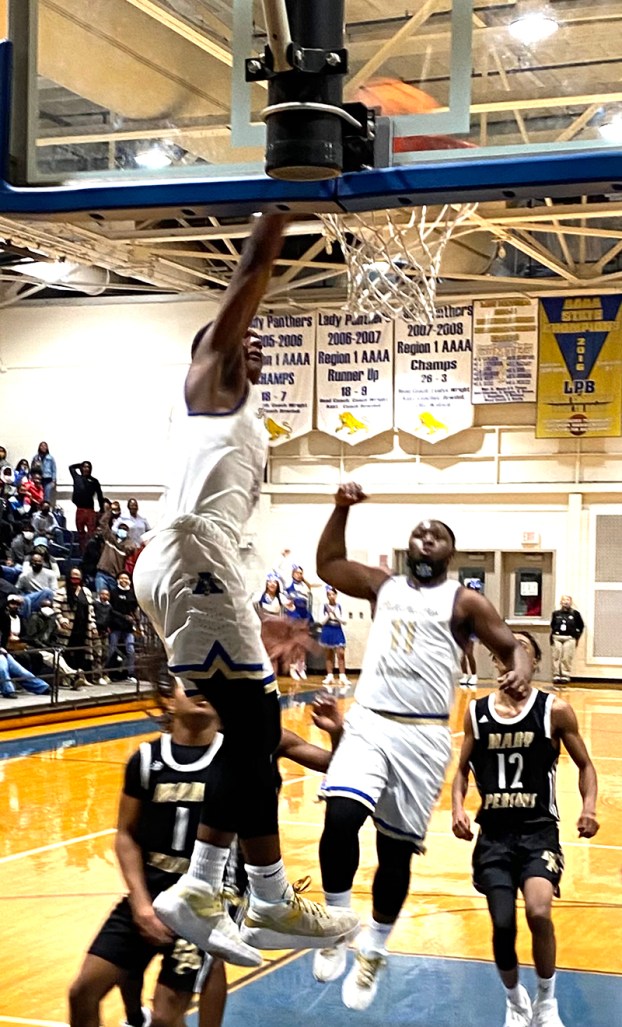 Americus-Sumter senior forward Keldrick Flemming throws down one of his two one-handed dunks in the second half. Flemming led the Panthers with 26 points in the win over Mary Persons on Senior Night. Photo by Ken Gustafson

AMERICUS – For six Americus-Sumter (ASHS) seniors: Keldrick Flemming, Darian Mitchell, Jawaski Whitehead, Jordan Wiley, Michael Johnson and John Monts, Friday’s 77-52 win over Mary Persons on Senior Night will be one they will never forget. After blowing a double-digit lead in the first half and leading by only one point at 31-30 in the third quarter, these seniors, along with their Panther teammates, found a way to regroup in the second half. In the latter part of the second half, the Panthers went on an offensive explosion. They outscored MPHS 28-9 and dominated the game from then on out.

“We had a big lead and I think we got complacent,” said ASHS Head Coach Johnny Genwright. “We started turning the ball over and we stopped playing defense. During halftime, I had a talk with them. I told them that I want us to pick it up on defense and not worry about the offense tonight. Just pick it up on defense in the second half. Defense made up our offense and that’s what we needed.” 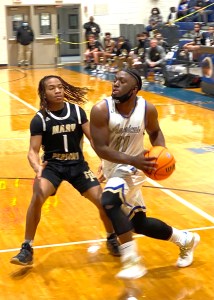 Genwright was particularly pleased with how his six seniors handled themselves during this emotional game on Senior Night. “My seniors, they played well. They were very aggressive. They played good together, even all five of them starting for the first time together. They played very well. It was a great Senior Night and I’m proud of them.”

Senior forward Keldrick Flemming once again led the Panthers in scoring. On this night he poured in 26 points to lead all scorers. Freshman guard Cameron Evans was in double figures with 12 points and senior forward Darian Mitchell scored 11. 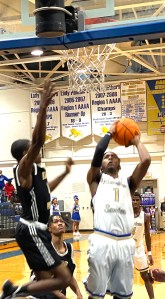 With the win, the Panthers improve their overall record to 14-3 and they have clinched the GHSA Region 2-AAA regular season championship with a record of 11-3. As a result, ASHS will be the #1 seed in the region tournament and will get an automatic bid into the Region 2-AAA semifinals. The Panthers will be hosting one of the semifinal games on Thursday, Feb 11, at 7:30 p.m.

The Panthers jumped out to a 25-11 lead in the first half and would later increase their lead to 31-13. However, the Bulldogs would not go quietly. MPHS guards Alex Brown and JoJo Braswell knocked down a combined three shots from beyond the arc. Brown and Braswell were able to key a 12-0 run for MPHS to close out the first half. During this portion of the game, the Panthers struggled in their half-court offense, committed turnovers and weren’t able to knock down shots. Their double-digit lead had quickly been trimmed down to six by halftime at 31-25. 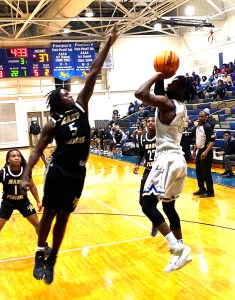 The third quarter began the same way the first half ended. The Bulldogs continued their hot streak by scoring five unanswered points, including another three-pointer by Brown, to get to within one at 31-30. Fortunately for the Panthers, they had a response. ASHS went on a 12-1 run over the next few minutes that was capped off with a three-pointer by Flemming. Brown would strike back with another three-pointer for MPHS, keeping the Bulldogs within striking distance. He struck again shortly thereafter by hitting a jumper, bringing the Bulldogs to within six at 45-39.

However, as they have done throughout the season, the Panthers responded to adversity. They went on a 6-0 run that was capped off by an ally-oop one-handed dunk by Kyric Davis off a pass from Cameron Evans. That dunk continued to fuel the momentum for ASHS and the Panthers continued their onslaught with another 7-0 run to build a 58-39 lead. 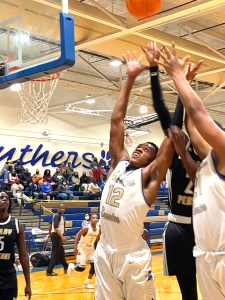 Americus-Sumter senior John Monts (12) and his teammate, sophomore guard Devon Dowdell (21) both go up to try and corral a rebound against Mary Persons. Monts scored four points in the Panthers’ win on Senior Night.
Photo by Ken Gustafson

However, the next sequence of events totally sealed it for the Panthers. Flemming scored on two back-to-back one-handed dunks to effectively drill the final nails in the coffin of MPHS. From that point on, the Panthers continued to dominate, and with the big lead, Genwright was able to give his younger players some valuable playing time.

Two of those players, Canaan Jackson and Anthony Tyson, both scored during the last minute of the game to complete the Panthers’ 77-52 victory.

With the loss, the Bulldogs drop to 10-11 overall and are 6-7 in the Region 2-AAA standings. Brown led the Bulldogs in scoring with 17 points and connected on five three-pointers. 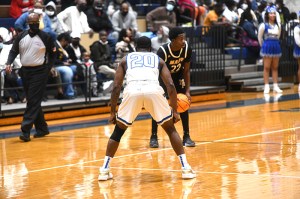 Before their region semifinal game takes place next Thursday, the Panthers will have one more regular season game left. They host the Red Devils of Jackson High School on Saturday, February 6, at 6 p.m. This game was originally scheduled for 7:30 p.m., but due to the fact that the ASHS girls’ game has been canceled due to COVID-19 issues involving the JHS girls’ team, the boys’ game has been moved up to 6 p.m.