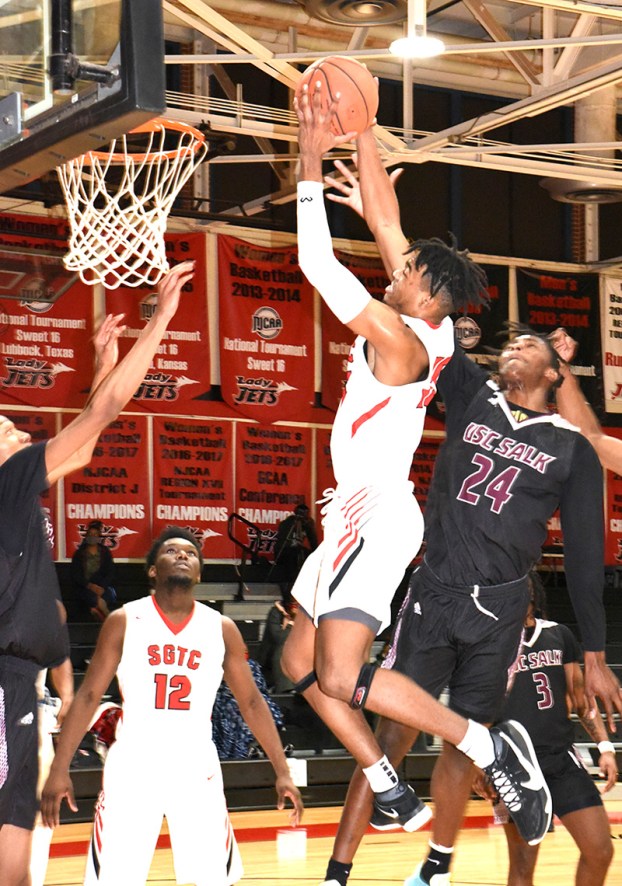 SGTC freshman guard Marvin McGhee (10) was the top scorer for the Jets with 20 points in their upset win over USC Salkehatchie Saturday. Photo by Su Ann Bird

AMERICUS – The South Georgia Technical College (SGTC) Jets upset the nationally ranked USC Salkehatchie Indians 95 – 85 in the Hangar on Saturday, while the SGTC Lady Jets moved to 3 – 0 in the Georgia Collegiate Athletic Association (GCAA) with a 74 – 66 win over Andrew College in Cuthbert, GA.

The Jets moved to 2 – 4 on the season, while the Lady Jets are now 8 – 0 overall and 3 – 0 in the GCAA conference.  Both of the Jets wins this season have come against nationally ranked opponents.  The Jets defeated 23rd ranked Northwest Florida State College 77 – 73 on the road before upsetting the 22nd ranked Indians 95 – 85 in the Hangar. The Jets lost to USC Salkehatchie 83 – 62 in their first meeting this season.

“This was a great win,” said South Georgia Technical College Jets interim head coach Chris Ballauer.  “We didn’t play well against them in South Carolina last week, but I am very proud of the way we came back to beat them here just six days after that first meeting.”

The Jets were without the services of starting point guard Will Johnston and Nikola Sasaroga, who were both out with sprained ankles.  “Our conference season starts this week and we just decided to hold off on putting them on the court in a non-conference game,” said Coach Ballauer.  And as it worked out, the rest of the Jets took care of business.

Five Jets scored in double-figures against the Indians.  Freshman guard Marvin McGhee (6’ 4”) from Atlanta, led the Jets in scoring with 20 points.  He also had 12 rebounds, five assists and two steals on the night.  Sophomore guard Jordan Stephens (6’ 5”) from Macon, GA, was close behind with 16 points, two rebounds, three assists, and two steals.  Freshman point guard Kadeem Wilks (6’2”) from Boynton Beach, FL, came off the bench to score 14 points.  He was four of six from the three-point line.

Sophomore Tobais Long, (6’ 5”) forward from Conyers, GA, had a total of 12 points on the night, including hitting four of four from the foul line.  He was followed by freshman guard, Dhal Fleg (6’ 3”) from Canberra, Australia, who had 11 points on the night.  Josh Pain, (6’ 3”) guard from Sydney, Australia, came off the bench to toss in eight points, sophomore forward Jalen Reynolds had 12 rebounds and six points, and then freshman guard Keundre Campbell (6’ 3”) from Preston, GA had five points including hitting three free throws in the final minutes of the game.  Kallin Fonseca, freshman guard from Breaux Bridge, LA, closed out the scoring with three points.

The Jets scored first against USC Salkehatchie and took an early 7 – 0 lead.  The Indians came back, but the Jets were able to take a comfortable 54 – 31 lead at the end of the first half.  The Jets drilled 10 of 16 three pointers in the first half, while USC was only one of 10.

South Georgia Tech stretched that first half lead to 31 points early in the second half but the Indians pulled within six points with 1:14 seconds remaining in the game.  South Georgia Tech played smart basketball and clinched the victory with 10 points to spare.

And just two hours before the Jets won, the Lady Jets managed to beat Andrew College for the third time in seven days.  The Lady Jets wound up with a 74 – 66 victory in what SGTC Athletic Director and Lady Jets head coach James Frey said was not pretty at all.  “I have to give Andrew College credit.  They got after us.  They came ready to play and we didn’t play well at all,” said Frey. “It is hard to get up for a game after you beat a team by 40 points just two days earlier, but we need to realize that we have to show up for every game or we can lose on any given night.”