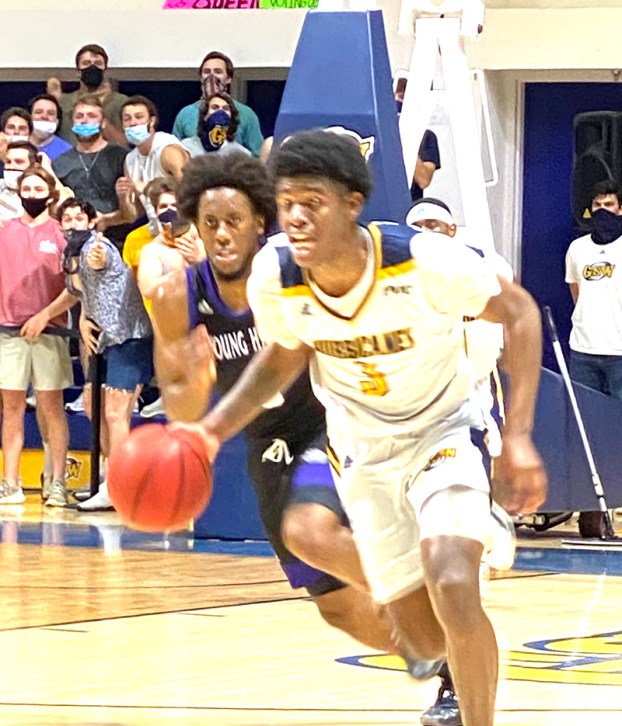 AMERICUS – Led by GSW freshmen Jarrett Adderton and C.J. Hood, the Georgia Southwestern State University men’s basketball team showed what having the heart of a champion is all about. Hood and Adderton combined to score 57 points and grabbed a total of 16 rebounds to rally the Hurricanes to a come-from-behind 108-105 victory in overtime over Young Harris College Wednesday evening, February 10, in the Storm Dome.

“This team continues to impress me, especially after the year we had last year,” said GSW Head Coach Aaron Coombs. “We have talked a lot over the last couple of months about our toughness and bending and not breaking. I would say the last four or five games, we’ve had moments where we’ve overcome adversity and we bend and we bend and we bend. We have really good leadership in this group. Kahlon Whitely and Noah Lewis, our two captains, are as good as they come. We don’t break. This team doesn’t know how to break. It’s a special group. I’m very lucky to be coaching these guys every day.” 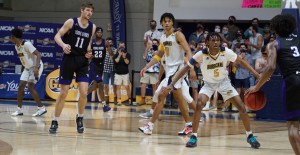 Whitely showed his leadership on the court by recording his first career double double for GSW, as he dished out 11 assists to go with his 12 points. Lewis was also in double figures with 10 points and almost posted a double double, as he grabbed seven rebounds on the night.

GSW has now won three in a row and improves to 9-3 overall this season and 7-3 in the Peach Belt Conference (PBC). Young Harris dropped its second straight game to fall to 4-6 overall and 4-5 in the PBC.

The Mountain Lions got off to a fast start and jumped out to an 8-0 lead in the opening three minutes. GSW eventually tied the game at 26-26, but trailed 47-43 at the break.

YHC opened the second half on an 8-2 run to push its lead back to double figures, 55-45. The Hurricanes trailed by 12 with five minutes left in regulation and by 11 with 3:10 to go. Adderton started the late rally with a three-pointer and kicked off a stretch where the Hurricanes freshmen duo combined for eight consecutive GSW points. Junior Jordan Furlough made the home crowd go into a frenzy when he nailed a three-pointer with 1:26 remaining that shaved the deficit to three points at 93-90. Furlough had one more clutch three-pointer left to deliver when he tied the game at 95-95 with seven seconds left. 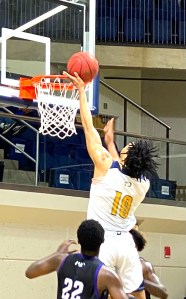 GSW junior forward Noah Lewis (10) goes up and scores on a layup. Lewis scored 10 points and grabbed seven rebounds in the win over YHC.
Photo by Ken Gustafson

In the extra period, GSW grabbed its first lead of the night, 99-97, on an Adderton layup with 3:53 remaining. Adderton calmly sank a pair of free throws at the 1:23 mark to put GSW up 104-101 and did the same thing with 31 ticks on the clock to make the score 106-103. It was Hood who delivered, what would prove to be the dagger, with his two free throws with 18 seconds to go. 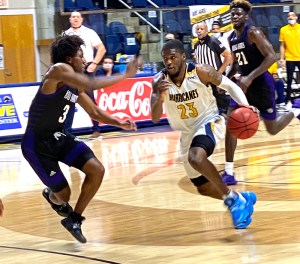 Hood finished with 30 points, five rebounds and four assists. Adderton poured in 27 points and recorded his first collegiate double-double by leading all players with 11 rebounds. Donte Tatum added 14 points and Furlough turned in his best performance of the season with 13 points behind 5 of 9 shooting.

YHC got a double-double from Jacorie Archie with 24 points and 10 rebounds. Alphonso Willis scored 30 points and Brian Free chipped in 20.

The Hurricanes travel to Milledgeville, GA on Saturday, February 13, for a showdown with Georgia College (7-2, 7-2 PBC), before returning to Americus for a pair of games in the Storm Dome during GSW Homecoming Week.