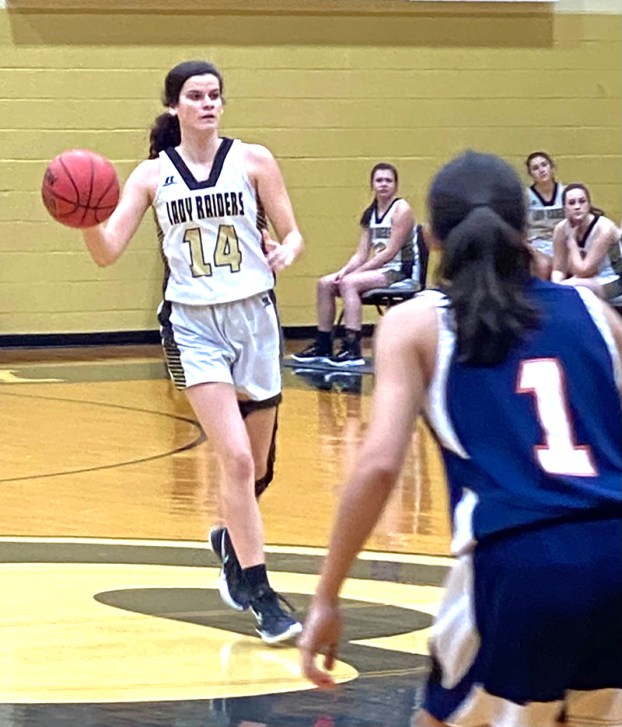 AMERICUS – After drubbing Tiftarea Academy 44-9 the night before, the Southland Academy Lady Raiders (SAR) came into Wednesday’s Senior Night game against Valwood poised and ready to send their five seniors out on a winning note.

For those five SAR seniors; Katie Rogers, Haleigh Warren, Reese Roland, Holly McCain and Maddie Crisp, it was a night they and their teammates will never forget.

With all five seniors starting the game, the Lady Raiders jumped out to a 13-1 lead and dominated the Valiants for the rest of the contest on their way to a 57-10 rout of Valwood Wednesday evening, February 10, at the Melvin Kinslow Gymnasium.

“It was just a great team effort all the way around,” said SAR Head Coach Ty Kinslow. “That’s what makes you proud as a coach is when everybody gets to play, knows their role, plays hard and knows their rotation. The thing is that some of our toughest games are in practice. We’ve got a great team here that pushes each other and that’s what it’s all about. That’s why we’re improving so much this year. It’s because of our practices and how hard our girls push each other.” 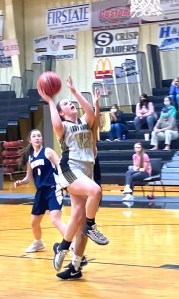 SAR sophomore guard Riley Mitchell led the Lady Raiders in scoring with 13 points and senior Holly McCain was in double figures with 12. Senior Haleigh Warren came close to scoring in double figures on Senior Night, as she poured in eight points. Seniors Maddie Crisp and Katie Rogers scored four points and two points respectively and senior Reese Roland chipped in two points in the winning cause.

While this night was for the seniors, other younger players contributed to SAR’s win as well. Lauren Duke poured in six points, Morgan Weaver scored four and both Anslee Rooks and J.C. Bailey each chipped in three points to round out the SAR scoring. 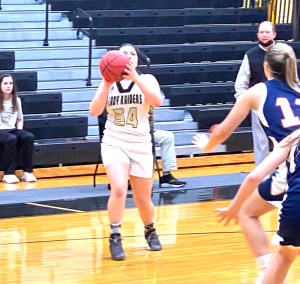 Southland Academy senior Katie Rogers (54) is about to drill a jump schot against Valwood on Senior Night.
Photo by Ken Gustafson

With the win, the Lady Raiders finish the regular season with a 14-3 record and they finish at the top of the GISA Region 3-AAA standings at 6-0. They will be the #1 seed in next week’s GISA Region 3-AAA Tournament to be played at the GSW Storm Dome.

The Lady Raiders took control of the game from its beginning and led at halftime 34-8. On defense, they limited the Valiants’ ability to score and on offense, they were able to score by way of dribble penetration, as well as from the outside.

Both McCain and Mitchell each scored 10 points in the first half to lead the SAR offense. 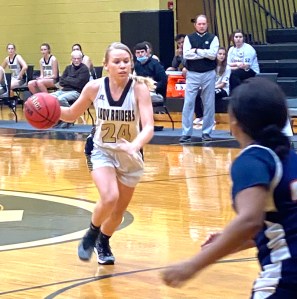 In the third quarter, the Lady Raiders continued to have a stranglehold on the game. They went on an 8-2 run that was capped off by a three-pointer from Warren to give SAR a 42-10 lead. From that point on, however, SAR continued to dominate and didn’t allow the Lady Valiants to score another point the rest of the way.

The huge lead allowed Kinslow to give his younger players some valuable experience and they made the most of their opportunities. Sophomore Lauren Duke came off the bench to score six points and sophomores J.C. Bailey and Anslee Rooks each chipped in three points. On the defensive end, the level of intensity continued to be strong for SAR, as the younger players continued to force turnovers. 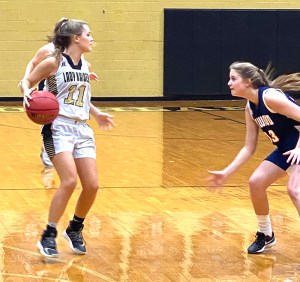 The Lady Raiders have now won six in a row and Kinslow is hoping that his team is peaking at the right time and poised to make a run for a state championship.

“I certainly hope so,” said Kinslow. “Typically, you want to peak at region time. We were playing really good and we had that two-week layoff. I’ve been really proud of how they have come back and played. I think it’s because we have a senior group. They stayed focused and even though we had that two-week layoff due to the pandemic, we’ve come back and played really well.”

The Lady Raiders will now turn their attention to next week’s Region 3-AAA Tournament at the Storm Dome. Their first round game will be against Valwood on Thursday, February 18, at 7 p.m.