Americus-Sumter sophomore point guard Aviyonna Clemons (4) scored 18 points to lead the Lady Panthers to a 64-37 win over Pike County in the semifinals of the GHSA Region 2-AAA Tournament. Photo by Ken Gustafson

AMERICUS – After a slow start in the first quarter, the Americus-Sumter Lady Panthers (ASHS) began to take control in the second quarter and dominated the contest from then on out en route to a 64-37 victory over the Lady Pirates in the semifinal round of the GHSA Region 2-AAA Tournament on Thursday, February 11, in the Panther Den.

In recent games, the Lady Panthers have had their struggles running their half-court offense and with committing turnovers, which gave ASHs Head Coach Sherri Harris cause for concern, but in Thursday’s semifinal game, progress in those areas was made.

“We’ve been working on that for the last couple of weeks…working on our half court offense and our unforced turnovers and actually trying to see what we’re passing to instead of being in just such a hurry,” said Harris. “Normally, we would have played 25 games by now, so we’re right at about 18 or 19 games. With COVID and everything, we just have to pre plan.” One factor that helped lead the Lady Panthers to victory was their containment of PCHS forward Zy Thompson. “We kinda contained the big girl (Thompson). She was killing us a little bit,” said Harris. “She was penetrating and driving and getting everybody into foul trouble. We had to get her under control. Once we did that, we were a whole lot better off and we kinda took her out of the game and put a box and one on her. Once that happened, we were ok.” Thompson was indeed causing problems for the Lady Panthers in the first quarter. She scored seven of her game total of eight points in that quarter, but only made o0ne free throw the rest of the way. 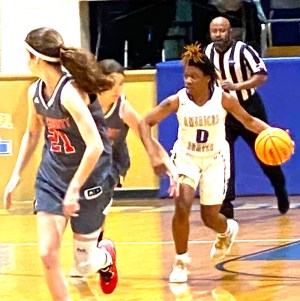 For Harris and her club, the primary objective right now is to win the region tournament. That way, her club will play at home for at least two or three games of the state playoffs, should they advance that far.

While Harris wants her team to play sound, fundamental basketball, she wants them to do it with joy, which is what they did, particularly in the second half. “I tell them all the time. I’m so aggressive. I always tell them, ‘Hey! Go out there and have fun.’ That’s what it’s all about.” said Harris. “Don’t worry about the mistakes. You’re going to make those. It’s just after you make the mistake, make the adjustments. That’s the way we coach them up.”

Aviyonna Clemons led ASHS in scoring with 18 points and Destinee Sims scored 12 points, all of them on four three-pointers. Nyja Carson poured in nine points and Kaylin Holley chipped in eight points in the winning cause. 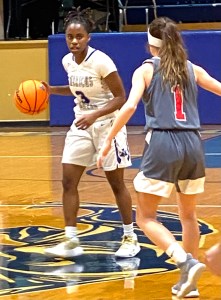 After one quarter of play, the Lady Pirates had an 11-9 lead, but ASHS came to life in the second quarter. One of the reasons for the Lady Panthers’ slow start was that they were struggling with turnovers on offense.

However, ASHS eventually got it together. The Lady Panthers went on a 9-0 run in the early minutes of the second quarter to take an 18-11 lead. Over the next few minutes, both teams went quiet from the field until Sims drilled her second three-pointer of the game with 2:38 left before halftime to give the Lady Panthers a 23-12 lead. Then with 45 seconds left, Sims struck again with her third three-pointer to give ASHS a 26-12 lead at the half.

Sims scored nine of her game high 18 points in the first half and all of them came on three three-pointers.

PCHS had opportunities in the first half to score more points and change the momentum of the game, but missed layups and missed foul shots would end up proving costly to the Lady Pirates. In the first half, PCHS went 4 for 10 from the foul line, while the Lady Panthers went 1 for 3 from the charity stripe. 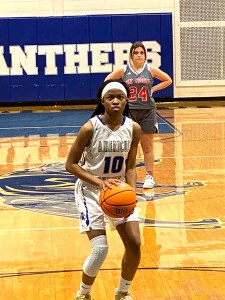 During the first two and a half minutes of the third quarter, the Lady Panthers stormed out of the gate and took total control of the game. They went on an 11-2 run to take a 37-14 lead. They did this by cutting down on the number of turnovers on offense and using their defense to force PCHS into committing turnovers, which is how they normally generate their offense.

By the 4:42 mark of the fourth quarter, ASHS was firmly in command with a 47-27 lead. However, in the waning minutes of the game, the Lady Panthers used their full-court press to generate more turnovers and points off turnovers. As a result, ASHS outscored the Lady Pirates 17-10 over the last couple of minutes to secure their 64-37 tournament semifinal victory.

With the win, the Lady Panthers improve to 14-3 on the season.

Ja’Kaya Drayan and Jamie Corbin both led PCHS in scoring with 12 points each.

The scene for the Region 2-AAA Girls’ Championship Game now shifts to Upson-Lee High School (ULHS) in Thomaston on Friday, February 12. Being that the undefeated ULHS Lady Knights (19-0 overall, 13-0 in Region 2-AAA) are the #1 seed, they will host the Lady Panthers in the region championship at 6 p.m. That will be followed by the boys’ region championship game, which will feature the ASHS Panthers against ULHS at 7:30 p.m.

Second half awakening vaults Panthers to victory in region semifinal

AMERICUS – Just like in other games during the regular season, the Americus-Sumter Varsity Boys’ Basketball Team (ASHS) came out... read more