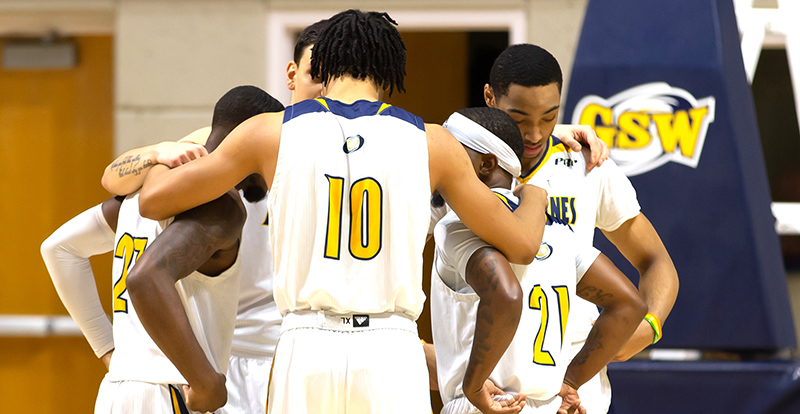 GSW men’s basketball junior forward Noah Lewis (10) is huddled with the rest of his teammates during a timeout. Photo by Christopher Finn

Saturday’s loss to the Bobcats was the sixth straight road loss for GSW in the series with GC. The Hurricanes also had their three-game winning streak snapped and fall to 9-4 overall this season and 7-4 in the PBC.  On the other hand, GC has now won its seventh straight game to improve to 8-2. The Bobcats’ last loss came at the hands of the Hurricanes on Wednesday, Jan. 13, in Americus.

After GSW junior guard Donte Tatum knocked down the first two baskets of the game to stake GSW to a 4-0 lead, GC utilized an 11-0 run to build a cushion it would maintain for the rest of the half. The Hurricanes trailed by as many as 15 points before settling on a 42-29 deficit at the break.

GSW slowly closed the gap, eventually shaving the margin to four points at 58-54 with 9:30 to play, but the Bobcats answered and pushed their lead back to 10 with 6:30 to go. As has been the case throughout the year, the Hurricanes refused to let go of the rope and had one more run left. A three-pointer from Jarrett Adderton with 3:23 left on the clock made it a one-possession game at 70-67.

The Hurricanes forced a missed three-point attempt from GC and had a chance to tie it up, but could not convert. GSW went scoreless the rest of the way and missed its final eight shots.

For the second consecutive game and only the third time this season, the Hurricanes allowed an opponent to shoot at least 50 percent from the floor. After turning in back-to-back games in which the Hurricanes shot better than 77 percent from the free throw line, GSW struggled in that area on Saturday. The Hurricanes managed to connect on only 10 of 21 attempts (47.6 percent). The Bobcats finished with a slight edge on the glass, 40-38, and dished out five more assists, 15-10. Turnovers were even at 16-16. The 11 steals by Georgia College tied for the most by a GSW opponent this season.

Tatum led the Hurricanes with 18 points, eight rebounds, four assists and five steals. Kevin Kone made 6 of 11 shots and 5 of 7 free throws in 17 minutes of action to finish with 17 points. He grabbed five rebounds and added three blocks. Adderton drained three from long range and finished with 13 points.

Jordan Thomas led the way for Georgia College with 23 points. Thomas made 10 of 18 from the floor and added four steals. Kohl Roberts posted a double-double with 16 points and 10 rebounds. Wesley Simpson scored 14 points.

Up Next: The Hurricanes return to Americus for Homecoming Week and their final two home games of the regular season. Clayton State (0-6 PBC) is up first, scheduled for Wednesday at 7:30 p.m.