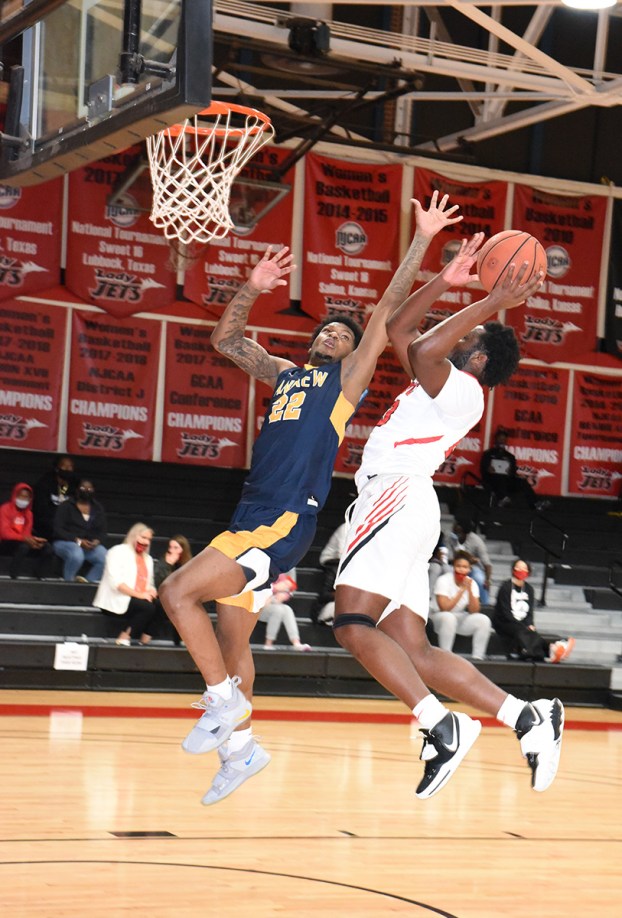 SGTC point guard Kadeem Wilks came off the bench to score 16 points to help lead the Jets to a 93-167 victory over Andrew College. Photo by Su Ann Bird

AMERICUS – The South Georgia Technical College Jets and Lady Jets continued their winning ways and both remained undefeated in the Georgia Collegiate Athletic Association (GCAA) conference Saturday when the Lady Jets opened up with their third consecutive win over the Central Georgia Technical College Lady Titans 83 – 44, to move to 6- 0 and 11 – 0 overall.  The Jets followed up with an impressive 93 – 67 win over Andrew College.  They are now 3 – 0 in the GCAA and 5 – 4 overall.

“We had two good wins Saturday,” said South Georgia Technical College Athletic Director and Lady Jets head coach James Frey.  “I thought the Lady Jets played better overall and then the Jets came out and did what they needed to do to take a win over Andrew College.  It was a good day for both teams.”

The Lady Jets should move up from their 4th place national ranking by the National Junior College Athletic Association (NJCAA) this week after they remained unbeaten and two of the other top four teams lost.  The Lady Jets started out slow and were behind as many as seven points in the first quarter against Central Georgia Tech before coming back to tie the game at 14 – 14 going into the second quarter.

The Lady Jets had their best quarter so far this year scoring 32 points and only turning the ball over twice in the second period.  They outscored Central Georgia Tech 32 – 14 to go up 46 – 28 at the half.  They continued to hold Central Georgia Tech to eight points in the third and four quarters and clinched the 83 – 44 victory. 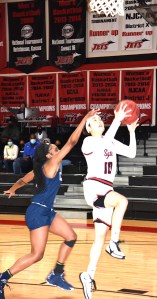 Freshman guard Jaidyn Trevino from Austin, TX, made three three-pointers to walk away with nine points on the day.  She also had four rebounds and one assist.  The remainder of the scoring was spread out with Hope Butera with 6, Sarah Lwambo, 5, Maikya Simmons, 4, and Abby Solway, Flore Ngasamputu, and Femme Sikuzani with 3 points each.

After the 39-point victory by the Lady Jets, the Jets followed suit and took an 93 – 67 impressive win over the Andrew College Fighting Tigers to move to 5 – 4 overall and 3 – 0 and tied for first place in the conference with Albany Tech.  South Georgia State and Georgia Highlands are tied for second place with identical 2 – 0 records.

The Jets came out strong and allowed Andrew College to take the lead only twice and tie the game three times before advancing to an 18 point lead right before the half.  They took a 46 – 31 lead into the half and never looked back.  The Jets outscored Andrew 47 – 36 in the second half to take the 93 – 67 victory.

Jordan Stephens also walked away with six rebounds and two steals, Marvin McGhee accounted for five rebounds, one assist and one steal and Kadeem Wilks had three rebounds to go with his four three-pointers, one field goal and two free-throws.

Sophomore forward Jalen Reynolds had nine points and 12 rebounds along with three blocks on the night.  Kallin Fonseca and Josh Pain accounted for six points each, Tabais Long added five points, and then Nikola Sasaroga, Will Johnston, and Keundre Campbell each came away with four points. Brandon Avant, Justice Hayes and Radim Havel added two points each and Dhal Fleg closed out the scoring with one point.