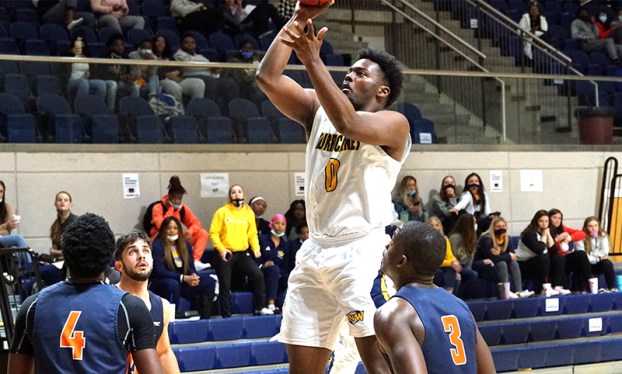 GSW senior guard James Arnold Jr. (0) made the first shot of the Hurricanes’ game against Clayton State and scored the Hurricanes’ final basket of the game to bookend the 80-59 GSW victory over the Lakers on Senior Night at the Storm Dome. Photo by Christopher Finn

GSW Hurricanes storm to victory on a sensational Senior Night

AMERICUS – GSW senior guard James Arnold, Jr. made the first shot of the game and sent the Georgia Southwestern State University men’s basketball team off to the races in an 80-59 win over Clayton State University Wednesday evening, February 17, in the Storm Dome. The Hurricanes never trailed and fittingly, Arnold put an exclamation point on Senior Night by scoring the final Georgia Southwestern basket of the game.

GSW has now won four of its last five contests and improves to 10-4 overall this season and 8-4 in the Peach Belt Conference (PBC). Clayton State remains winless on the season at 0-7 and it was the Lakers first road game in over a month.

More importantly, the win puts the Hurricanes one step closer to qualifying for the Peach Belt Conference Tournament.

“We got the job done and we are a step closer to accomplishing one of our goals. That was to play in the Peach Belt Tournament,” said GSW Head Coach Aaron Coombs. Normally, the PBC would have eight teams playing in its post-season tournament, but this year, due to the COVID-19 Pandemic, only four teams will qualify. The winner of the PBC Tournament will get an automatic bid to the NCAA Division II National Tournament. 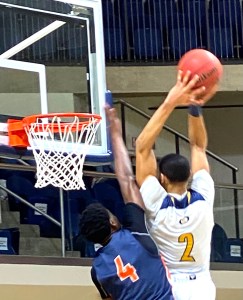 GSW junior guard Devon Higgs (2) goes in for a slam dunk against Clayton State. Higgs posted his third double-double of the season by scoring 18 points and grabbing 13 rebounds.
Photo by Ken Gustafson

GSW jumped out to an 11-2 lead and never looked back. The Hurricanes closed out the first half on a 16-6 run and led 42-31 at the break. GSW picked up right where it left off and opened the second half with a 12-2 burst to stretch the margin to 21 points, 54-33. Clayton State could get no closer than within 16 points the rest of the way.

Both teams finished with five made three-point baskets. The difference in the game was inside the arc, where GSW took care of business by holding a 46-30 edge in points in the paint. On the defensive end, GSW recorded a season-high nine blocks and tied its season low with 17 fouls. The Hurricanes forced Clayton State into eight more turnovers (19-11) and held a lopsided 20-5 advantage in points off those turnovers.

“The staple of this team has to be our defense,” said Coombs. “We’re not going to outscore people. When we go and play better teams like Flagler and Georgia College and so on, we have to commit to defending.” 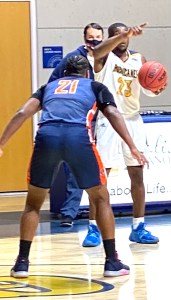 GSW junior guard Donte Tatum (23) directs traffic during one of the Hurricanes’ offensive possessions. Tatum led GSW with 23 points in the victory over Clayton State.
Photo by Ken Gustafson

Donte Tatum led all scorers with 23 points and was nearly perfect from the floor, connecting on 11 of 15 shot attempts for GSW. Devon Higgs collected his third double-double of the season. Higgs scored 18 points and led all players with 13 rebounds. Higgs also added five steals and four assists on the night. The Hurricanes other non-returning senior, Baris Ulker, was recognized, along with Arnold, Jr., in a Senior Night ceremony prior to opening tip. Ulker had to sit out the game with an injury. 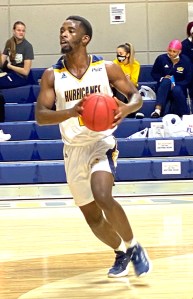 Clayton State had one starter reach double figures in scoring. Stef Korfas led the Lakers with 14 points. Ricardo Saams, Jr. came off the bench to add 13 points behind 5 of 8 shooting. 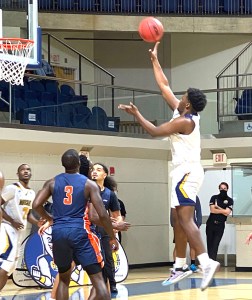 The Hurricanes will jump back into PBC play on Wednesday, February 24, when they travel up to Columbus to take on the Cougars of Columbus State. That game is scheduled to tip off at 7:30 p.m. The final game of the regular season for GSW will be on Saturday, February 27, at Young Harris College in a rematch of the 108-105 overtime thriller won by the Hurricanes back on Wednesday, February 10.  Tip off for the regular season finale at YHC is scheduled for 3:30 p.m.

ELLAVILLE – After having the rest of the 2020 season cancelled after just six games due to the COVID-19 Pandemic... read more