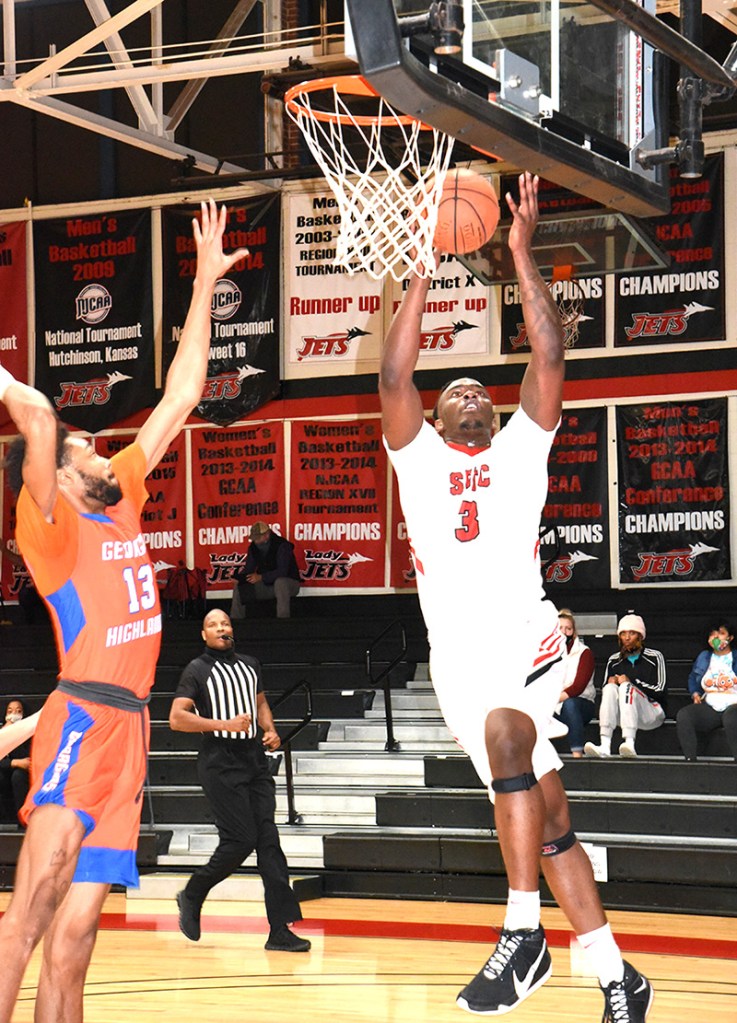 South Georgia Tech sophomore forward Jalen Reynolds (3) struggled early in the first half, but came back strong in the second half to lead the Jets with a total of 24 points and 14 rebounds against Georgia Highlands. Photo by Su Ann Bird

AMERICUS – The 16th nationally ranked Georgia Highlands Chargers brought an end to the South Georgia Technical College (SGTC) Jets five-game winning streak on Thursday, February 18, in an 87 – 72 Georgia Collegiate Athletic Association (GCAA) decision.  Georgia Highlands remains unbeaten this season with a 5 – 0 overall record and are currently in 3rd place in the GCAA with a 3 – 0 record behind Albany Tech, 5- 0, and South Georgia State College, 4 – 0.

“Georgia Highlands was the better team last night.  They just outplayed and outshot us.  We will have to play better Saturday to have a different outcome,” said SGTC Jets interim head coach Chris Ballauer.  “We are capable of playing better, but you have to give Georgia Highlands credit, they took us out of our game plan and forced us to take bad shots.  We just made way too many mistakes to win.”

The Jets started out very slowly missing several easy layups, but they were still able to score first and take a narrow 4 – 2 lead with 16:22 left on the clock in the first half.  That was the last lead that the Jets had all night.  They did tie the game at 14 – 14 with 13:23 remaining in the half, but after that Georgia Highlands took charge and pulled head by as many as 15 points before taking a 40 – 29 lead into half-time.

Georgia Highlands continued to stretch that lead in the second half to as many as 23 points before finally capturing the 87 – 72 victory and retaining their 16th nationally ranked spot in the NJCAA Division I standings.

Even though the Jets came up on the losing end, they had five different players to score in double figures.  Sophomore forward Jalen Reynolds led his team in scoring with 24 points and 14 rebounds.  He played over 35 minutes of the 40-minute contest.  He struggled in the first half and only walked away with eight points at the end of the first 20-minutes.

Sophomore guard Jordan Stephens ended the night with 15 points and eight rebounds for the Jets.  Tabail Long, Marvin McGhee, and Will Johnston each added 10 points.  Long and McGhee both had nine rebounds and Johnson had four rebounds, three assists, and two steals.  Other scorers for the Jets included Keundre Campbell (2), and Joshua Pain (1).

Georgia Highlands had six players in double-figures and they were led by sophomore guard Chris Wright who had a total of 19 points.  Georgia Highlands outshot SGTC from the three-point line, 37% to 21% and also outshot the Jets 42% to 33% from under the basket.