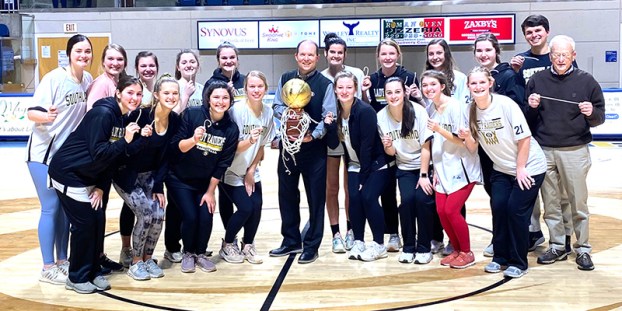 The Southland Academy Lady Raiders are the 2021 GISA Region 3-AAA champions by virtue of their 44-34 victory over Brookwood in the finals of the Region 3-AAA Tournament on Friday, February 19, at the GSW Storm Dome. Photo by Ken Gustafson

AMERICUS – With eight minutes to go in the game, it looked as if the Southland Lady Raiders (SAR) were going to win the Georgia Independent School Association (GISA) Region 3-AAA Championship going away. Going into the fourth quarter, SAR had a 32-15 lead and the Lady Warriors of Brookwood (BHS) had struggled all night on offense, partly due to the solid defense that was being played by the Lady Raiders.

However, BHS is the defending GISA Class AAA State Champion and a team like that will not go quietly, nor did they. During the final eight minutes, the Lady Warriors turned up their defensive pressure and forced SAR into committing several turnovers. BHS was able to score points off those turnovers and got themselves to within nine points late in the game. However, the experience of the Lady Raiders kicked in down the stretch and they were able to hold on and clinch the region title with a 44-34 victory over the Lady Warriors.

Having already beaten BHS twice this season, SAR Head Coach Ty Kinslow knew that his club would be in for a stiff challenge from the defending state champions in the region finals.

“They (BHS) are the defending state champs. They’ve got a good team. They’re not going to go away easily. They’re not going to fold the tent,” said SAR Head Coach Ty Kinslow. “To beat a team like that three times in a year says a lot for these girls that I coach. They’re fantastic. They stay focused. They do everything I ask them to do. We have a good time. I’m tough on them, but we have a good time and they listen. That’s a lot due to their parents. We’ve got a great group of parents, along with these girls. It’s been a fantastic year. We told the girls that we’re going to enjoy that tonight, but that’s not our final goal. We’re going to keep working.” 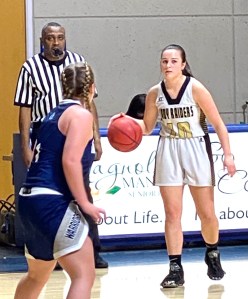 As a result of winning the Region 3-AAA title, the Lady Raiders (16-3) are the #1 seed out of Region 3-AAA and will host the #4 seed from another region in the first round of the GISA Class AAA State Tournament on Tuesday, February 23.

BHS jumped out to a 6-3 lead early in the first quarter, but the Lady Raiders responded with an 11-0 run, which was capped off by a three-pointer from Mitchell. Over the next several minutes of the first half, there was very little scoring as both teams were struggling from the field. Up until the 4:09 mark of the second quarter, the Lady Raiders had been going through a scoring drought until Crisp made one of two free throws to give SAR a 15-9 lead. 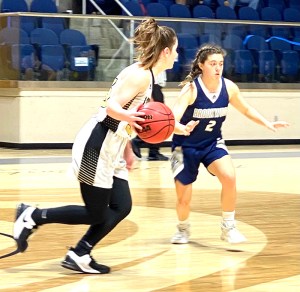 With a little over three minutes left before the half, Weaver drained a jumper to give the Lady Raiders a 17-10 lead. Then with a little more than a minute left before halftime, Warren drilled a three-pointer to give SAR a 21-10 lead. During the closing minutes of the second quarter, the man-to-man defense of SAR was able to limit the BHS offense, which resulted in a lengthy scoring drought for the Lady Warriors. As a result, the Lady Raiders went into halftime leading 23-13.

SAR quickly went on a 7-0 run to start the second half, which was capped off by another three-pointer from Warren. The Lady Warriors were going cold from the field during this period and didn’t score until Ella Grace Squires scored while getting fouled and made the foul shot to complete the three-point play. However, other than that three-point play, the Lady Warriors continued to struggle from the field, while SAR was able to maintain a 32-15 lead going into the final eight minutes.

Crisp was able to open the scoring for the Lady Raiders to begin the fourth quarter, but BHS started to make a run by forcing turnovers and capitalizing on the offensive end. The Lady Warriors went on a 9-4 run over the first three minutes, which was capped off by a three-pointer from Ann Murray Jackson. This prompted Kinslow to call a timeout with 4:53 left. However, BHS continued to force SAR into committing more turnovers. As a result, they were able to cut the Lady Raiders’ lead to 38-29 with about three minutes left. The defensive pressure from the Lady Warriors caused the Lady Raiders to be out of sink on offense and SAR had to call another timeout to stop the run with 2:34 left.

Fortunately for the Lady Raiders, out of the timeout, McCain was able to score off an inbounds pass underneath the basket. However, BHS continued to force turnovers to give themselves a chance to crawl all the way back.

Fortunately for SAR, Crisp was able to score a transition layup and would later knock down two free throws with two seconds left to secure the 44-34 victory and the GISA Region 3-AAA Championship.

The Lady Warriors (10-15) were led in scoring by Erin Lewis, who poured in 10 points. They will be the #2 seed out of Region 3-AAA and will host the #3 seed from another region in the first round of the GISA Class AAA State Tournament.

As for the Lady Raiders, their drive towards a state championship will begin on Tuesday, February 23, when they host the #4 seed out of another region in the first round of the state tournament. Game time and opponent are still to be determined.

Raiders’ bid for a region championship falls short against Brookwood

AMERICUS – After a slow start in the first half, which saw the Southland Academy Raiders score just 15 points,... read more