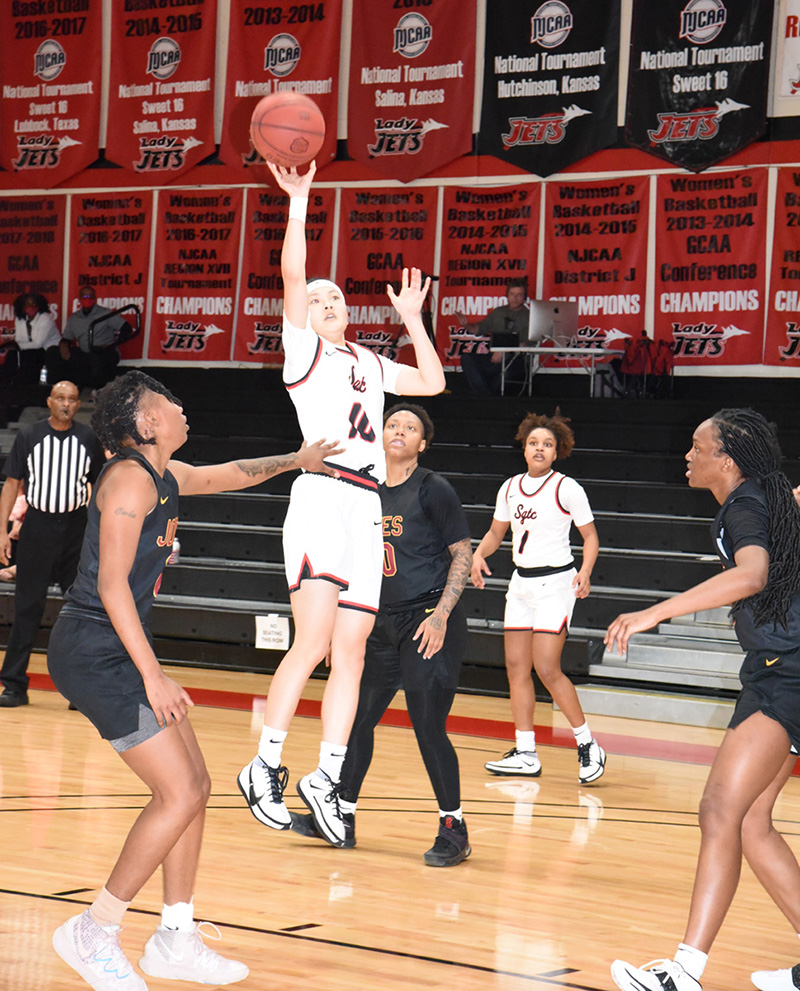 “Hats off to Jones College,” said SGTC Lady Jets head coach James Frey.  “They are very deserving of their ranking.  They started the game supper aggressively and really took it to us.  We went over everything that we saw in the game and Jones did the things we expected them to do, but for whatever reason we didn’t bring anything that we talked about defensively into the game.  We let them do whatever they wanted to do.”

Jones College held the Lady Jets to their lowest scoring game of the season with 57 points.  SGTC is averaging 82.8 points per game and holding their opponents to less than 49 points on the average.  “I told our team after the game, we have to find seven or eight of them that hate losing more than they love winning.  Until we do, we will struggle against high level teams,” said Coach Frey.

“Daisha Bradford (2) and Jayla Alexander (20) are fantastic players for Jones College,” continued Coach Frey.  “They are physical and extremely aggressive.  They also shot the three very well today and that is not their strong suit.  Unfortunately, we gave them wide open looks.”  Bradford led her team in scoring with 21 points and Alexander was next with 18.

The Lady Jets were led in scoring by sophomore guard Moe Shida with 21 points.  She was three of six from the three, and six of eight from the free throw line.  Fifteen of her points came in the first half but in the second half, extra pressure on her allowed Jones to hold her to only six points.  Shida also had four rebounds and two assists

Sophomore guard Veronica Charles was the only other Lady Jet in double figures with 10 points, two rebounds, three assists and one steal.  Sophomore forward Femme Sikuzani and Niya McGuire both had nine points on the night.  Sikuzani pulled down eight rebounds and McGuire had three.  Both had a steal.

Closing out the scoring for the Lady Jets was Imani McNeal with four points and Maikya Simmons and Flore Ngasamputu with two points each.  Despite the score, SGTC out shot Jones from the three-point line 29.4% to 26.9% but Jones hit 80% of their free throws compared to the Lady Jets 60%.  Jones was 37% effective in shooting from the field and SGTC hit only 32.8% of their posts.  Jones got a lot more looks putting the ball up 73 times compared to SGTC’s 61 attempts.

The Lady Jets game against Wallace State in Hanceville on Saturday was cancelled due to COVID-19 restrictions so the Lady Jets will now play New Horizon Prep at 1 p.m. in Americus.  They will be followed by a 3 p.m. game with the Jets hosting Southern Crescent in a conference game.  The Lady Jets will host Georgia Highlands at 5:30 p.m. Tuesday, March 2 and then travel to Rome for rematches on Friday and Saturday.  South Georgia Tech and Georgia Highlands are the only two teams with undefeated conference records.