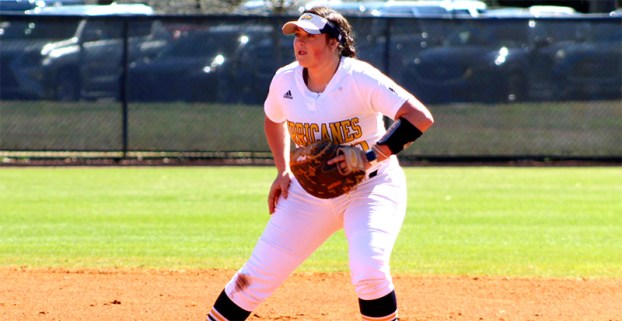 AMERICUS – With bases loaded in the bottom second during Game 2, GSW freshman pitcher Zoe Willis hit her first career grand slam to help lead the Georgia Southwestern State University softball team to a 10-2 victory in five innings against Point University (PU) in a midweek doubleheader.  Willis belted a home run in the bottom of the fifth inning in Game 1, but the Lady Hurricanes came up short in that game by the score of 6-5.

GSW senior infielder Lauren Kuerzi went 6 for 6 at the plate during the two-game series with three home runs and a double, scored four runs and knocked in three RBIs. Willis finished the day going 3 for 5 at the plate with a pair of home runs, six RBIs and four runs scored. Senior pitcher Shannon Gibson had a strong day in the circle for GSW, striking out eight PU batters.

However, things quickly changed for GSW in the top of the fifth inning, as PU scored six runs on four hits. Ansley Dean, who finished pitching for the Lady Hurricanes, replaced Willis, who started in the circle. Willis and Dean combined for seven strikeouts, but Dean took her first lost of the season. GSW was able to get into scoring position twice in the sixth and seventh innings, but couldn’t regain the lead and lost its first home game of the season.

The Lady Skyhawks started Game 2 with a two RBI double to take a 2-0 lead. Fortunately for GSW, the Lady Hurricanes had a seven-run, five hit explosion in the bottom of the second inning that saw them take a 7-2 lead. Kayla Kerr started the inning with a home run into left field, followed by Kuerzi, who hit her second home run of the day. With the bases loaded and one out, Zoeller stroked an RBI single. Willis then followed up and cleared all the bases with a grand slam home run over the left center field wall to give the Lady Hurricanes a 7-2 lead.

However, GSW was still not done. Hailey Pinette hit a home run to start the bottom of the third inning and Kuerzi ended the game in the bottom of the fourth with her third home run of the day. GSW finished with 10 runs on 10 hits in five innings for the split win.

Up next for the Lady Hurricanes (7-2) is a road trip up to Franklin Springs, GA on Sunday, March 7, to take on the Lady Lions of Emmanuel College in a doubleheader. The first pitch of Game 1 is scheduled for 1 p.m.