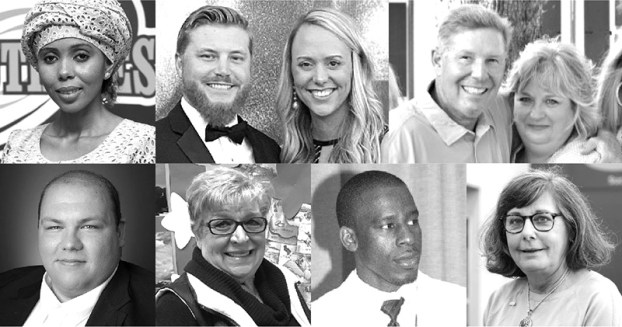 By Chelsea Collins, Director of Marketing and Communications Department of University Relations

AMERICUS – Georgia Southwestern State University (GSW) has announced nine of its most outstanding alumni for their professional and personal achievements as well as their contributions to the University. These individuals will be recognized Saturday, Mar. 13 during the annual Outstanding Alumni Awards Dinner in the GSW Storm Dome.

“Georgia Southwestern would not be the great institution that it is today without our outstanding alumni, friends and partners,” said GSW President Neal Weaver, Ph.D. “This is a special time for the GSW family as we honor graduates who have accomplished a lot in life and contributed to the successes of the University. The 2021 awardees are a unique group, and I am excited about the opportunity to recognize and celebrate these distinguished individuals.”

Each of these awards holds special significance and has different criteria. The 2021 Alumni Awardees are:

More about the outstanding alumni:

After earning her undergraduate degree in history and a master’s in education from GSW, Welch went on to teach U.S. and world history at Southland Academy. She has spent the last 48 years in education. Her life and career have been completely committed to teaching history, with a passion for making it come alive for the thousands of students that have had “Mrs. Welch” as their teacher. Additionally, she has spent 46 years coaching cheerleaders and mentoring young women at a pivotal time in their lives. Welch has also touched the lives of her youngest students while serving as a preschool Sunday school teacher for 45 years at First Baptist Church in Americus.

Welch has written several history articles for various publications, co-authored a book on Georgia history, and is a member of and volunteer for numerous organizations including the Andersonville Guild, the National Council for History Education, and the Americus Junior Service League. Those she holds most dear are her family and friends, including those students who are now adults and whose children she now teaches.

The Aeolian Award is given to an alumnus/alumna who has distinguished his/herself in their profession as well as in their community. This award is chosen based on outstanding lifetime achievement as a distinguished alumni and community leader.

Lamar Radford, or “Johnny Kilroy” as he is affectionately known, has lived and breathed GSW since his college days. Before earning his degree in 2003, Kilroy was actively involved on campus as part of Resident Housing, even serving as statewide director of the Georgia Resident Housing Organization. He held numerous positions as a student, and continues to volunteer his time and talents both off campus and on as a member of the GSW Alumni Association for over 20 years, serving as chair of several committees.

He is a faithful and humble leader and is known for his quiet spirit and love for all things Georgia Southwestern. His support of the University, scholarships, and athletics has made him a well-rounded member of the Alumni Association Board of Directors and a fan of the student experience and development of future leaders on which GSW prides itself.

The Leewynn J. Finklea Award, named in honor of the University’s first alumni director, recognizes individuals who have demonstrated exceptional service to campus life, the alumni association or the University.

While leading the fight against female genital mutilation (FGM) and child marriage in her home county of The Gambia in West Africa, Dukureh was simultaneously earning her bachelor’s degree in business administration and management online at GSW. She graduated in 2015, the same year she founded the non-profit organization Safe Hands for Girls, which provides support for survivors of FGM and advocates for an end to FGM practices. She was part of the movement that successfully banned FGM in The Gambia in 2015, a journey chronicled in the 2017 documentary film “Jaha’s Promise.”

By age 25, Dukureh’s activism earned her a place on Time Magazine’s 2016 list of 100 Most Influential People in the World and on New African Magazine’s 2017 list of 100 Most Influential Africans. She won the Humanitarian of the Year award at the African Diaspora Awards and was named the first Regional Goodwill Ambassador for Africa by UN Women in February 2018. She was the recipient of the 2018 Eleanor Roosevelt Val-Kill Medal which honors individuals who have embraced Roosevelt’s call to build a better world through humanitarian efforts in education, advocacy, social justice, and civil and human rights. Her nomination for the 2018 Novel Peace Prize brought the FGM movement to the forefront.

The Visionary Award is given to an alumnus/alumna who is an entrepreneur or innovator with the commitment to turn a vision into reality, the courage to assume risk, and the ability to make changes and take advantage of new opportunities.

A 2013 GSW graduate, Ryan Garnto took his business degree and immediately put it to work with New York Life. A member of the Million Dollar Round Table (an industry standard for top professionals, approximately 5% worldwide with New York Life), Garnto has won numerous awards with the insurance company.

“He is more than just company-minded,” said his nominator. Garnto regularly serves his community through his work with the Artesian City Sertoma Club, as deacon of Covenant Presbyterian Church in Albany, as an active member of Rotary, and as an alumni advisor for Kappa Sigma, the fraternity he lead as president while an undergraduate at GSW. He serves as a member of the Kappa Sigma Alumni Board and as a member of the GSW Alumni Association. Garnto resides in Leesburg, Ga. with his wife Merrit and their son Andrew.

Young Alumni of the Year is given to an emerging leader making waves in his/her field as a positive role model and positive reflection on the University. The recipient must have attended GSW within the past 15 years. Distinction in one’s career and/or community and service to GSW are also considered.

With two generations, four family members and four degrees between them, the Roderick family is no stranger to the GSW campus. Their contributions to athletics, academic achievements, and to the work of the Foundation span a number of years. Randy, the patriarch of “Team Roderick” played basketball for GSW, graduating in 1981 along with his wife Debbie. Their son Richard “Ric” followed in his father’s footsteps and played collegiate basketball for the Hurricanes for four years, graduating in 2010 with a business degree. He was a member of Kappa Sigma Fraternity. Ric’s wife Shelley Tondee grew up in nearby Ellaville and also graduated from GSW in 2010 with a business degree. Shelley was a member of Kappa Delta Sorority.

The Roderick family founded The Roderick Group in Statesboro, Ga., where they have consistently ranked in the top of all Herff Jones dealers in the country. Herff Jones is a company that manufactures and sells educational recognition and achievement products including class rings, caps and gowns, and much more.

Through their success, the Rodericks volunteer with and support many local charities and give back to numerous communities throughout Georgia. GSW has also been the recipient of their generosity with investment into the athletic department and the GSW Foundation.

The Family Legacy Award recognizes one family with a tradition of attending GSW through multiple generations with continued interest in and support of the University. Outstanding service to GSW, the Alumni Association, their communities and their professions are also considered.

During her playing career with GSW softball, Lou Chase excelled on the field and in the classroom. She graduated with her bachelor’s in education in 1987 and her master’s in 1990. Chase was a four-year letterman, made the 1983-1984 NAIA All-District Team, was named the GIAC MVP, and served as team captain. Upon graduation, Chase was named interim head softball coach and served in that capacity for one year.

Chase continues to support the Hurricanes as a member of Canes 360 and as one of GSW’s most dedicated volunteers. She currently serves as board chair for the GSW Foundation, is a long-time member of the Alumni Association, teaches as a part-time faculty member in the GSW’s College of Education and is an Americus City Council member.

The Alumni Awards Dinner will be held Saturday, Mar. 13 with a reception starting at 6 p.m. and dinner at 7 p.m. Tickets are available at $50 per person and can be purchased by calling the GSW Alumni Association at 229-928-1373, emailing alumni@gsw.edu, or visiting gsw.edu/alumnievents. Reservations required, deadline extended until Monday, March 8 at 12 p.m.