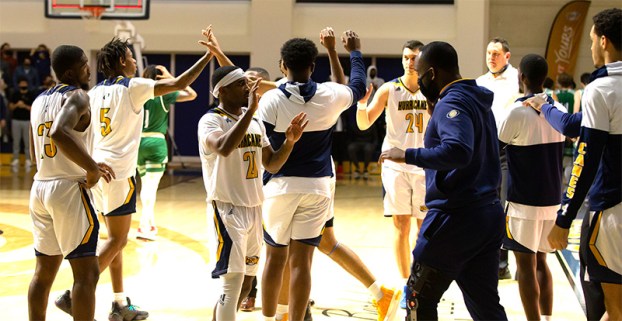 The GSW men’s basketball team is on its way to the Peach Belt Conference Championship Game after defeating Georgia College 75-56 in the PBC semifinals on Thursday, March 4, at GC in Milledgeville, GA. Photo by Christopher Finn

MILLEDGEVILLE – Four of the five starters for the #3 seeded Georgia Southwestern State University (GSW) men’s basketball team scored in double-digits as the Hurricanes cruised to a 75-56 semifinal win in the Peach Belt Conference Tournament over Georgia College Thursday night, March 4, in Milledgeville, GA.

In their fifth PBC Tournament appearance since GSW joined the NCAA, the Hurricanes controlled the entire game. This was the third meeting of the season between both teams as GSW came up on top.

While exchanging scores, a layup by Tatum with 6:37 left in the first half gave GSW their its first double-digit lead of the game at 22-11. However, the Bobcats responded by going on a 12-4 run and trimmed the Hurricanes’ lead to three points with 4:20 remaining in the half. Whitley’s last three-pointer of the game came at the right time, as it gave GSW some breathing room. It also sparked a short 7-0 run right into halftime that saw the Hurricanes take a 33-23 lead at the half.

A three-point play by Tatum started off the second half for GSW as it expanded the Hurricanes’ lead. However, GC never settled. The Bobcats responded with a 7-0 of their own run that saw them cut their deficit to 36-30 just three minutes into the final half. Devon Higgs responded with a layup that sparked a 16-1 run for the Hurricanes as they took a 52-31with 11:34 left in the game.

The Hurricanes dominated and controlled the remaining half of the game while keeping their double-digit lead. With 4:01 remaining, GSW took a commanding 27-point lead at 73-46. The Bobcats continued to score as time ran down, but it was too little, too late as GSW went on to win 75-56.

GC was led in scoring by Luke Chism, who finished with 10 points. Chapin Reirson and Wesley Simpson both added nine points for the Bobcats.

The Hurricanes will play the No. 10 ranked Saints of Flagler College in the PBC Championship game on Sunday, March 7, at the FC gymnasium in St. Augustine, FL. Tipoff is at 4 p.m. The winner of Sunday’s PBC Championship game will receive the league’s automatic bid to the NCAA Tournament. GSW is ranked #6 in the poll but should move up following the win over GC. Flagler is ranked #1 in the region.