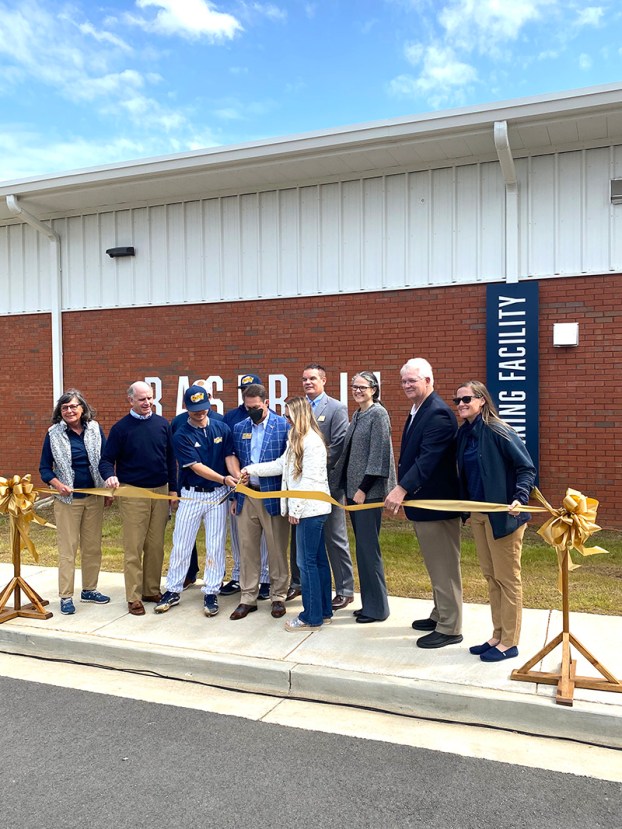 AMERICUS – On Saturday morning, March 6, well over 100 people, including former GSW baseball student-athletes, gathered on the campus of Georgia Southwestern State University (GSW) for the official ribbon cutting and grand opening of the new GSW baseball/softball indoor training facility. This indoor facility is equipped with baseball and softball batting cages, weight training equipment and will eventually be equipped with lockers for the baseball players, as well as showers.

Just two years ago, GSW broke ground on this facility, but on Saturday, March 6, the dream of having an indoor training facility for GSW baseball and softball players officially became a reality.

GSW President Neal Weaver, Ph.D, began his address to the crowd by stating that it is a great day to celebrate another accomplishment and another new facility at GSW.

“Anytime you do a project like this, there’s a lot of people to recognize and to thank,” said Dr. Weaver. “So I certainly want to do some of that this morning.”

Dr. Weaver went on to thank instrumental individuals, such as Sam Hunter, who started the Canes 360 Program, as well as Americus City Council Member Lou Chase, who was a former GSW softball standout and was recently inducted into the GSW Hall of Fame. Chase is also President of the GSW Foundation. “As a group, the foundation has been committed to investing in this university and making sure that our students have the very best facilities and the very best opportunity to be successful,” said Dr. Weaver. Weaver went to thank John and Sharon Sanders, whose daughter played softball at GSW. “One of the first things I heard when I got here four years ago was, ‘We need to make this happen’, said Dr. Weaver. “They’ve been instrumental in guiding us and working with us to make sure that this has happened.” Weaver went on to thank Dr. Lou Ricardi and his wife Alex for their investment in the facility, as well as companies such as Whitefield Signs and CGM Construction and architect Sonya Spalinger. Weaver also thanked GSW Head Baseball Coach Josh McDonald and Head Softball Coach Nicole Levering for their help in making sure the facility has everything that it needs.

Dr. Weaver went on to say that GSW is an educational institution and that one of the things the new training facility will do is teach the student-athletes the importance and necessity of putting in the preparation in order to be successful.

“This building is not just a baseball and softball building. This is a building that teaches our students that in order to be successful, you have to put in the work,” said Weaver. “A lawyer doesn’t go into the courtroom and win her case because she just walked in and did it. She had to prepare ahead of time to be successful. A teacher doesn’t go into a classroom and have a great class simply because he’s a great teacher. If he doesn’t put in the work to prepare himself for his career and his profession, he can’t be successful,” Weaver continue

This is the new GSW indoor hitting facility to be used by the GSW baseball and softball teams. The facility was officially opened at a ribbon cutting ceremony on Saturday, March 6.
Photo by Ken Gustafson

Weaver went on to say that the student-athletes who will use the facility realize that it’s the work that is put in ahead of time that will make them successful at what they want to be good at. “It’s a teaching building,” said Weaver.

GSW Athletic Director Mike Leeder began his remarks by saying that he is extremely proud to be a part of the ribbon cutting ceremony, especially given that so many GSW baseball alums spanning 50 years were there so see it for themselves.

Leeder went on to say that four years ago, he met with John and Sharon Sanders in the athletic conference room before a softball doubleheader against Fort Valley State. “Sharon asked why we couldn’t have an indoor hitting facility for baseball and softball,” said Leeder. “I really didn’t know the answer to that, so together, we kinda figured it out and the impressive part about the Sanders’ commitment was their daughter was never going to get a chance to use the facility, but that didn’t stop their dedication to help make sure that it came to life today.” Leeder went on to say that the facility could not have been done without the funding of Sam Hunter and the Canes 360 Program, which will allow the university to pay off the project so that it can move on to other projects. He also echoed Dr. Weaver’s appreciation and thankfulness for the help of the GSW Foundation for its role in making the indoor facility a reality. Leeder added that the quality of the facility greatly exceeded the expectations of himself and the administration, which were already extremely high. 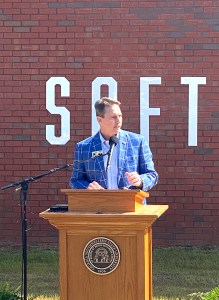 Leeder went on to emphasize the important thing in being successful at college athletics is recruiting. “You have to be able to sustain and feed the beast in recruiting,” said Leeder. “In order to do that, you have to be able to provide a world class experience, not just athletically, but academically as well. This facility today speaks to every single softball and baseball recruit that comes on campus about the type of experience that we want to provide. We want to do that trying to get them in the door and once we get them to be a apart of our family, we are going to maximize to the best of our ability the talent that they have in either baseball or softball,” Leeder continued.

Leeder added that the facility will also be beneficial to the city of Americus in that the university can host travel ball teams and hold individual lessons in the facility so that young boys and girls who aspire to be great baseball and softball players can come on campus and consider GSW as a possible place to play college baseball or softball one day. “Whether they matriculate as student-athletes, or just come as students, GSW is on their mid from a very, very early age,” said Leeder. 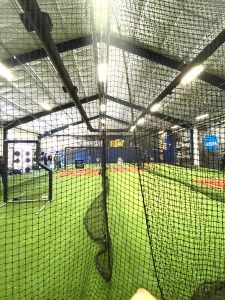 This is the inside of the new GSW indoor baseball and softball hitting facility.
Photo by Ken Gustafson

Americus Mayor Barry Blount, a GSW alum and a former baseball player a the university, gave a special welcome to all of the former GSW baseball players in attendance and recalled the ground breaking on the facility that took place two years ago. Blount also talked about the importance of having a vision, a plan, a budget and, most importantly, capital to make the project happen.

“We had the vision. We had the plan and the budget and the GSW Foundation provided the capital to build this facility,” said Blount. He also mentioned that his son-in-law, Justin McDonald, who is the head baseball coach at Wayne County High School, told a radio announcer that, while a game may be postponed due to bad weather, it wouldn’t affect practice because they have an indoor hitting facility. “Today, we’re here to cut the ribbon on a hitting facility so that his twin brother, Josh (McDonald), can say the same thing,” said Blount. “He has a hitting facility here and they won’t ever have to worry about not having practice because of rain. I know this is going to help the baseball and softball programs become more successful and in turn, it will make Americus a better place for our community.” 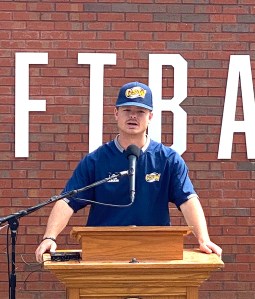 GSW senior catcher Jacob Harrell thanked everyone that was involved in the building of the new GSW indoor hitting facility.
Photo by Ken Gustafson

Lou Chase, President of the GSW Foundation and a former standout softball player at GSW, began her remarks by saying that, in the words of Mike Leeder, “It’s a great day to be a Georgia Southwestern State Hurricane.” Chase also stated that she stood on the exact same spot where the groundbreaking for the facility took place on March 2, 2019, with shovels in hands and hard hats on heads. “Today, we come together two years later to recognize the completion of this hitting facility,” said Chase. “On behalf of the foundation, once again, our financial commitment to this university becomes a reality, whether it’s in the form of supporting the construction of a new building, renovating old ones, rewarding scholarships or initiating programs, the foundation is committed to we will continue to pledge our dollars and support to the students and faculty of this great university.” 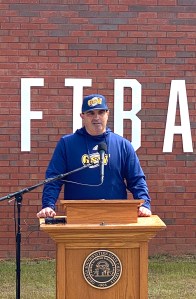 GSW Head Baseball Coach Josh McDonald makes his remarks on the new indoor hitting facility. After thanking all of those involved in its construction, McDonald talked about how this facility will impact recruits as far as choosing to come play ball at GSW, as well as how it will help in their development as athletes.
Photo by Ken Gustafson

GSW Head Softball Coach Nicole Levering thanked Dr. Weaver, Mike Leeder and both the Sanders and Ricardi families for their contributions to making the building of the hitting facility a reality. “I’ve been telling the girls each day, “there’s no reason why we can’t get better today because we have this facility that we can access whenever we like’. So first off, I just want to let you know that this is an excellent resource for us and we appreciate everyone that has brought the support needed to get this done,” said Levering. She went on to say that no other college in the Peach Belt Conference has an indoor hitting facility. 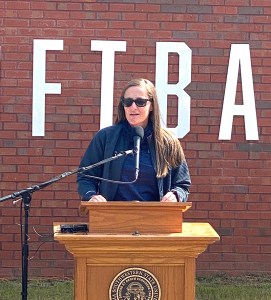 GSW Head Softball coach Nicole Levering told the crowd gathered at the ribbon cutting that her team would no longer have an excuse not to get better every day now that the team has an indoor hitting facility.
Photo by Ken Gustafson

GSW Baseball Coach Josh McDonald stated that one of the things that he talks to recruits about is their development as an athlete. “When you have a facility like that, at the end of the day, development should happen so when they leave out of here, one, they’ll be a better player and they’ll be a better person because of the experience they had here,” said McDonald.

GSW softball player Bailey Christian stated that one of the things she likes most about the facility is that it is opened 24/7 for the student-athletes to use and GSW baseball player Jacob Harold stated that he is really excited to see where GSW athletics is going as a whole and that the indoor hitting facility is a great resource to have. 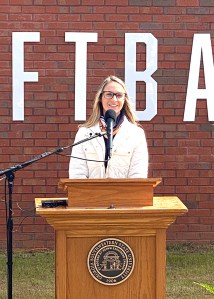 GSW freshman outfielder Bailey Christian told the crowd gathered for the ribbon cutting of the new indoor hitting facility that the best thing she likes about it is that it can be used at anytime, 24/7.
Photo by Ken Gustafson

Stephen Snyder, AVP Executive Director for GSW, is a former Hurricane baseball player. He told the Americus Times-Recorder that as a former player and a current employee of the university, it means a lot to him to have the facility because recruits can now have a perception of the level of commitment that the school is willing to make towards excellence in athletics and in other things at GSW. “It gives them a level of perception just to know that good things are happening at this university,” said Snyder. “We’ve got a lot of alums who had great experiences at Georgia Southwestern and we had some good teams here that didn’t have these facilities. Having these facilities now certainly puts us at another level. Again, the perception of recruits is that good things are happening here and that they take athletics seriously. It’s certainly a good look for the university and a good look for the baseball program,” Snyder continued.