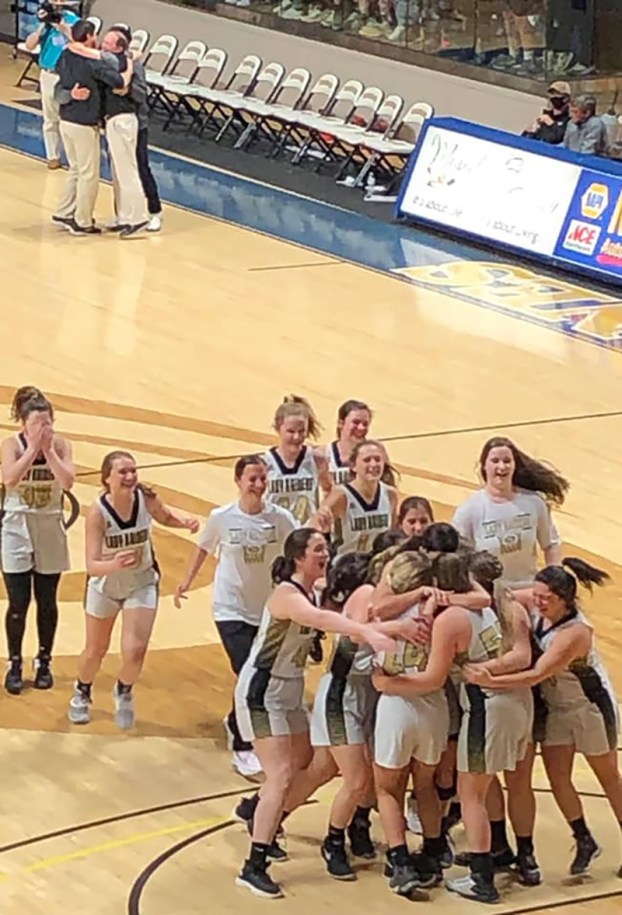 The 2020-21 Southland Academy Lady Raiders celebrate on the floor after winning the school’s first GISA state championship in girls’ basketball since 1986 by beating Westfield in the GISA Class AAA State Championship Game. Photo by Will Esterlin

AMERICUS – Al Davis, the former owner of the NFL’s Oakland Raiders (now the Las Vegas Raiders), once had a saying that said it all about what he wanted his club to be about: “Just win baby! Win!!” Those Raiders won their share of Super Bowls, but on Saturday, March 6, another group of Raiders followed through with that mantra. For the first time since 1986, the Southland Lady Raider Basketball Team (SAR) claimed the Georgia Independent School Association (GISA) Class AAA State Championship with a hard-fought 29-22 victory over Westfield.

This is the second state championship for Southland Academy in any sport in the last five years (2016 boys’ swimming), but it has been 35 years since the Lady Raiders last hoisted a state championship trophy in girls’ basketball.

In NFL circles, it has also been said that, ‘Defense wins championships’. On this March night, the Lady Raiders lived by that credo as well. All year long, the Lady Raiders won games by using their strong, tenacious defense to create their offense. While Saturday’s championship game was an extremely low-scoring game, the defense of SAR came through once again and when it mattered most. 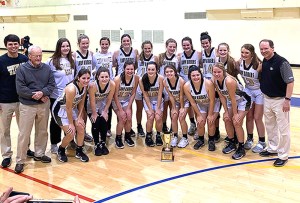 The Southland Academy Lady Raiders pose for a team picture with their state championship trophy after defeating Westfield in the GISA Class AAA State Championship Game.
Photo by Will Esterlin

“We just always talk about keep climbing the mountain. Every mountain has some peaks and valleys in it,” said SAR Head Coach Ty Kinslow. “I told the girls to just keep hanging on and we hang on with our defense. That’s the only reason we only gave up over 40 one time this year. It is unbelievable! It feels so good for these girls. They’ve worked so hard and they play together as a team of unity. They stick together through thick and thin no matter whose got what role. Everybody is committed to our team.”

The only time this season the Lady Raiders gave up more than 40 points this year was on Tuesday, January 2, when the Ldy Raiders defeated Westwood 51-43. 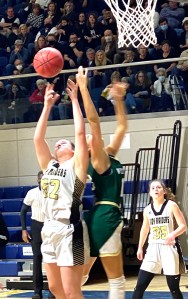 Southland Academy senior Haleigh Warren (14) scored nine points to lead the Lady Raiders to victory over Westfield in the state title game. Included in those nine points was a key three-pointer with six minutes left in the game. From that point on, SAR never lost the lead.
Photo by Ken Gustafson

SAR senior guard Haleigh Warren led the Lady Raiders in scoring with nine points, but perhaps the most important points of the game came from Warren’s three-pointer with six minutes left to give the Lady Raiders a 21-18 lead. From that point on, SAR would never relinquish the lead.

Senior forward Holly McCain, who made a huge steal in the semifinal game against John Milledge Academy two nights before, came up big again when it mattered most.

She scored a total of eight points in the game, but six of them came on two three-pointers. Sophomore point guard Riley Mitchell, who has been a key main stay for SAR all year long, had seven points and senior Maddie Crisp scored four. 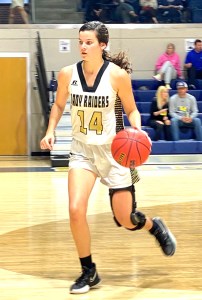 Southland Academy senior Haleigh Warren (14) scored nine points to lead the Lady Raiders to victory over Westfield in the state title game. Included in those nine points was a key three-pointer with six minutes left in the game. From that point on, SAR never lost the lead.
Photo by Ken Gustafson

Both teams struggled to score in the first quarter. In fact, the Lady Raiders did not get on the scoreboard until close to the 2:35 mark when Crips drove in and scored on a layup. Fortunately for SAR, the Lady Hornets were struggling on offense as well and only led 4-3 after one quarter of play. 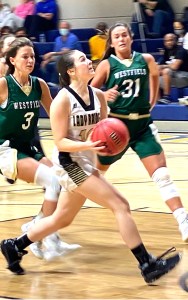 McCain was able to give SAR its first lead of the game on a three-pointer to open the second quarter. Then Mitchell struck for a three-pointer with less than five minutes remaining in the half to give the Lady Raiders a 9-4 lead. This turn of events ignited SAR as the Lady Raiders were able to force some turnovers. Seeing this shift in momentum, Westfield Head Coach Mason Nelson called a timeout with 4:15 left in the half.

However, as the half continued, neither team was able to score at a high clip. Both teams were very tentative on offense and both squads seemed content to work the ball around the perimeter in a very slow and methodical manner in order to find the high percentage shot. Both teams were also playing excellent defense, which limited opportunities on offense. As a result, the first half was an extremely low-scoring half with the Lady Raiders leading 9-7. 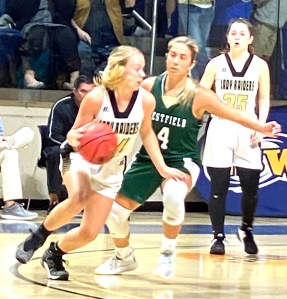 However, things changed quickly early in the third quarter as the Lady Hornets went to work right away. They scored four unanswered points to take an 11-9 lead, prompting Kinslow to call a timeout after just one minute of play. Out of the timeout, Sadie Hayes extended the Westfield lead to four with a basket, but the Lady Raiders answered as McCain drilled a three-pointer. Her shot from behind the arc seemed to jump start SAR as the Lady Raiders began to force turnovers and reeled off four more points to take a 16-13 lead by the end of the third quarter.

The tempo of the game continued to be slow and methodical as both teams stepped it up on the defensive end and continued to limit each other’s chances to score. As for SAR, the Lady Raiders continued to be patient on offense, working for the high percentage shot.

About 40 seconds into the fourth quarter, Crisp scored to give SAR an 18-13 lead, but Emma Williams responded with a basket for Westfield and was fouled. Williams sank the free throw to complete the three-point play, bringing the Lady Hornets to within two at 18-16. Then with a little more than six minutes left in the game, Hayes tied the score with a basket, but Haleigh Warren responded with a three-pointer for SAR that ignited the largely pro-SAR crowd in the Storm Dome. 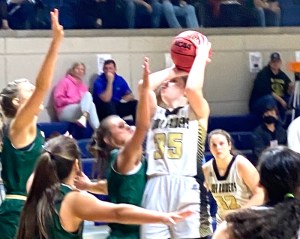 That three-pointer by Warren proved to a crucial turning point in the game. From that point on, the Lady Raiders never relinquished their lead. Then at the 4:16 mark, Warrant struck again with a layup to give SAR a five-point lead.

However, the Lady Hornets would respond. Avery Adams was able to score with 2:34 left and Hayes followed up with a basket to bring Westfield to within one at 23-22.

During this period of the game, the Lady Raiders were struggling offensively and were committing turnovers, but McCain was able to find Warren on the inside for a layup to give SAR a 25-22 lead. The Lady Raiders were a little over a minute away from their first state championship in girls’ basketball since 1986.

With 1:16 to go, the Lady Hornets tried to trap SAR at half court and nearly forced a turnover, but with 44.8 seconds to go, Morgan Weaver was fouled and made one of two foul shots, giving SAR a 26-22 lead. On the Lady Hornets’ next possession, they turned it over on a double dribble, giving SAR the ball back with 46 seconds left.

With 34.7 seconds left in the game, Mitchell had a chance to extend the SAR lead, but missed the front end of a one and one. Mitchell would later miss another free throw on a one and one, but SAR got the stop it needed on defense. In the closing seconds, McCain was fouled and sank the last two free throws of the game to salt away the state championship for the Lady Raiders.

For five SAR seniors: Maddie Crisp, Katie Rogers, Reese Roland, Haleigh Warren and Holly McCain, their high school basketball careers are over, but they will go out on top as state champions.