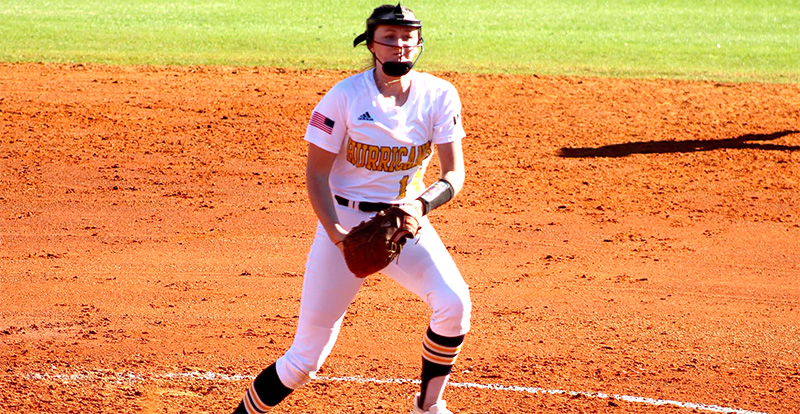 FRANKLIN SPRINGS, GA – The Georgia Southwestern State University women’s softball team split a pair of games on Sunday, March 7, by scores of 1-2 and 3-8 during a weekend doubleheader against Emmanuel College (EC) in Franklin Springs, GA.

In Game 1, it was a pitchers battle between the two teams for the first five innings as both teams went scoreless. However, everything changed in the bottom of the fifth inning when Emmanuel started off the inning with a home run into left field for a 1-0 lead. After back-to-back singles by the Lady Lions, EC added another run on an RBI double, making the score 2-0 in favor of the Lady Lions.

However, the Lady Hurricanes would have a response. In the bottom of the seventh inning with two outs, Katelyn Wood hit a home run over the centerfield wall to cut the lead in half. Unfortunately for GSW, Hailey Pinette grounded out at their next at-bat as the Lady Hurricanes lost Game 1. Gibson and Wood were the only Lady Hurricanes who got a hit during the game.

Game 2 went a little different for GSW (8-3), who started the scoring in the top fifth inning. With two outs, Chloe Sneed drew a walk. Then Haley Griffin belted a two-run home run over the left field wall to give GSW a 2-0 lead. One batter later, Singer doubled into right center and plated Allyson Murdock for a 3-0 lead. The Lady Lions returned the favor in the bottom of the fourth with a two-run home run of their own to cut the score to 3-2.

Kayla Kerr upped the score in the top of the fifth inning with a two-run home run into left field. In the top sixth inning with the bases loaded and one out, Kerr doubled into centerfield, scoring two Lady Hurricanes. Zoe Willis added an insurance run for GSW when she drove in a run on an RBI single and the Lady Hurricanes wen to win Game 2 by the score of 8-3.

The Lady Hurricanes will return home to host Albany State in a midweek doubleheader on Wednesday, March 10.