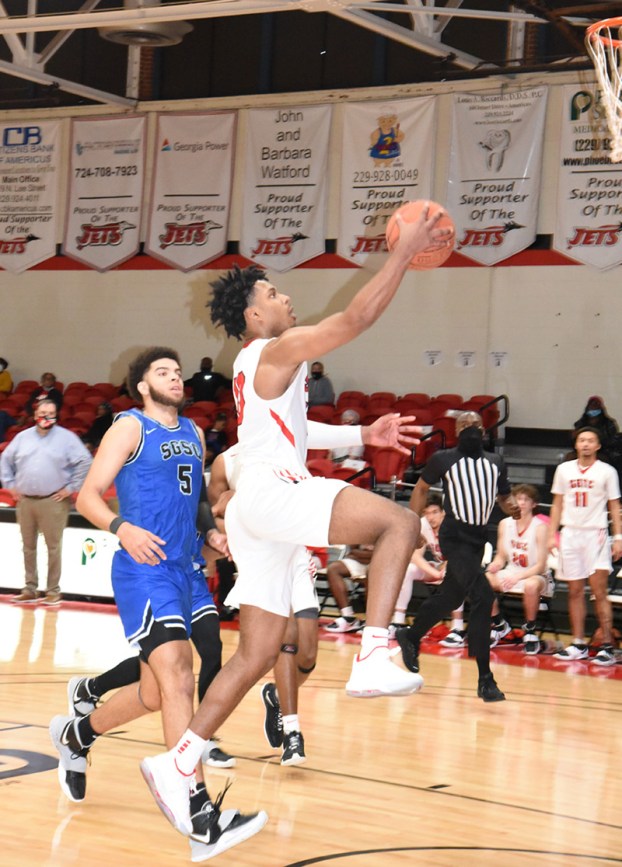 SGTC guard Marvin McGhee had 30 points in the Jets’ win over South Georgia State on Thursday in Waycross. Photo by Su Ann Bird

“I am really proud of our guys,” said South Georgia Technical College Jets interim head coach Chris Ballauer.  “We had a tough loss against Southern Crescent in overtime on Tuesday, but they bounced back and got two big wins on Thursday and Saturday against the nationally ranked South Georgia State Hawks.”

The Jets defeated SGSC 91 – 76 in Waycross, and then followed that up with a second up-set win by the score of 87 – 77 in Americus on Saturday.

In the first game against SGSC on Thursday, March 4, SGTC freshman 6’ 4” guard Marvin McGhee from Atlanta, GA, “really put us on his back and kept us in the game,” said Coach Ballauer.  “We got into foul trouble early. Our bench brought great energy and when their numbers were called, they were ready.”

The Jets and the Hawks were tied at 39 – 39 at the end of the first half.  “Jordan Stephens came out and scored the first 10 points of the second half to really get us going and set the tone for the rest of the game.  Waycross may be the toughest place to play and win in our league.  They just do not lose many games at home, so getting out with a win is always good,” said Ballauer.  The Jets outscored South Georgia State 52 – 39 in the second half. 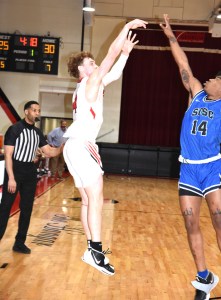 Will Johnston (4) led the Jets in scoring Saturday with 22 points against South Georgia State College.
Photo by Su Ann Bird

In that win, Marvin McGhee was the top scorer with 30 points.  He was 10 of 18 from the floor and seven of 11 from the three-point line.  He also made three of his four free throws.  Jordan Stephens joined McGhee in double-figure scoring with 22 points.  Stephens was four of six from the three-point line and seven of 12 from the floor.  He also made four of four from the foul line.   The only other Jet in double-digits was Will Johnston with 14 points.

Jalen Reynolds ended the night with eight points, Kadeem Wilks added six, Justice Hayes, 4, and then Tabais Long, Dhal Fleg, and Radim Havel each tossed in two points.  Nikola Sasaroga closed out the scoring with one point.  Reynolds led the team in rebounds with 12.

Coach Ballauer knew that it would be very tough to come back two days later and come up with their second straight win, but that is exactly what the Jets did in the Hangar on Saturday. This time, the Jets ended the game with an 87 – 77 victory.

Jordan Stephens had another good night with 18 points and nine rebounds.  Jalen Reynolds had a double-double night with 15 points, 12 rebounds, three assists, two steals and two blocked shots.  Josh Pain came off the bench and hit three of six three-pointers and a layup to earn 14 points and then Tabais Long added 13 points to close out the double-digit scoring for South Georgia Tech.  Marvin McGhee was the only other Jet to score and he had five points.

The Jets will be off this week but will have to play hard to hang on to their first place ranking in the GCAA when they travel to Albany on Tuesday, March 16th for a 7 p.m. match-up.  Albany Tech will come to Americus on Thursday, March 18th for a 7 p.m. rematch.  The Jets and the Lady Jets will both be at home on Saturday, March 20th for sophomore day.  The Lady Jets open at 1 p.m. against East Georgia State and the Jets follow at 4 p.m. for a game with Gordon State College.