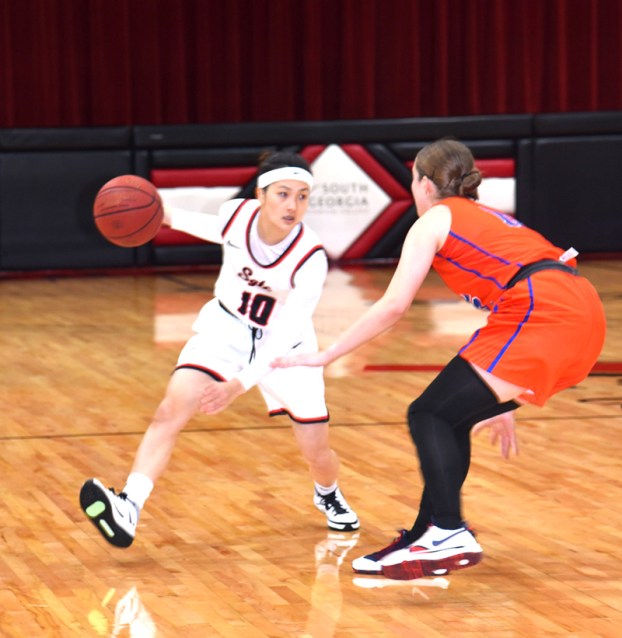 SGTC Lady Jets’ guard Moe Shida scored in double-figures in both of the Lady Jets losses to Georgia Highlands in Rome. Photo by Su Ann Bird

ROME, GA – It was a very tough weekend for the South Georgia Technical College Lady Jets basketball team. SGTC managed to secure an 84 – 82 double over-time win over Georgia Highlands in Americus on Tuesday, but payback followed as the Georgia Highlands Lady Chargers came back and defeated the Lady Jets 78 – 64 on Friday and then 72 – 65 on Saturday.

“On Friday, we started slow and really struggled to find a rhythm,” said SGTC Lady Jets’ head coach James Frey.  “We allowed them to shoot 36 free throws and we shot 18.  We just could not find a rhythm on either end of the floor.  We were not consistent on offense and Georgia Highlands whipped us on the boards.  They wanted the win more.”

And then on Saturday, Georgia Highlands came back and took a 72 – 65 victory over the Lady Jets to take first place in the Georgia Collegiate Athletic Association (GCAA) standings with an 8 – 1 record while South Georgia Tech fell to second place with a 7 – 2 record.  Both teams have three weeks left in the regular season, but the Lady Chargers are currently in the driver’s seat to host the National Junior College Athletic Association Region XVII championship semi-finals and finals in Rome.

The Lady Jets started the week ranked 5th nationally, but after back-to-back losses to the 24th ranked Lady Chargers, SGTC will drop in the rankings.

“Saturday we came out with great intensity and were playing much better,” said Coach Frey.  “But for whatever reason we faced A LOT of adversity starting midway through the first quarter and the game was never the same.  Professionalism on all levels from coaches to officials has to be first-and-foremost in all games especially championship type games.  When professionalism turns into personal agendas, the student athletes suffer and unfortunately, that was the case Saturday.

“I was extremely proud of our young ladies and the incredible effort they gave to overcome a very difficult situation.  It just was not quite enough in the end.  Georgia Highlands has a tremendous team with quality young ladies on and off the floor.  Coach Harrell has done a great job with them.  I think our team will be extremely focused over the next two weeks.  We are excited to finish our regular season strong, and to get to the conference tournament.  That will be our focus starting immediately,” added Frey.

Sophomore guard Moe Shida was the only Lady Jet in double-figures with 16 points.  Flore Ngasamputu came off the bench to score nine points.  Imani McNeal, Maikya Simmons, and Veronica Charles contributed seven points each.  Abby Solway added six, Femme Sikuzani and Hope Butera had four each, Jaidyn Trevino, 3, and Niya McGuire, 1.   Imani McNeal and Femme Sikuzani led the team in rebounds with seven each.  All five of Georgia Highlands’ starters had double-figures.

Then on Saturday, Georgia Highlands went up 17 – 16 at the end of the first quarter. Georgia Highlands scored first in the second quarter and were up 23 – 20 with 6:14 remaining in the half.  A double-technical foul on South Georgia Technical College allowed the Lady Chargers to pull ahead 27 – 20.  The Lady Jets managed to overcome that deficit and close the gap to 33 – 31 at the half.

South Georgia Tech kept plugging ahead in the fourth quarter and pulled within two points several time before a layup by Niya McGuire allowed the Lady Jets to tie the game at 63-63 with less than four minutes remaining.  South Georgia Tech only scored two points in the final three and a half minutes and Georgia Highlands took the 72 – 65 victory.

Veronica Charles and Niya McGuire were the leading scorers for the Lady Jets in that game with 11 points each.  Moe Shida closed out the double-digit scoring with 10 points.  Imani McNeal and Maikya Simmons both added eight points, Femme Sikuzani had seven and Flore Ngasamputu 6.  Hope Butera scored three points and Tena Ikidi closed out the scoring with one point.  Georgia Highlands had three players with double-digits and were led by Jashanti Simmons with 26 points.