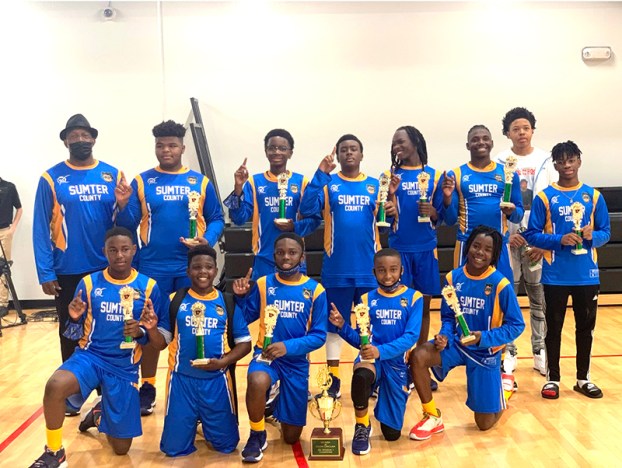 BLUFTON, SC – After demolishing the competition on their way to winning the Georgia Recreation and Parks Association (GRPA) State Championship, The Sumter County Parks and Recreation Department (SCPRD) 11 and 12-Year-Old Boys All-Star Basketball Team traveled to Blufton, South Carolina on Saturday, March 13, for the annual Border War Games featuring Georgia’s best against the best South Carolina had to offer. It was a much tougher challenge, but the SCPRD All-Stars were up to the challenge as they were able to edge out the SC All-Stars 37-35 to win the Border War Championship.

However, one uncanny thing took place in this tournament. The “South Carolina All-Stars” actually weren’t from South Carolina at all. According to SCPRD Head Coach Dwight Harris, the South Carolina All-Stars, who were supposed to compete against the SCPRD All-Stars, decided for some reason not to compete. Therefore, the SCPRD All-Stars had to compete against a team from Henry County, GA instead. Nevertheless, the Sumter County team came to play and was able to beat the team from Henry County 37-35 to win the Border War Championship.

This is the first time ever in the history of Sumter County that one of its all-star basketball teams had won this competition.

“The boys played extremely hard. They have the heart of a champion. Needless to say, this is why they are District Champions, State Champions and now the Border War Champions,” said Harris. “I would like to thank the parents of each of these boys and all of you that donated so graciously. Because of you, all expenses were paid. We hope we made Sumter County proud! God bless you and God bless our Champions,” continued Harris.

Before the Sumter County All-Stars could even compete in the Border War competition, they first had to win the Georgia Recreation and Parks Association State Championship. Having won the GRPA District 3 Tournament two weeks before, the team went up to Chatsworth, GA to compete in the GRPA State Tournament on Friday and Saturday, March 5-6. The Sumter County All-Stars did Americus and Sumter County proud as they were able to bring home another GRPA state title by beating Glynn County 74-37 in the championship game.

From Staff Reports   AMERICUS – After losing 8-0 in its season opener to Lee County, the Americus-Sumter Varsity Boys... read more