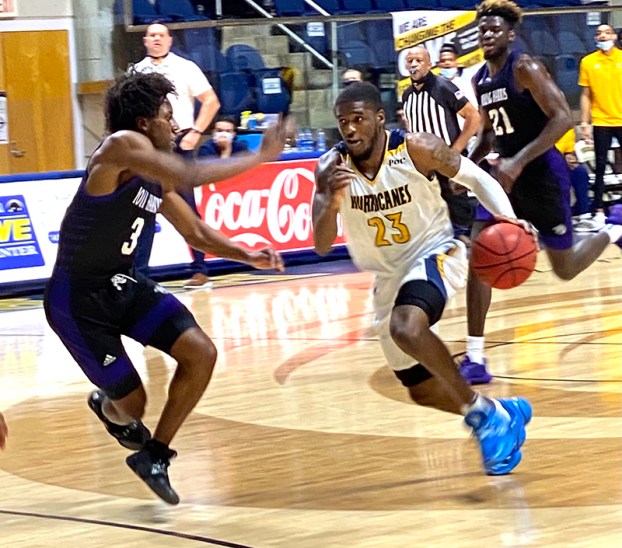 GSW junior guard Donte Tatum (#23) scored 27 points to lead all scorers in the Hurricanes’ 72-69 loss to Lee University in the first round of the NCAA Division II Men’s Basketball Tournament. ATR Archive

VALDOSTA, GA – The sixth-seeded Georgia Southwestern State Hurricanes were in it until the final moments, but could not get their final shots to drop as they fell to third-seeded Lee University 72-69 in the quarterfinal round of the NCAA men’s basketball South Regional on Saturday night, March 13 at Valdosta State University.

With the loss, GSW concludes its season with a record of 13-6 after making its third NCAA Tournament appearance in program history.

Donte Tatum led all scorers with 27 points for the Hurricanes, hitting 10 of 17 shots from the field and seven of nine free throws. Kahlon Whitley added 19 points, hitting four of eight three-pointers, while Devon Higgs led the team with six rebounds.

Jayce Willingham led Lee with 24 points while Beyaun Hendricks added 12. Lee finished with a 35-27 rebounding edge over the Hurricanes, despite being outshot by GSW and committing 19 turnovers.

Lee led by seven with 3:36 to play in the first half 28-21 after a layup from Hendricks, the Flames’ largest lead of the half. GSW responded by outscoring Lee 5-2 for the remainder of the half to trail at the break 30-26.

Neither team would lead by more than three for the next eight minutes. With the score tied at 60, the Flames scored seven straight as Quay Kennedy hit a pair of free throws, followed by a layup from Makhi Mcguire and then a three from Mcguire.

Whitley hit a three-pointer for GSW to bring the lead back to four, but two Willingham free throws put it back to six with 1:29 to play. The two teams traded free throws and Lee still led by six when Baris Ulker hit a three for GSW with 38 seconds left. That was followed by a Tatum layup that made the score 70-69 with 19 seconds left.

Lee made one of two free throws on the ensuing possession, giving the Hurricanes the ball with 13 seconds left and down two. GSW had two chances in the final seconds as they attacked the rim. However, the Flames’ interior defense prevented the shots from falling and Lee escaped with a 72-69 victory.

GSW shot 54% in the game and 46% from long range, while Lee was held to 43% shooting. Information for this article was obtained from the Peach Belt Conference.

Ledger strikes out 10 in Raiders’ win over Trinity Christian