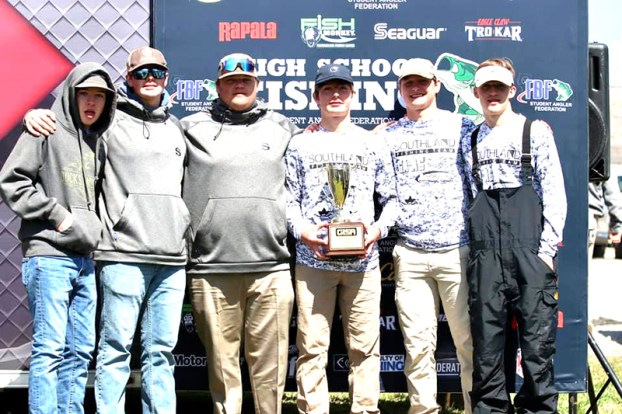 EATONTON, GA – The Southland Academy fishing team (SAR) went up to Lake Oconee on Saturday, March 20, to compete in the Georgia Independent School Association (GISA) State Fishing Championships and was able to reel in the state championship itself. To qualify to compete at state, each boat, consisting of two fishermen and a boat captain, must have placed in the top 25 at designated qualifying fishing competitions throughout the fishing season. All three of the Raiders’ boats not only qualified, but won each of the competitions in which they entered.

Launch time for Saturday’s state tournament was 7:00 am., but the weather was less than ideal for fishing conditions. It was a damp and cold morning with strong winds. However, the weather was a challenge that the Raiders would accept and would eventually conquer.

Weigh-in began at 2:00 pm with a large number of boats returning without any fish from the blustery day. However, the Raiders’ perseverance and determination were apparent due to the fact that all three SAR boats returned with fish for the weigh-in.

The individual SAR team of James Griffin and Eli Griffin also walked away with top accolades for turning in the most weight of any other individual team for the day. This accomplishment qualifies them to compete at the national competition. This individual team also took second place for the “Big Fish” for the tournament.

According to Sherri Bass, mother of SAR fisherman Collins Bass, Southland Academy’s charter fishing team has established itself and dominated the GISA fishing circuit this year. “We are proud of their hard work and dedication and look forward to the future of this sport at Southland,” said Bass. “Coach Stephanie Chapman has done an amazing job with bringing new sporting opportunities to Southland Academy with much success.”

For those who would like more information on Southland Academy’s fishing team, they can contact Coach Stephanie Chapman or SAR Athletic Director Clint Humphrey for more information.