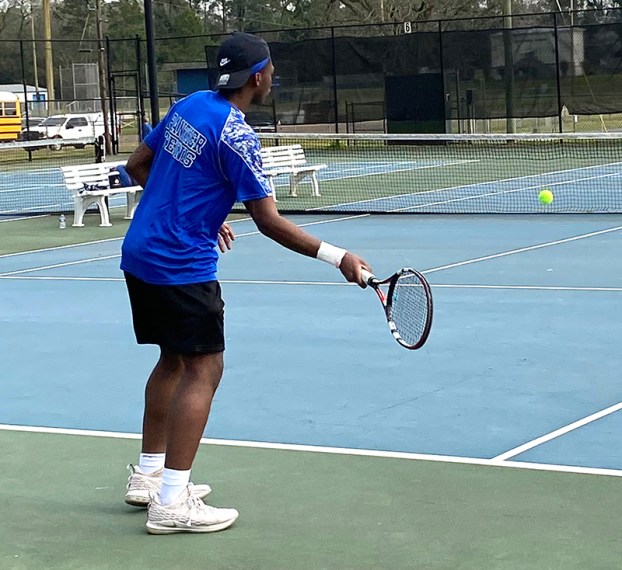 AMERICUS – It was a bittersweet week for the Americus-Sumter Varsity Boys’ and Girls’ tennis teams. On Tuesday, March 16, both squads fell to the Cougars and Lady Cougars 4-1 and 5-0, but both teams were able to rebound three days later by defeating the Trojans and Lady Trojans of Peach County 5-0 and 4-1.

On the boys’ side, the ASHS doubles team of James Schopen Davis and James Ndaayezwi earned a win against the Cougars’ duo of Dalton Yarbrough and Jackson Adams 6-4, 6-4, but that would be the only win for the Panthers on this day. In the other doubles match, the ASHS duo of Corey Wright and Cam Evans fell in straight sets to Heer Raste and Dallas Howell in straight sets 1-6, 2-6.

In boys’ singles action, the Panthers struggled against their rivals from across the Flint. ASHS #1 player Zach Johnson fell in straight sets to Dayshawn Collins 3-6, 0-6.

Keldrick Flemming could not fair much better in his match as he lost in straight sets to J.C. Bartell 0-6, 2-6. The Panthers’ #3 player, Jeremy Bembrey, faired a little better against Javan Hartaman, but still lost in straight sets 4-6, 0-6. It was a day in which CCHS was in total domination in both girls and boys tennis.

However, both the Panthers and Lady Panthers had a couple of days to recover before they went back at it again against Peach County in their region matches and things turned out much differently. Pepito lost the opening girls’ match to Emma Robinson, but put up a great fight, especially in the second set. She lost the first set 2-6, but won the second set 7-5. Unfortunately for Pepito, she was not able to win the deciding third set as she was beaten 1-6.

The ASHS girls’ #2 player, Rebeccah Ingle, had a much better showing against the Trojans. Ingle was able to defeat Jannet Tejada in straight sets 6-1, 6-2 to tie the team match at 1-1. Then Alecia Holmes followed up with another win as she defeated Brooklyn Heber in straight sets 6-0, 6-1. That gave the Lady Panthers a 2-1 advantage and they only needed one doubles match victory to ensure a team win.

Thanks to the play of the ASHS duo of Trinity Gilliam and Melanie Wooden, the ASHS Lady Panthers were able to secure the team victory. The team of Gilliam/Wooden defeated the PCHS duo of Stephanie Barajas/Monsa Tejada in straight sets 6-3, 6-3.

With three match wins under their belt, the Lady Panthers were assured of a team victory, but the ASHS doubles team of Paris Eberhardt/Dionesia Westbrook-Myrie would not be satisfied, as they were seeking a win of their own. They were able to secure that win by defeating the PCHS team of Dianna Ochoa/Mackenzie Toftee in straight sets 6-3, 6-3. With that final result, the Lady Panthers had defeated PCHS 4-1.

In boys’ action, the Panthers were able to get off to a great start to their team match as when Zach Johnson defeated Ralston Lester in straight sets 6-0, 6-0. Keldrick Flemming had a more difficult time against his opponent, Timothy Deas, but was able to win his match 4-6, 6-0, 6-1 to give the Panthers a 2-0 advantage.

Jeremy Bembrey was able to win his match via forfeit, which ensured a team win for the Panthers.

Both the Panthers and Lady Panthers will travel up to Forstyh, GA to take on Mary Persons on Tuesday, March 23, at 4:30 p.m.

While March can be fickle—pollen, sinus headaches and aggravating winds that seem never to abate—it is a month when the... read more