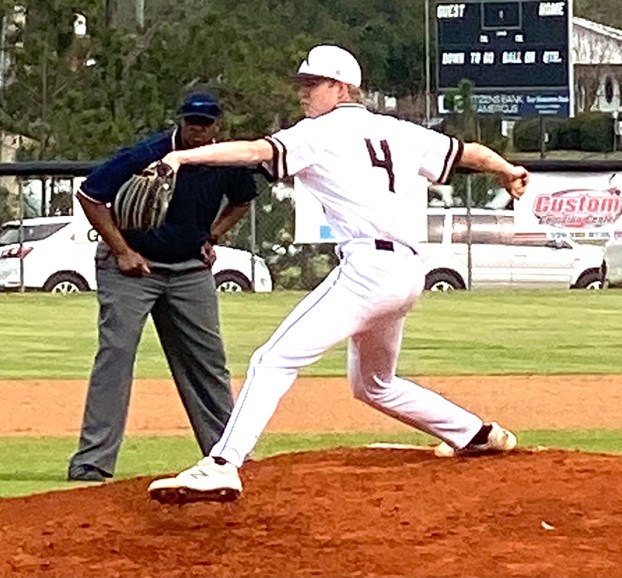 Southland Academy sophomore pitcher Henry Johnson gave up three runs on five hits, but struck out nine batters in four innings of work in the Raiders’ 3-2 defeat at the hands of Brookwood. Photo by Ken Gustafson

AMERICUS – The Southland Academy Raider Baseball Team (SAR) fell behind early 3-0 against the Warriors of Brookwood (BKW), but thanks to James Griffin’s two-run single in the bottom of the sixth, the Raiders were able to give themselves a chance for a come-from-behind victory. However, their bid for a comeback fell short in the bottom of the seventh. With one out, Will Godwin was able to reach on an error, but BKW starting pitcher Harper McLendon was able to complete a dominating performance by retiring Nathan Duke and Henry Johnson to secure a 3-2 victory for the Warriors on Tuesday, March 23, at the Southland Academy baseball complex.

“That was probably the best pitcher we’ve seen all year,” said SAR Head Coach John Brady. “Big hits are hard to come by against guys like that. He (McLendon) was throwing in the upper 80s and might have touched 90 a few times. He had a good breaking pitch. It’s not easy against guys like that. I thought overall, we did a good job at the plate. We only stuck out six times, I think. We put the ball in play, but not with a lot of luck sometimes,” Brady continued.

McLenndon pitched the entire game for the Warriors and gave up two runs on three hits. He walked only to batters and struck out six.

McLendon got the run support that he needed in the top of the second inning when the Warriors scored three runs on three hits. They also took advantage of a walk and an error in that inning. 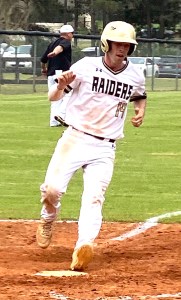 Fortunately for the Raiders, their pitching was able to hold the Warriors for the remainder of the afternoon. Henry Johnson, who started on the mound for SAR, pitched three scoreless innings after giving up the three runs in the second. In total, Johnson gave up three runs on five hits, but only one of those runs was earned. He walked only two batters and struck out nine. 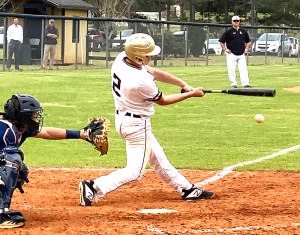 Southland Academy center fielder James Griffin drove in two runs on an RBI single in the bottom of the sixth inning to bring the Raiders to within one run of Brookwood.
Photo by Ken Gustafson

Perry Usher came on in relief of Johnson in the fourth and continued to keep the Raiders within striking distance. He pitched three scoreless innings, giving up only one hit, walking one and striking out two.

“Our pitching was awesome today from these young guys (Johnson and Usher),” said Brady. “A freshman and a sophomore throwing today, they just did awesome. They kept us right there with a chance to win. They threw a lot of strikes and did exactly what we needed and I’m proud of those guys.”

The Warriors started their three-run barrage in the second with a single from Jacob Lauderdale. Johnson responded by striking out Collin Clark, but Lauderdale was able to advance to second on a wild pitch. Johnson kept his poise by striking out Jackson Vaughn for the second out of the frame, but Parker Lee was able to deliver an RBI single to give the Warriors a 1-0 lead. Lee then advanced to second on a passed ball, which put another BKW runner in scoring position. Christopher May then singled to left field, allowing Lee to advance to third with two outs. Zach Counts then reached on an error, allowing Lee to score. The Warriors would eventually get their third and final run of the game when May scored on another passed ball. 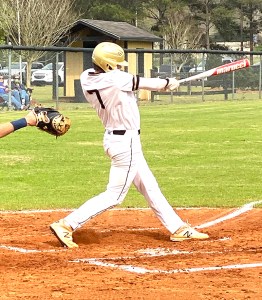 Southland Academy shortstop Owen Exley went 1 for 3 with a single in the Raiders’ 3-2 loss to Brookwood.
Photo by Ken Gustafson

The Raiders were not able to score any runs and give themselves a chance for a come-from-behind victory until the bottom of the sixth inning. Both Nathan Duke and Henry Johnson were able to reach on errors, putting runners on first and second with nobody out. Chase Ledger then singled to left field to load the bases with no outs for Owen Exley. Exley hit an infield pop fly for the first out, but James Griffin was able to come through with a two-run single to left field. The Raiders were back in the game with a chance to tie or win it with only one out.

However, McLendon struck out Buddy Brady and got Perry Usher to ground into a fielder’s choice to end the game.

Hits were hard to come by in this game for the Raiders. They had a total of three hits; Exley, Ledger and the two-run single by Griffin. SAR committed one error on the day.

With the loss, the Raiders drop to 3-3 on the season, while the Warriors improve to 7-3.

Both teams will go at it again down in Thomasville on Thursday, March 25, at 6 p.m.

AMERICUS – After giving up an early goal from Crisp County’s Yash Barot less than a minute into the match,... read more