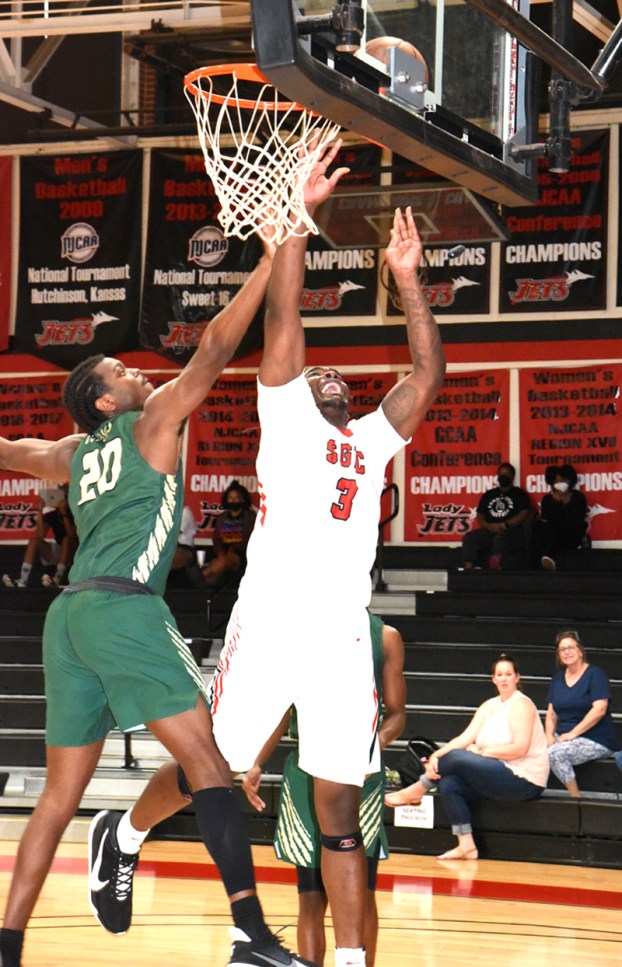 AMERICUS – The South Georgia Technical College (SGTC) Jets outscored East Georgia State College 5 – 0 in the last minute to secure a 71 – 66 victory in their final regular season game.  The Jets finished the regular season in third place in the Georgia Collegiate Athletic Association (GCAA) with an 11 – 5 record and are 13 – 9 overall.

As a result, the Jets earned the right to host a quarterfinal round of the NJCAA Region 17 tournament on Tuesday, April 6 at 6 p.m.   As the third-place seed, SGTC will host the #6 seed, which will be either Southern Crescent or Central Georgia Technical College depending on how the make-up games this week turn out.

SGTC interim head coach Chris Ballauer was pleased with his team’s victory.  “It was a great team win,” said Ballauer.  “We found a way to win when our three-point field goals were not falling.  This group is special and I really think our best basketball is ahead of us.  There are two games on Tuesday that have some impact on who we play, but as it stands now we will host Southern Crescent on April 6 at 6 p.m. in the first game of the tournament.”

The Jets struggled again with three-point shooting against East Georgia (EGC).  At the end of the first half, the Jets had only made one of 12 three-point attempts for an 8.33% success rate.  Fortunately, EGC only hit one of six or 16.7% of their three-point shots.  By the end of the game, SGTC had improved to 20% from the three-point line hitting a total of four of 20.  EGC climbed to 26.7% with four of 15.

SGTC sophomore forward Jalen Reynolds led the Jets in scoring with a total of 24 points.  He had 12 points in the first half and 12 in the second half.   He made three of the Jets five points in the final minute of play to help elevate SGTC to the victory.

Reynolds had 12 rebounds, two blocks, and a steal to go along with his 24 points for a double-double performance on the court.  Freshman guard Marvin McGhee was the only other Jet in double figures.  He had 11 points, eight rebounds, six assists, and four steals.

Matija Milivojevic, a freshman from Belgrade, Serbia, came off the bench to contribute nine points for the Jets.  He also had four rebounds, one assist, and one steal.  Sophomore guard Jordan Stephens tossed in seven points for the Jets, while Tabais Long and Will Johnston each came away with six points on the night.  Nikola Sasaroga had four points and Justice Hays and Keundre Campbell both contributed two points to round out the SGTC scoring.

EGC scored first in the contest and had a nine-point lead late in the first half.  SGTC was able to cut that deficit to 39 – 33 at the end of the first half.  EGC maintained a lead for the first seven minutes of the second half, but the Jets tied the game at 46 – 46 with 12:56 remaining in the game.

The two teams had seven lead changes and six ties in that tight contest.  With 1:49 remaining in the game, Long hit two free throws to tie the game at 64 – 64.  Jalen Reynolds scored two points with 1:27 remaining to put the Jets up 66 – 64.  EGC rallied to tie the game at 66 – 66 with 59 seconds left in the contest, but Reynolds made the Jets’ next three points the old-fashioned way and then Marvin McGhee hit two free throws with 9.2 seconds to propel the Jets to the 71 – 66 victory.

The Jets are off this week.  Their next action will be on Tuesday, April 6 at 6 p.m. when they host the Region 17 quarterfinal contest.  The winner of that game will advance to the Region 17 semi-finals, which will most likely be held at either Georgia Highlands (GHC) in Rome or South Georgia State College (SGSC) in Waycross.  GHC is currently in first place with a 13 – 2 GCAA record and SGSC is 12 – 3.  Both are scheduled to play make-up games on Tuesday, March 30.  SGSC travels to Southern Crescent Tech and GHC travels to EGC.  A win by Georgia Highlands will allow them to remain in first place and win the regular season GCAA regular season title.  A loss will allow South Georgia State to tie them as co-conference champions and force a tie-break for the right to host the Region 17 tournament finals and semi-finals.  South Georgia State and Georgia Highlands split in their regular season match-ups.

The SGTC Lady Jets will travel to Rome on Friday, April 2 for a semi-final Region 17 tournament match-up against the winner of the East Georgia State/Andrew College match-up on Tuesday, March 30 in Swainsboro.  Georgia Highlands will take on the winner of the Albany Tech – Central Georgia Tech game at 6 p.m. on Friday, April 2.  The winners of those games will meet at 2 p.m. on April 3 in the finals in Rome.