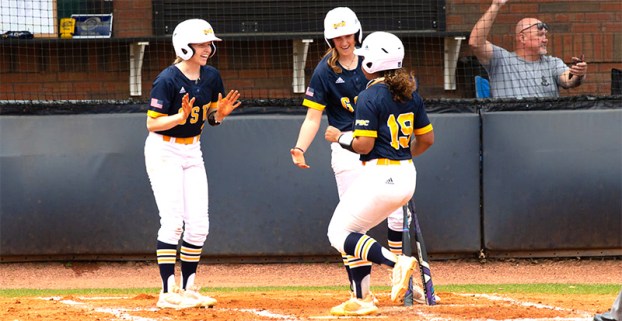 GSW freshman pitcher Zoe Willis (19) belted a two-run home run in the bottom of the fifth and struck out six University of Montevallo Falcons to lead the Lady Hurricanes to a 12-9 victory over UM. Photo by Christopher Finn

GSW softball puts on hitting frenzy in win over Montevallo

Five different Lady Hurricanes had two hits, while Zoe Willis struck out six Falcons. Game 2 was canceled because of heavy rain and lightening in the area.

GSW got on the board in the first inning to take the lead. After back-to-back errors by UM, Katelyn Wood singled up the middle, driving in Kayla Kerr to make the score 1-0. In the bottom of the second with two outs, Jacie Johns doubled into right field that plated two Lady Hurricanes. Kerr followed up with a single right up the middle, scoring Johns and giving GSW (9-5) a 4-0 lead. In the top third, UM was able to tie the score at 4-4 on a two-run home run. Fortunately for the Lady Hurricanes, Lauren Kuerzi and Hailey Pinette each hit a solo home run in the bottom third to regain a 6-4 lead for GSW.

While UM (10-14) changed pitchers again, GSW started scoring again. In the bottom of the fifth, Ansley Duffey drove in Haley Griffin, who pinch ran for Kuerzi, who reached base on a single. A Falcon error helped GSW add to the score, followed by a two RBI single by Kerr. Willis followed up with a two-run home run as GSW scored six runs in the bottom fifth to take a 12-5 lead. UM scored two runs in both the sixth and seventh innings, but it wasn’t enough as the Lady Hurricanes held on to win 12-9.

The Lady Hurricanes will stay home and host Georgia College for their first Peach Belt Conference game of the season on Tuesday, March 30 in a doubleheader. The first pitch of Game 1 is schedule for 4 p.m.