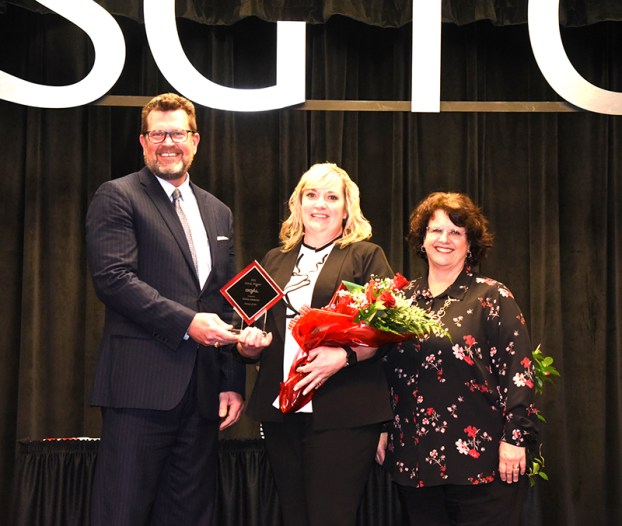 AMERICUS – What a difference a year can make!  Dawn Ammons, a cosmetology student from Ellaville, has been selected as the South Georgia Technical College Georgia Occupational Award of Leadership (GOAL) winner for 2021.  She will now represent the college in regional and state level competitions in an effort to be declared as the statewide Technical College System of Georgia Student of the Year and the face of technical education in Georgia.

“I am so honored and surprised,” said Ammons after South Georgia Technical College President Dr. John Watford called her name as the SGTC 2021 GOAL winner. “All of the students nominated by their instructors were awesome and the other three finalists were simply amazing.  I enjoyed getting to know them better and I was inspired by each of them.  I will do my best to make South Georgia Technical College proud.  Thank you so much for believing in me and selecting me for this honor.” 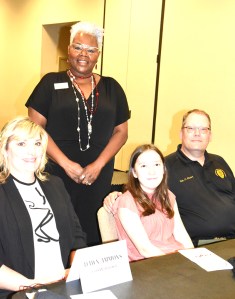 Ammons shared that a year ago she did not think any of this would be possible.  “I have always been a hard worker, but when COVID-19 hit, I lost a job I loved and no one was hiring. I found myself as an unemployed single parent and I really didn’t know what to do,” said Ammons.  “My daughter, Adison, was the one who suggested that I go back to school and here I am.”

SGTC cosmetology instructor and 2020 Instructor of the Year Dorothea McKenzie nominated Ammons for the honor.  “I am proud of all of the nominees.  They are all winners because they were nominated by their instructors as the best of the best in their programs,” said McKenzie.  “When we were asked to make nominations, I looked around my classroom and asked myself, who is the SGTC 2021 GOAL winner?  Dawn Ammons was my nominee and she is the 2021 SGTC GOAL winner.”

McKenzie described Ammons, who is in her second semester in the cosmetology program, as “a student that exemplifies excellence.  She is hardworking, respectful, and motivated.  She is a beautiful person who is always so helpful and nice.  She is a ray of sunshine and is the type of person who blesses your life when they cross your path. The other students in the program really look up to her.”

Ammons explained she never dreamed she would be back in school and recognized as the GOAL or Outstanding Student of the Year.  “My daughter really encouraged me to enroll in college.  I had worked at Glover Foods for 13 years before it was sold and closed locally.  I was able to find another job but after COVID-19, I became unemployed and no one was hiring.  My family had always depended on my income and now I couldn’t provide.  I really didn’t know what to do.

“My daughter suggested that I try cosmetology.  I did and Dorothea Lusane-McKenzie was so energetic and excited about her program that I knew this was the fit for me.  The hands-on training coupled with the affordable tuition made technical education the best choice for me.  And the free books at South Georgia Tech made it even better,” laughed Ammons.

“My dream is coming true because of South Georgia Technical College,” explained Ammons.  I am on the right path to a rewarding career.  I will be able to provide for my daughter now and I will do everything I can to make each of you proud of selecting me at the 2021 GOAL student.”

During the presentation, special remarks and presentations were made by GOAL sponsors on behalf of the Sumter County Chamber of Commerce, the Americus Rotary Club and by SGTC President Emeritus Sparky Reeves and his wife, Allene. Vanessa Wall, SGTC Assistant Vice President of Student Affairs, and the SGTC GOAL Coordinator, oversaw the program and the process.

Ammons will now proceed to the regional judging on April 27th in Tifton.  Nine regional finalists – three finalists from each of the three regions – will be announced during the Technical College System of Georgia’s State level competitions.  A panel of leaders from the business, industry, and government sectors will interview them and choose one to be the 2021 State GOAL Winner and the recipient of the GOAL medallion.  Additionally, the state winner becomes the spokesperson for technical education in Georgia for the entire year and is awarded a new car from Kia Motors.