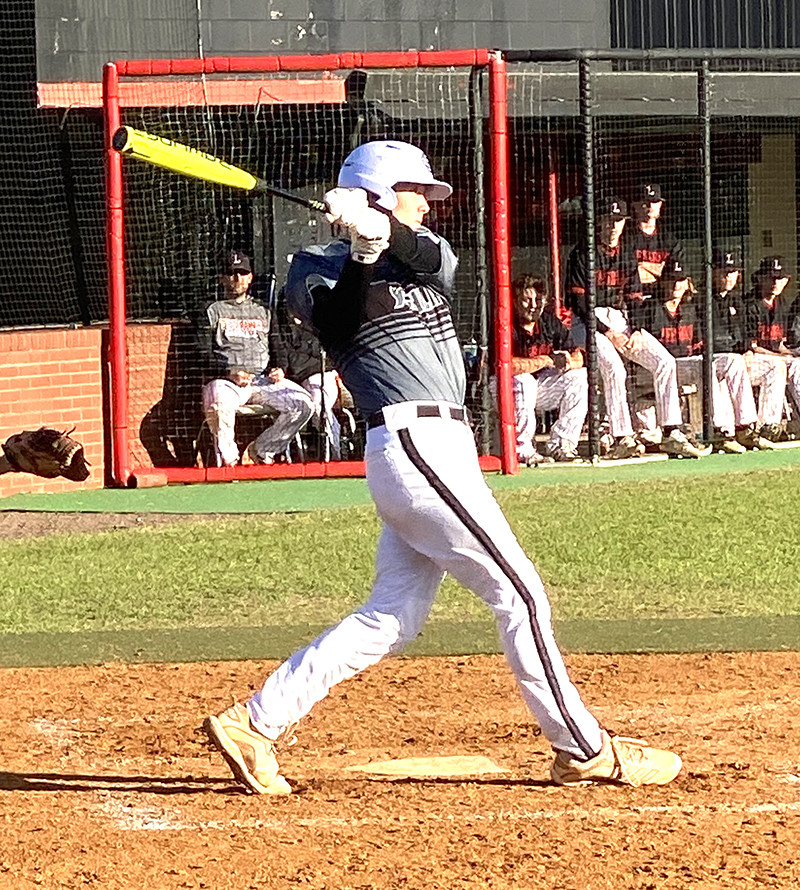 Schley County shortstop/pitcher Dylan Taylor is seen here hitting a grand slam home run against Lee County earlier this year. In the fifth inning of Wednesday’s game at Crisp County, Taylor belted a three-run home run to give the Wildcats a 10-2 lead. SCHS would go on to defeat the Cougars 16-4. ATR Archive

CORDELE – The Schley County High School Baseball Team (SCHS) is on a roll and that might be an understatement. Since Saturday, March 13, when the Wildcats lost 6-5 to Westfield, they have won 10 straight games and have outscored their opponents by a total of 101-19. Their latest victim was Crisp County (CC), whom they clobbered 16-4 in Cordele on Wednesday, April 14.

The Wildcats (18-5) pounded out nine hits in this game, but they also took advantage of eight walks issued by CC pitchers.

Luke Renfroe led the SCHS offense by going 3 for 4 at the plate with three singles and three RBIs. Trypp Lumpkin also had a strong day at the plate, as he went 2 for 4 with two RBIs.

The Wildcats jumped out to a 2-0 lead early in the first inning, but they did it with just one hit: an RBI double by Owen Lamb. After Tucker Welch drew a one-out walk, Jack Clark drove in Lamb on a sacrifice fly to give SCHS the early 2-0 lead.

The Wildcats scored a run in the third and two more in the fourth to take a 5-0 lead before the Cougars finally got on the scoreboard with two runs of their own in the bottom of the fourth.

However, that would be as close as the Cougars would get. In the top of the fifth, the Wildcats exploded for five runs, with three of those runs coming on a three-run home run by Dylan Taylor. The Cougars responded in their half of the fifth by scoring two runs on three hits and taking advantage of an SCHS error, making the score 10-4 in favor of the Wildcats.

However, in the sixth inning, SCHS completely erased all doubt as to which team would win. The Wildcats put the game away by scoring six runs on just two hits and took advantage of two walks, three hit batsmen and a passed ball that allowed a run to score.

The Wildcats will now turn their attention to Chula, GA, where they will head to on Friday, April 16 to take on Tiftarea Academy. In the last meeting between the two clubs in Ellaville on Wednesday, March 10, the Panthers got the upper hand of this catfight by beating SCHS 6-4. First pitch for Friday’s game is scheduled for 5:30 p.m.