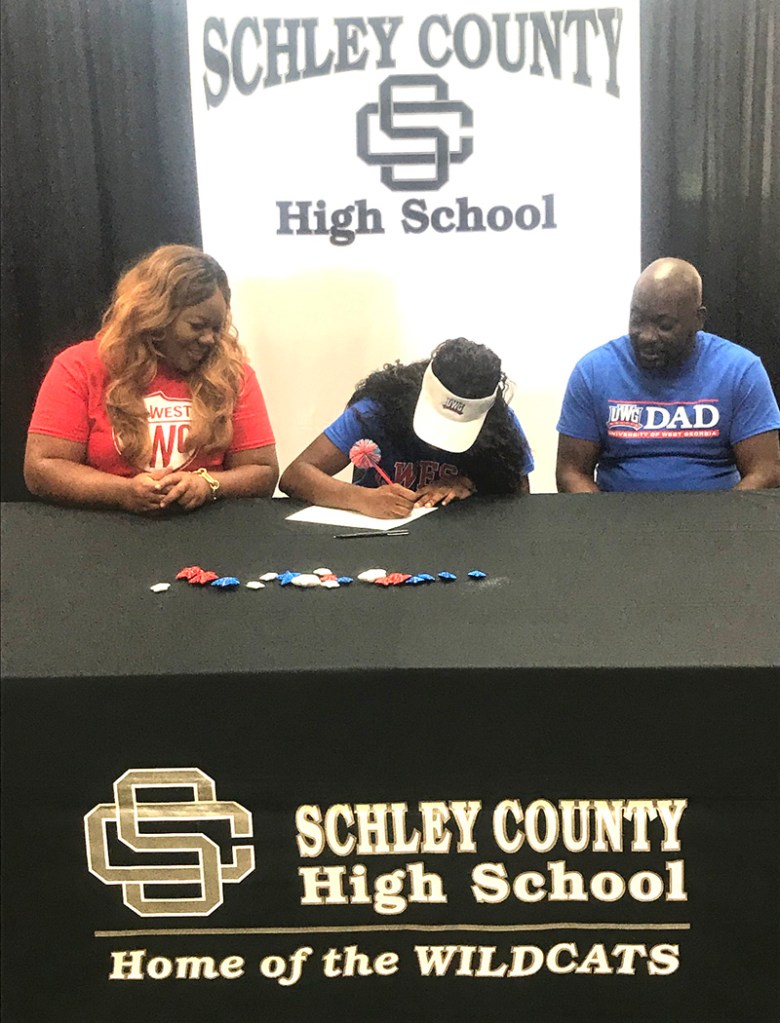 ELLAVILLE – On Friday, May 7, Schley County senior girls’ track and field star Dasani Minter made it official. In front of a large group that included family members, teammates, coaches and friends that were gathered in the media center at Schley County High School, Minter signed a letter of intent to continue her education and run track at the University of West Georgia (UWG).

Minter has had a stellar career while competing for the Lady Wildcats and it is still not over, as she will be competing in Sectionals on Saturday, May 8 and, most likely, will also be competing in the GHSA Class A-Public State Meet in Albany next weekend.

During her career at Schley County, Minter set school records in the 100 Meter Dash (12.62), the 200 Meter Dash (26.22), the Long Jump (16-11) and as a member of both the 4×100 and 4×400 Meter Relay teams. She has won a region title five times and has placed at the State Meet seven times. During her freshman year, Minter qualified for the State Meet and placed seventh in State in the 100 Meter Dash. That same year, Minter was also a member of the 4×100 and 4×400 Meter Relay teams that finished fifth and eighth in State respectively. 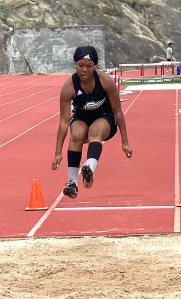 During her sophomore year, Minter qualified for State in all five of her events and placed sixth in the Long Jump. She also finished seventh in State in the 400 Meter Dash, eighth in the 200 Meter Dash and was a member of the 4×100 Meter Relay team that finished fourth in State.

Unfortunately for Minter, she did not get to compete during her junior year because of the COVID-19 Pandemic, but has rebounded like the champion that she is in this her final year as a Lady Wildcat. So far this year, Minter has qualified for Sectionals in all four of her events. This year, the GHSA changed the maximum number of events a student-athlete can compete in from five to four.

In addition to West Georgia, Minter was recruited by other colleges, such as Valdosta State, Georgia State, Truett-McConnell, Rheinhardt University and Troy University just to name a few. Minter visited all of those schools, but in the end, being that she plans to be a nurse one day, it was UWG’s nursing program that impressed her enough to continue her education and compete in track and field in Carrollton. “They (UWG) have a nice nursing program that I really like. They have a nice campus that I really like,” Minter said. 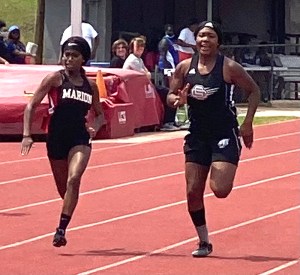 As a student-athlete, Minter simply wants to continue to get better and to continue hewning her craft, but she told the Americus Times-Recorder that she specifically would like to make All-Conference while competing at UWG.

Minter has made a lot of great memories while at Schley County, but for her, the most memorable event that took place happened during her sophomore year, when she qualified for State in all five of her events.

Courtney Coogle is in her first year as the SCHS girls’ head track and field coach. Coogle has only known Minter for one year in an outside the classroom, but during this year, she has noticed Minter’s desire to always improve and get better and to never be satisfied with where she is, whether it’s in academics or athletics. “I think she’s a great kid. Academically, she wants to be pushed to the next limit,” Coogle said. “I got to coach her in basketball as well. She always wanted to be pushed to the next level and she wasn’t willing to give up.”

Scott Burgess, who now serves as the SCHS boys’ track and field coach, has worked with Minter over the last four years and has seen how her hard work has rubbed off on to the other athletes, thus improving the overall success of the program.

“She’s been a tremendous help. Anytime one of your best athletes is one of your hardest workers, that means a lot to the program because the younger kids see how hard she’s working and that makes them want to work harder in their events as well,” Burgess said.