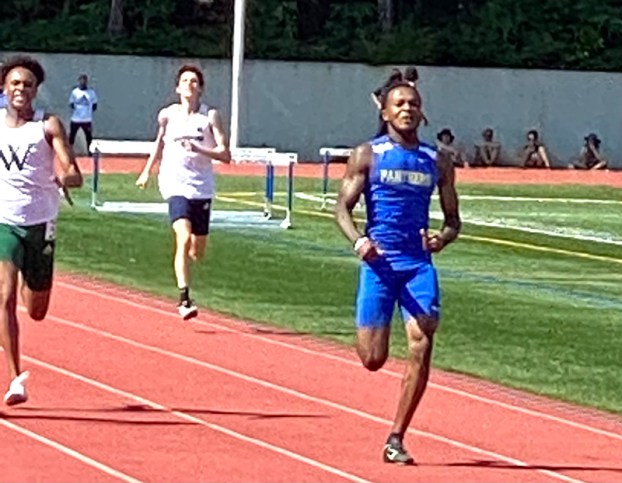 Americus-Sumter senior sprinter Braylon Green (blue uniform) wins the Boys 400 Meter Dash in the GHSA Sectional B Meet in Atlanta. By virtue of his performance, Green automatically qualifies for the state meet. Photo by Ken Gustafson

ATLANTA – Americus-Sumter senior sprinter Braylon Green won the Boys 400 Meter Dash event and his teammate, senior sprinter Christian Waymon, finished fifth in the finals of the Boys 100 Meter Dash at the GHSA Class AAA Sectional B Meet held at Lakewood Stadium in Atlanta on Saturday, May 8.

As a result of their success, both Green and Waymon have qualified for the GHSA Class AAA State Meet in their respective events. The top eight contestants in each event at the sectional meet automatically qualify for the state meet. The GHSA Class AAA State Meet will be held at Hugh Mills Stadium in Albany this Thursday through Saturday, May 13-15. 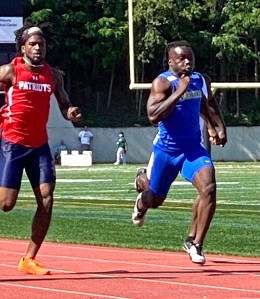 Americus-Sumter senior sprinter Christian Waymon finished in fifth place in the Boys 100 Meter Dash in a time of 11.12 at the Sectional B Meet in Atlanta. Waymon’s performance was good enough for him to qualify for the state meet in Albany.
Photo by Ken Gustafson

Green won the 400 Meter Dash with a time of 49.99, edging out event runner-up Ryan Githuku of Westminster (50.54). In the Boys 100 Meter Dash, Waymon was able to nail down a berth in the state meet by finishing fifth in the event in a time of 11.12, which was slightly behind fourth place finisher William Stewart of Mary Persons (11.07) and barely ahead of sixth place finisher Kylan Wimbish of Sandy Creek (11.13).

In the Girls High Jump event, Americus-Sumter senior Selliyah Owens, who recently signed a track scholarship to Columbus State, was hoping to finish in the top eight in the event and earn a berth in the state meet, but unfortunately, her goal of reaching State fell short as she was able to clear the bar at 4-10 (four feet, 10 inches), but no higher. As a result, Owens finished in 11th place in the event. 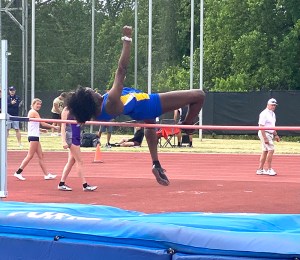 Americus-Sumter senior Selliyah Owens clears the bar at 4-10.00 in the Girls High Jump event at the Sectional B Meet. Owens finished in 11th place in the event.
Photo by Ken Gustafson

Though she was disappointed in not qualifying for the state meet, Owens was still happy with the effort that she gave. “Today was very good. I feel like I did good,” said Owens. “Though I wanted to go to state, I didn’t go. Overall, I had a good season.”

Owens’ teammate, freshman Jakierra Pride, was also trying to make it to Albany in the Girls Long Jump. However, Pride finished out of the running in 15th place with a distance jump of 13-05.00. “I think I could have made my stride longer so that I would hit the board,” said Pride. Pride jumped far below her PR (personal best) for this year, which was around 15-09.00 (15 feet, nine inches).

The GHSA State Meet for Classes A-Public, 3A and 4A gets underway at Hugh Mills Stadium in Albany on Thursday, May 13 at 9 a.m.

AMERICUS – She has put in the work for the last four years as a Lady Panther, and now that... read more