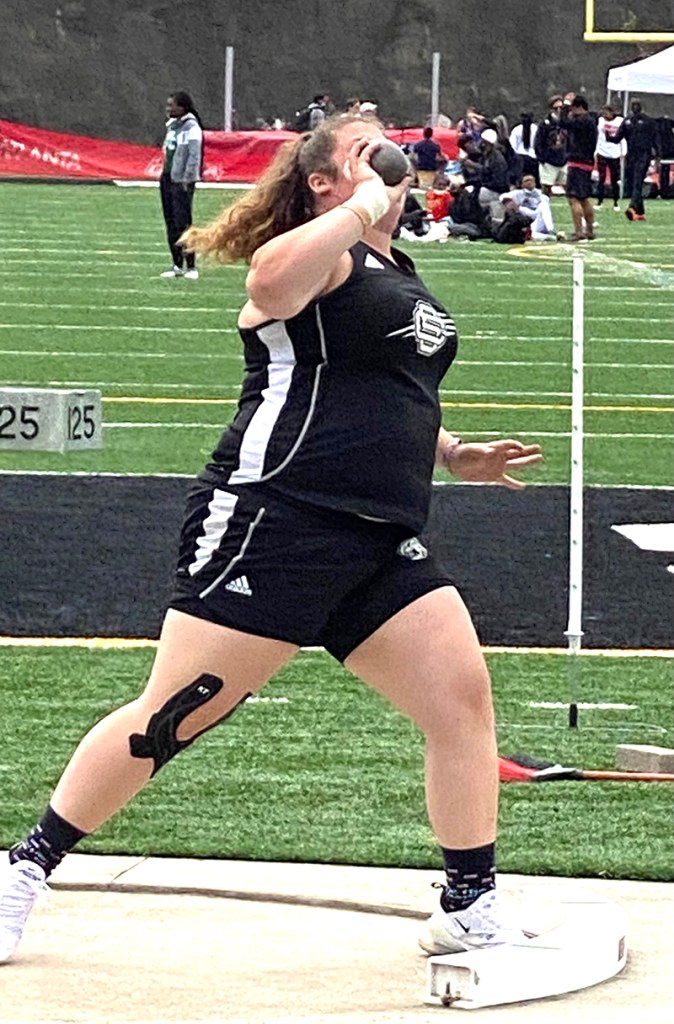 In reaching 34-4 on her final throw of the competition, Justice broke her own school record of 33-10 that was set earlier this year at the Westover Relays. After making throws of 30-11 and 32-9 earlier in the competition, Justice’s record-setting performance on her final throw was less about technique and form and more about desire. “I think that my mentality, when I get up there to throw is ‘This is your last chance. Give it everything you’ve got. You have nothing to lose,” Justice said.

Not being able to compete a year ago due to the COVID-19 Pandemic was difficult for Justice, as it was for her teammates and every other high school student-athlete in the country. “It has been rough. I didn’t have a whole last year. I had one meet. That’s all I got,” Justice said. “It’s been a lot of work practicing every day, trying my best, giving it everything I’ve got because I know that I found something that I can succeed and I’m good at.” 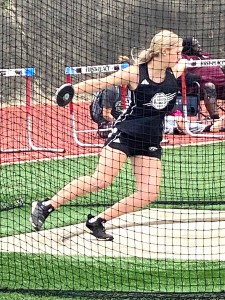 Schley County senior Rene Rix finished fourth in the State in the Girls Discus competition by making a distance throw of 100-1.
Photo by Ken Gustafson

For Rix and the other girls competing, the unusually cold weather on Thursday morning made things more difficult, but she was able to push through.

“A lot of the girls messed up and scratched. It was really hard because they wind was blowing too,” Rix said. “Other than that, we all tried and did our best.” 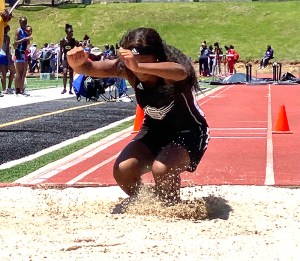 When she started competing for the Lady Wildcats in the Discus competition, she knew she had the skills to succeed, and with hard work, she was able to make it to the state meet for the first time and be amongst the best in the state in the Class A-Public Division. “When I first started throwing discus, I was already good at it,” Rix said. “I started doing it rapidly. I was throwing good and then COVID hit my junior year, so I didn’t get to throw and then for senior year, I had to start back over. I had to do it again and I grew rapidly again and I finally got to my goal, which was to come to State and throw over 100 and I did that.” 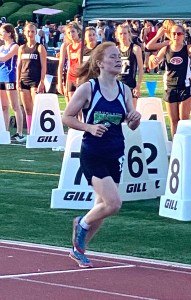 Furlow Charter senior Maya Wynn finished fifth in State in the Girls 1600 Meter Run with a time of 5:45.62. Wynn’s time is both a new school record and a new PR for herself in the event.
Photo by Ken Gustafson

Another Lady Wildcat, senior Dasani Minter, set another school record and it came in the Girls Triple Jump event. Minter broke her own school record that she had set earlier this year by jumping a distance of 35-5 (35 feet, five inches) on her final jump of the competition to finish fifth in the state. “I was just focusing. I’ve been working hard at practice all during last week,” Minter said. “I just meditated and I was just working my butt off at practice to get better at State.” On her first couple of jumps, Minter reached a distance of about 33 feet, but was able to make a key adjustment on her final jump that made the difference. “I had to come up a few steps to get my steps right and I had to adjust in my jump,” Minter said. “I had to get higher in the air and get my leg and knee up in the air to my chest.” Minter also finished in the top 10 in State in the Girls Long Jump, finishing 10th with a distance jump of 14-11. 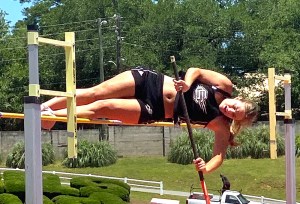 In the Girls Pole Vault competition, SCHS senior Perri DeVane, who won the region championship, finished in third place in State by clearing the bar at a height of 8-6. That height was slightly shy of her PR (personal best) of 8-8, which she set during the region meet. For a lot of high school student-athletes, not competing a year ago due to COVID was a tremendous setback and for DeVane, that was no exception.

“If I had that last year (2020), I think it would have been a totally different story this year,” DeVane said. “I’m just thankful that I got to do it this year.” 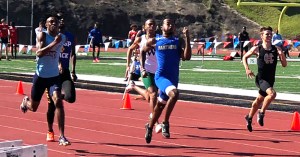 Americus-Sumter sprinter Braylon Green finished second in his preliminary heat of the Boys 400 Meter Dash with a time of 50.15 at the GHSA Class AAA State Meet and has qualified for the finals of that event, which will be held on Saturday.
Photo by Keith Pinckard

On Day 1 of the state meet, there were athletes from other local schools who turned in strong performances. Furlow Charter’s Maya Wynn finished in fifth place in the Girls 1600 Meter Run, finishing in a time of 5:45.62. Wynn’s time was not only a PR for her, but a new school record as well.

In boys’ action, Furlow Charter also had another school record broken when Edwin Gonzalez ran a time of 11:11.02 and finished ninth in the Boys 3200 Meter Run. In that same event, SCHS senior Aaron Pinckard finished in fifth place with a PR of 10:53.30. “My strategy was just to go in and sit behind the guys that I knew were a little bit faster than me,” Pinckard said. “Then just stay right on then and try to push it through the last couple of laps and see what I could run. It went fairly well, I guess. I got fifth place.” 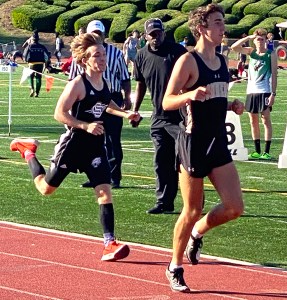 Pinckard’s teammate, Dustin Howard, finished the event in 10th place in a time of 11:21.38, which is a new PR for him. “It’s been a great season. The most I shredded off was about a minute in the two mile,” Howard said. “My last race was actually 12:05.” In the Boys 1600 Meter run, Pinckard finished in eighth place in a time of 4:58.73. His fellow Wildcat teammate, David Williams, finished two spots ahead of him in sixth place with a time of 4:57.74. 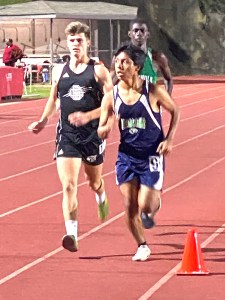 Furlow Charter’s Edwin Gonzalez (right) and Schley County’s Dustin Howard (left) fight it out in the Boys 3200 Meter Run. Gonzalez ended up finishing in ninth place with a new PR and a new school record of 11:11.02, While Howard finished right behind Gonzalez in 10th place with a time of 11:21.38.
Photo by Ken Gustafson

While Schley County and Furlow Charter athletes succeeded on Day 1, Americus-Sumter’s two sprinters, Braylon Green and Christian Waymon, made it into the finals of their respective events. Green finished in second place in his preliminary heat of the Class AAA Boys 400 Meter Dash with a time of 50.15. His ASHS teammate, Christian Waymon, booked his spot in the finals of the Class AAA Boys 100 Meter Dash by finishing in sixth place in the preliminary heat with a time of 11.00. 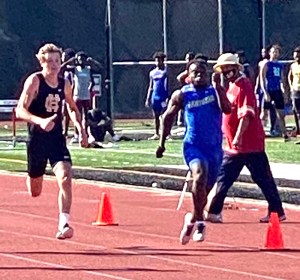 Americus-Sumter senior sprinter Christian Waymon finished in sixth place in his preliminary heat of the Boys 100 Meter Dash in a time of 11.00 and has qualified for the finals of the event on Saturday.
Photo by Ken Gustafson

Both Waymon and Green will be in the finals of their respective events on Saturday, May 15. The GHSA Class a-Public, 3A and 4A state meets are all being held at Hugh Mills Stadium in Albany, with more action coming on Friday and Saturday, May 14-15.