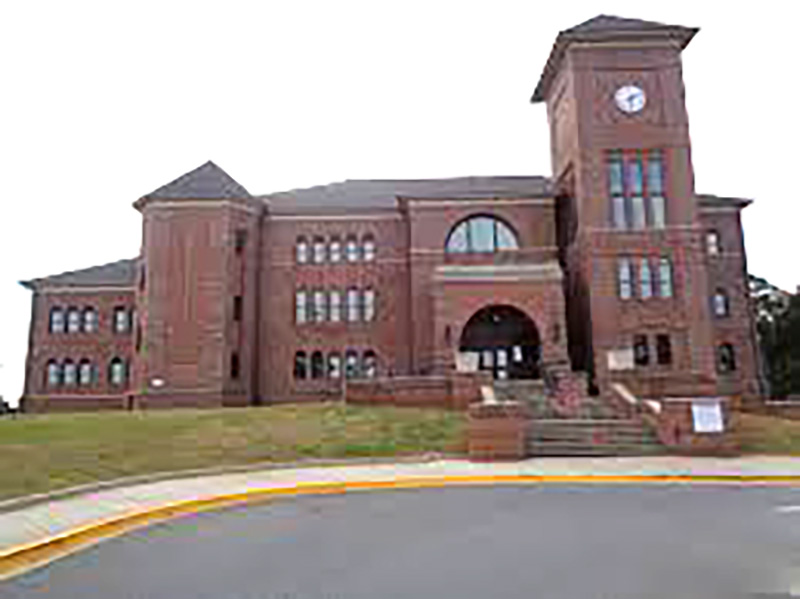 The Sumter County Board of Commissioners normally conducts its monthly work session and regular meeting at the Sumter County Courthouse. Though some of the commissioners were at the courthouse at the BOC's May regular meeting, some participated via Zoom. Due to the COVID-19 Pandemic, the general public is still not allowed to come to the courthouse to attend the meetings, but can follow them on Zoom. ATR Archive

AMERICUS – The Sumter County Board of Commissioners (BOC) met on Tuesday, May 18 for its monthly regular meeting at the Sumter County Courthouse. Due to the on-going COVID-19 Pandemic, the meeting was not opened to the public, as far as being there in person, but all of the commissioners were present at the courthouse except for Board Chairman Mark Waddell, who participated in the meeting via Zoom. County Operations Administrator Rayetta Volley also participated in the meeting via Zoom.

At the beginning of the regular meeting, a public hearing was called to discuss a request from Jeffrey Dale Thorne to obtain a license to sell alcoholic beverages at his establishment; Volume Powersports, LLC, which is located at 4246 US Highway 280 East in Cobb, GA. Commissioner Scott Roberson presided over the meeting and asked if anyone online wanted to speak for or against Mr. Thorne being granted the license. Mr. Thorne, who was also participating via Zoom, spoke up in favor of it and no one else spoke up for or against it. Commissioner Roberson brought the public hearing to a close and asked for a vote. Commissioner Jesse Smith made a motion for approval and Commissioner William Reid seconded the motion. The BOC voted and the approval to grant Mr. Thorne the license passed unanimously.

The BOC approved a resolution of an amendment adding select conditions assessments and work program activities to the Americus and Sumter County Comprehensive Plan. Commissioner Reid made a motion for approval and Commissioner Waddell seconded the motion. The BOC voted and the approval of the amendment passed unanimously.

The BOC also discussed the Sumter County 2018 Community Development Block Grant (CDBG) and the request to expand the target area to include two additional homes. According to the Department of Housing and Urban Development’s website; www.hudexchange.info, the CDBG Program provides annual grants on a formula basis to states, cities, and counties to develop viable urban communities by providing decent housing and a suitable living environment and by expanding economic opportunities, principally for low and moderate-income persons.

Board Chairman Waddell stated that eight of the homes in the county’s CDBG program have been completed, but that two or three of those homes are in the process of demolition taking place. Commissioner Clay Jones asked Waddell if this subject can be tabled until next month’s work session. Waddell replied that in his honest opinion, this issue needed to be dealt with as soon as possible and then asked Jones what more information is he looking for. Jones replied that the county is spending $87,000 on a certain project and asked Waddell whey he would spend $87,000.00 on a rehab. “You built a new house on the other street for $103,000.00. Why would you put that kind of money on a rehab,” Jones said. Waddell replied that it would be up to the property owner if they didn’t want to do a demolition and rebuild the house. “If you rebuild it, it would be more than the $87,000.00. Sometimes it costs that amount of money, but primarily, it’s going to be up to the homeowner and what the homeowner would want to do,” Waddell said. Jones mentioned to Waddell that on one of the streets in the county that is considered to be part of the local CDBG program, the houses look devastated. Waddell replied that he has taken a ride onto that street and agrees that it is devastating, but added that if the people living in those houses refuse to do what they are supposed to do, such as pay the property taxes and get their deeds taken care of, then nothing will get done and all the money will go right back to where it came from and it will jeopardize the county in the future as far as getting more grants.

In the end, it was agreed that Waddell would send out an email detailing the situation on Wednesday, May 19 at 3 p.m. to all the commissioners so that they would have plenty of time to review the information and approve or deny this request. The BOC will also put on its agenda for the June Work Session to ratify for the record on the minutes what the board’s decision is regarding this matter.

The BOC also approved a transfer of a 2004 Ford Expedition from the Sumter County Sheriff’s Office to the Coroner’s Office. Commissioner Jesse Smith made a motion for approval and Commissioner William Reid seconded the motion. The BOC voted and the approval passed unanimously.

The BOC also discussed an agreement between Pictometry International Corp and the Sumter County Board of Tax Assessors. County Attorney Kimberly Reid told the BOC that she is seeing more and more contracts with vendors like Pictometry where they want the county to agree that if the county ever sues them under any breech at all in relation to the contract, that the amount the county will pay to recover will be limited to the amount the county will pay for the fees. “In other words, if you have to sue for anything, the most you can get is a reimbursement,” Reid said. She went on to suggest to the BOC that it go back and have that taken out of the agreement. In the end, it was agreed that this issue would be tabled until the June Work Session.

The BOC also approved the advertisement of a Request For Proposal (RFP) for Solid Waste Collection Services. Commissioner Smith made a motion for approval and Commissioner Reid seconded the motion. The BOC voted and the approval passed unanimously.

Another agreement was unanimously agreed to by the BOC. It voted unanimously to approve an Intergovernmental Agreement (IGA) with the Sumter County Board of Education (SCBOE) for mutual use of facilities. Attorney Reid stated that this IGA is between Furlow Charter School and the SCBOE. Commissioner Roberson asked for a motion of approval to amend the IGA between the SCBOE and Furlow Charter School for mutual use of facilities. Commissioner Smith made a motion for approval and Commissioner Reid seconded the motion. A vote was taken and the approval to amend the IGA passed unanimously.

The BOC also approved several Board Appointments. Former Commissioner George Torbert is currently serving on the Schley-Sumter-Macon-Webster Joint Development Authority and his term expires on November 14, 2021. Commissioner Roberson stated that the BOC had received one application from Jalana Houston to serve on that board once Torbert’s term expires. Waddell added that the BOC should approve Mrs. Houston’s appointment to that board and it did just that. Commissioner Smith made a motion for approval and Commissioner Reid seconded the motion. The BOC voted unanimously to appoint Mrs. Houston to the Schley-Sumter-Macon-Webster Joint Development Authority and will replace Mr. Torbert on November 14, 2021. Rayetta Volley added that Mrs. Houston will fulfill Mr. Torbert’s unexpired term until November 14.

The BOC also approved the reappointment of Wayne Goss to the Sumter County Board of Family and Children Services (SCBFCS). Mr. Goss’s current term expires on June 30, 2021. Volley told the BOC that there are a total of three people, including Mr. Goss, who are interested in serving on this board and that it would be up to the BOC if it wanted to conduct interviews of these candidates. Volley added that Mr. Goss, who wants to be reappointed, would be representing the faith-based community. Volley also stated that Dr. Sabrina Hopkins-Pitts, who currently serves on the Sumter County Library Board, would also like to serve on the SCBFCS and would be representing the mental healthcare providers. “We have another application from Miss Jeraldine Holley, and the category she would be representing would be education,” Volley told the BOC. It was agreed to by the commissioners that the three candidates would be interviewed and that the BOC would make a final vote to elect a candidate at its June Work Session.

Both Keith Lee and William Bird currently serve on the Sumter County Library Board of Trustees (SCLBT), but their terms expire on June 30, 2021. Volley told the BOC that she received no applications from any candidates before the May 14 deadline and asked the commissioners if they would re-advertise the positions on this board for another 30 days. “The two people on there (Lee and Bird) can’t be reappointed,” Volley told the BOC. It was agreed to by the commissioners to re-advertise the positions on the SCLBT for another 30 days.