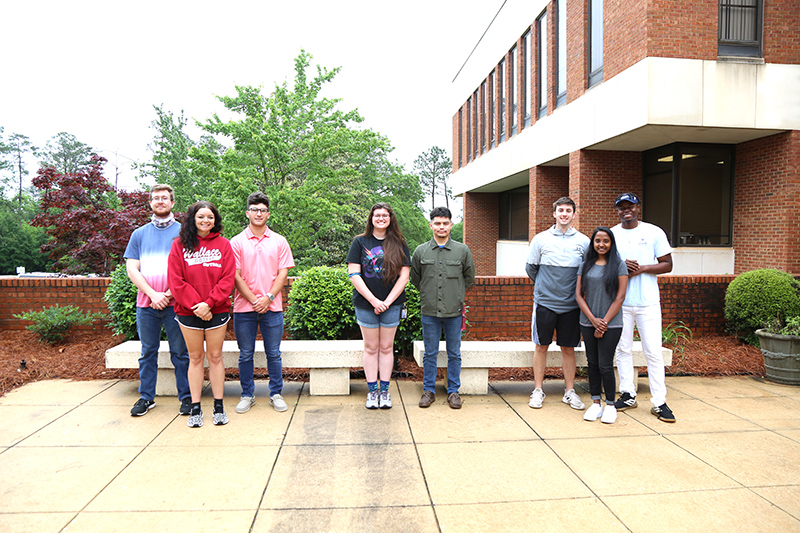 By Chelsea Collins, GSW Director of Marketing and Communications

AMERICUS – Three teams of senior business students at Georgia Southwestern State University (GSW) received high accolades this spring semester for their top performance in the Business Strategy Game out of more than 3,500 teams from 400+ colleges and universities around the world.

The Business Strategy Game is an online exercise where class members are divided into teams of three or four and assigned the task of running an athletic footwear company for a total of 12 “simulated” years in head-to-head competition against companies managed by other class members and thousands of teams across the world.

The comprehensive computer simulation is part of a final senior capstone Strategic Management course led by Robert Bennett, Ph.D., professor of management in the College of Business and Computing. The exercise brings together all areas of business, requiring students to position their firms competitively to achieve overall strategic and financial success.

Bennett noted that he has had teams over the years perform very well in the world rankings, including a couple of teams finishing first place, most recently in 2019. However, this is the first semester there were three GSW teams in the same course that received top rankings.

“It was a wild semester of extremely well-planned competitive action and reaction by these three teams,” stated Bennett. “It was special to have three equally matched and highly competitive teams this semester.”

The athletic footwear company “Dexterity Shoes” was the highest performing team in Bennett’s Management course this spring. The company, managed by seniors Korben Ethridge of Americus, Devin Shea of Valdosta, and Bayley Birdsong of Baconton, ranked fourth in the entire world in stock price, 11th in earnings per share (EPS), 43rd in return on equity (ROE), and finished 80th worldwide in overall team score.

“This team performed incredibly well throughout the simulation,” stated Bennett, “and would have posted even more impressive numbers if not for the intense competitive pressure placed upon them by the other strong teams in their same course.”

“Excalibur Shoes” ran neck and neck with the leaders all semester and actually outperformed Dexterity in ROE. The team, led by Dorothy Bryans of Covington, Carlos Hernandez of Americus, and Tylen Pepito also from Americus, captured 20th worldwide in ROE, 22nd in EPS, and 32nd overall in stock price.

“This impressive team would have likely been crowned champs in most semesters but ran up against two equally impressive teams this term,” reported Dr. Bennett.

The final entry among the high-performing trio was “Canes Shoes,” led by Joshua Cleveland of Dawson, Hayden Martin of Woodstock, and Jennifer Bandela of Medchal, India, now living in Americus. Bennett reported that this team didn’t perform as well throughout the semester but finished in top form, ending up 20th in ROE worldwide, 22nd in EPS, and 32nd in stock price.

“This team came on incredibly strong late in the game,” said Bennett “and mounted a legitimate challenge to be crowned tops in the class. It was really a lot of fun to watch these guys going at it each week.”