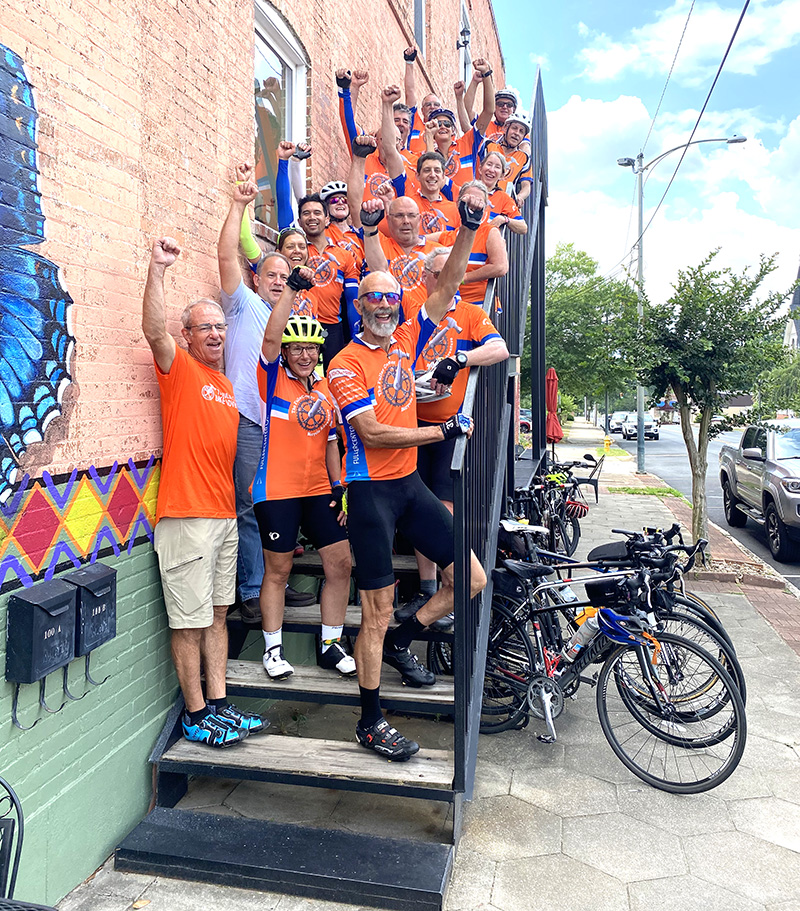 Several volunteer cyclists representing the Fuller Center for Housing pose for a picture on the stairwell outside Café Campesino on Friday, June 4. These riders stopped in Americus along their cross-country bike ride from Amelia Island, FL to Florence, OR. Photo by Ken Gustafson

AMERICUS – Friday morning, June 4, about 20 volunteer cyclists representing the Fuller Center for Housing arrived at 11:30 a.m. at Café Campesino, located at the corner of W. Lamar and South Jackson Streets, for a presentation by the owner of the establishment, Tripp Pomeroy. This group of cyclists is participating in the Fuller Center Bicycle Adventure: a 3,750-mile bike ride from Amelia Island, FL to Florence, OR.

The purpose of the cross-country bike ride is to raise money and awareness for the Fuller Center for Housing, whose international headquarters is here in Americus. According to the organization’s website, www.fullercenter.com, the Fuller Center for Housing is a faith-based and Christ-centered organization that promotes collaborative and innovative partnerships with individuals and organizations in an unrelenting quest to provide adequate shelter for all people in need worldwide.

According to Neil Mullikin, the Bicycle Adventure Coordinator, riders of various skill levels are participating in the ride. “Each of us from across the country will certainly come together. Some people are part of clubs. Some people are part of different groups,” Mullikin said. “We have one rider here who rode…I think the longest ride before was 30 miles before he started this adventure. All of us are at various skill levels.” 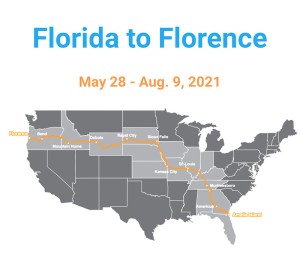 This is the bike route from Amelia Island, FL to Florence, OR that the riders participating in the Fuller Center Bicycle Adventure will be taking. The ride began on Friday, May 28 in Florida and is scheduled to end on Monday, August 9 in Florence, OR. The route can be found on this website: www.fullercenterbikeadventure.org.

After Pomeroy’s presentation, the riders rode with a police escort over to the Fuller Center and then continued on their trek to Oregon. Several churches along the route will be providing lodging and food for the riders until they reach Florence, OR on Monday, August 9.