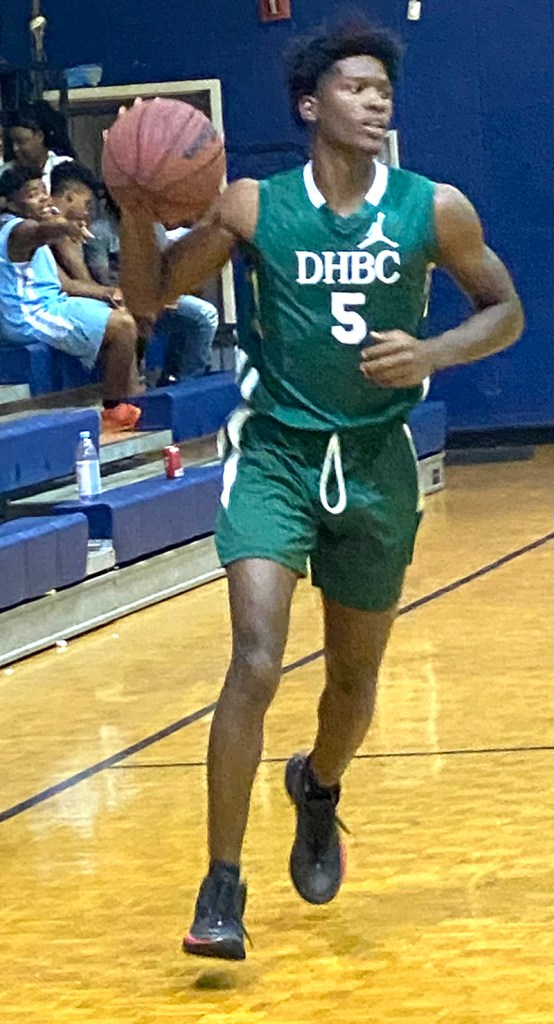 Former Americus-Sumter football and basketball star Que Willoughby scored 22 points to lead the 25U Baylor squad to a 60-59 victory over Gonzaga in DHBSL action on Friday, July 9 at Ninth Grade Academy. Photo by Ken Gustafson

AMERICUS – At the Americus-Sumter Ninth Grade Academy on Friday, July 9, basketball fans were treated to four exciting games that went down to the wire. The fourth and last game of the evening was won on a three-pointer at the horn by JaMarcus Scott to give the 25U Baylor club a 60-59 win over Gonzaga. This was all part of the exciting summer time action in the Dwight Harris Basketball Summer League (DHBSL).

The first game of the day featured two teams from the 11U Division: Gonzaga and UCLA. The game was a back-and-forth affair between both teams, but the UCLA squad came out on top 34-31. Demetrius Monts led UCLA in scoring with 13 points and Alex Brown led the Gonzaga club with 21 points. 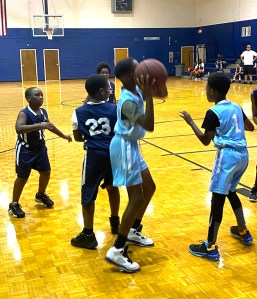 11U UCLA guard Demetrius Monts goes up to shoot. Monts scored 13 points to lead his team to a 34-31 victory over 11U Gonzaga.
Photo by Ken Gustafson

Game 2 of the day featured the Gonzaga and UCLA squads of the 14U Division and this contest went down to the wire as well. In the closing seconds, UCLA had a 42-39 lead, but Gonzaga was able to score four straight points to edge out the Bulldogs 43-42. Jaden Tatum led Gonzaga with 18 points and Kentravious Waters poured in 17 in the win. LeBron Brown led the UCLA 14U squad with 14 points.

In the 17U Boys Division, UCLA and Gonzaga were once again the featured teams, but while this game was close for most of the way, the UCLA squad was able to win 46-38. Dontavion Brantly and Carmelo Volley both led the Bruins with 10 points. 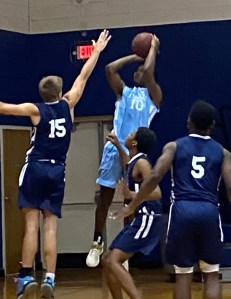 17U UCLA guard Travion Lamar goes up to shoot against 17U Gonzaga.
Photo by Ken Gustafson

The final game of the evening was like the most delightful desert after a delicious main course. This was the 25U Division game between Baylor and Gonzaga. This game featured several former local high school players who are now in college.

Max Foster, a member of the Baylor squad, was a recent standout at Southland Academy and will be playing college basketball at Bryan College in Dayton, TN. 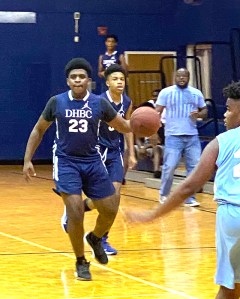 14U Gonzaga guard Jaden Tatum advances the ball up the court against UCLA. Tatum scored 18 points to lead the Bulldogs to victory.
Photo by Ken Gustafson

Brothers Kanova and Que Willoughby, who were both football and basketball stars at Americus-Sumter (now Sumter County HS), were also featured in this game. Both are currently members of the Valdosta State Football Team, but faced of against each other in this game.

As one might expect, this game was also a back-and-forth affair throughout. However, with the game tied at 57-57 and 3.8 seconds to play, the Gonzaga team inbounded the ball, but Melton McCoy was fouled with a little over two seconds left. This gave McCoy a chance to pretty much win the game for Gonzaga at the foul line by making two free throws, which he did. 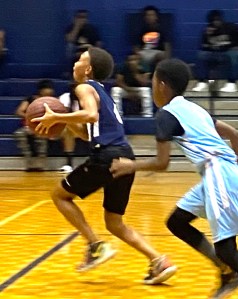 However, this set the stage for another fantastic finish. With two seconds left, Baylor’s JaMarcus Scott was able to receive a long inbounds pass. He took two dribbles and launched a three-point attempt at the buzzer that hit nothing but the bottom of the net, giving Baylor a thrilling 60-59 victory. Scott led Baylor with 22 points and Que Willoughby poured in 17 in the winning cause. Kanova Willoughby led Gonzaga with 20 points. 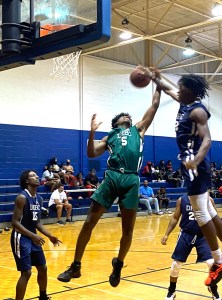 Kanova Willoughby (#5) fights for the rebound in 25U Baylor’s game against Gonzaga.
Photo by Ken Gustafson

There are two more weeks left in the regular season of the DHBSL, with games being played Monday through Saturday at the Ninth Grade Academy. Once the regular season concludes, there will be a postseason tournament with a champion in each division crowned in late July.