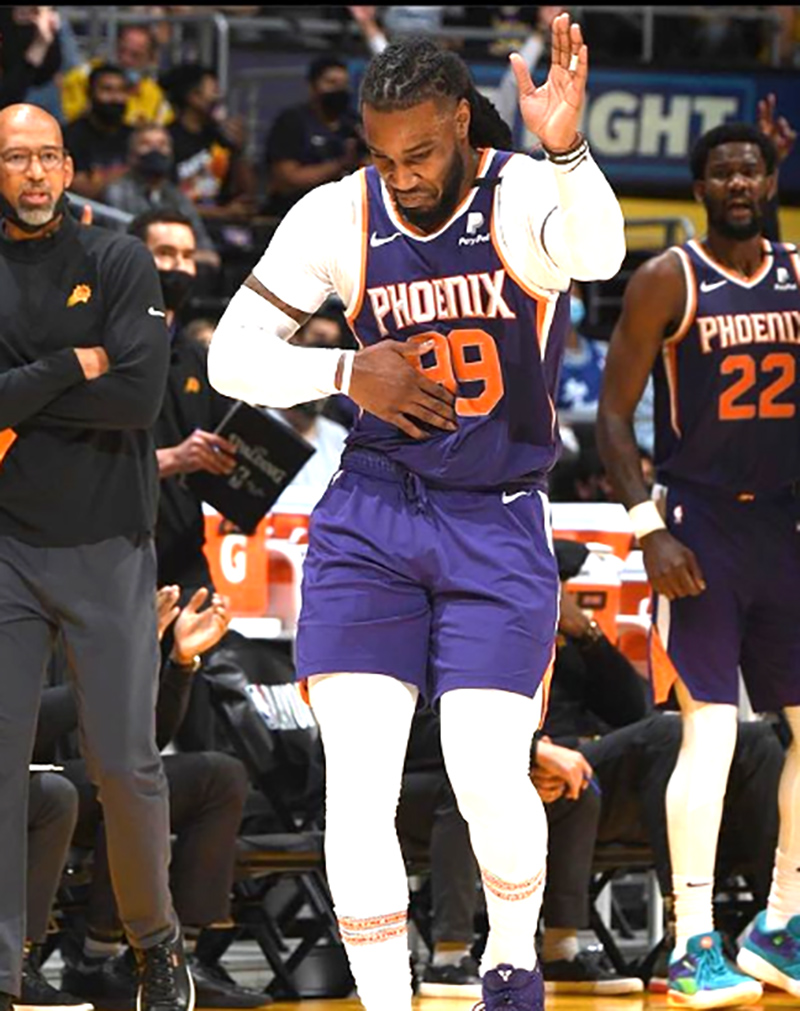 Jae Crowder (#99) imitates LeBron James after beating the Los Angeles Lakers in the first round of the NBA playoffs. Photo from Jae Crowder's Instagram Account

AMERICUS – Former South Georgia Technical College Jets basketball player Jae Crowder was featured in an article by Taylor Lee, Editor of Amherst Wire, July 20, 2021 outlining how Crowder is the penultimate role player searching for validation in the National Basketball Association league.  The article highlighting Crowder was released prior to his team, the Phoenix Suns, losing to the Milwaukee Bucks 105 – 98 in the NBA finals.  The article can be found at https://amherstwire.com/37041/opinion/jae-crowder-is-the-penultimate-role-player-searching-for-validation/

Jae Crowder and the Phoenix Suns went up 2 – 0 in the playoffs against the Milwaukee Bucks in the NBA playoffs before the Bucks came back and tied the series 2 – 2 and then went on to clinch the title 4 – 2 with the 105 – 98 victory Tuesday night.

Crowder began his college basketball career at South Georgia Technical College in Americus, GA.  In 2016, he spoke of his humble beginnings as a chunky high schooler with no major college offers to becoming an NBA star with a 5-year, $35 million contract.  In 2010, his local paper, the Times-Georgian in Carrollton, Georgia – 50 miles outside of Atlanta – wrote he was “an overweight good, but not great, high school player.” 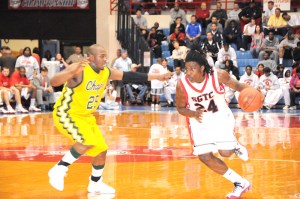 Jae Crowder (#24) as a freshman at South Georgia Technical College playing in the NJCAA National Tournament in Kansas.
Photo by Su Ann Bird

Times-Georgian sports editor Corey Cusick said Toyi Bailey, who played at Charleston Southern, not Crowder, was the best player on that Villa Rica High team.  As a senior, Crowder was the co-MVP from the newspaper’s 11 area schools.  Crowder’s biggest college offer was from nearby Division 2 West Georgia.  But that was for his football quarterbacking skills.

Jae Crowder, the son of Corey Crowder, who played 58 games in the NBA, chose to decline the football offer and attend South Georgia Technical College and play basketball for the Jets in 2008 – 2009.  He helped lead the Jets to a 28 – 8 overall record and their first NJCAA national appearance.  The Jets also won their first game in the national tournament with a 91 – 89 overtime victory over Navarro College.  Jae Crowder earned the GJCAA Player of the Year award as a freshman and was named to the GJCAA First team All-Conference squad.  He was also MVP on the Tournament and was on the All-Freshman team.  He transferred at the end of this freshman season.

Lee wrote once Crowder “got to college and eventually the NBA he was bouncing from school to school and team to team.  He played at South Georgia Technical College, then to Howard College and eventually landed in Marquette with the now all-star Jimmy Butler.  He had plenty of time to hone his grit, nastiness and toughness.  He used to go at it with Butler in practices and heave trash talk at one another like garbage men while playing each other in a series of one-on-one games.  He took his rugged mentality with him to the NBA.”