Schley County works out the kinks against Tiftarea 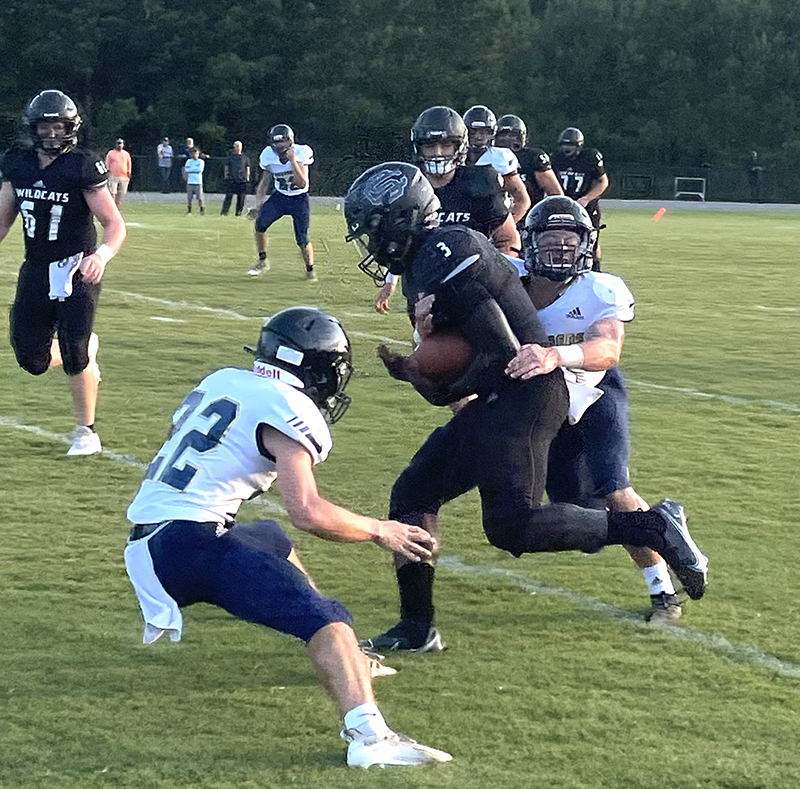 Schley County running back Zayden Walker scored two rushing touchdowns to help lead the Wildcats to a 35-14 victory over Tiftarea Academy in their first of two scrimmage games before the season starts on August 20 against Deerfield-Windsor. Photo by Ken Gustafson

ELLAVILLE – The Schley County High School Football Team hit the field at Wildcat Stadium Friday night, August 6 for a scrimmage game against Tiftarea Academy. The Wildcats used this scrimmage to perfect their skills and to work out the kinks in preparation for their season opener against Deerfield-Windsor on Friday, August 20.

Friday evening’s scrimmage was the first of two scrimmages for the Wildcats. The second one will be on Friday, August 13 at Irwin County.

The Wildcats got off to a dream start early in the game. On their first play from scrimmage from their own 22-yard line, quarterback Jay Kanazawa found JaLewis Solomon for a 78-yard touchdown pass. The extra point attempt by Javier Lopez was good and just like that, SCHS had an early 7-0 lead with 9:05 to go in the first quarter. 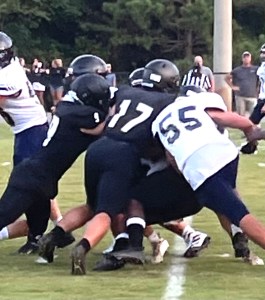 However, the Panthers were trying to work out their kinks too and they had an answer. With 3:46 left in the first quarter, Tiftarea quarterback Dylan Harbort threw a lateral pass to running back John Austin Lee, who ran the ball towards the SCHS sideline and got by a diving SCHS tackler. From there, Lee found nothing but green grass along the sidelines and scampered 89 yards for a touchdown. Harbort, who is also the Panthers’ kicker, kicked the extra point to tie the game at 7-7.

Later on in the first half, the Panthers were able to move the ball down into SCHS territory and Harbort would score on a quarterback keeper with 6:20 left before halftime. His extra point attempt was good and TA enjoyed a 14-7 lead. 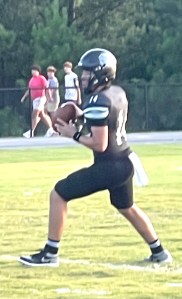 Fortunately for the Wildcats, they were able to get another big play from Solomon as he was able to break tackles and run 48 yards for an SCHS touchdown. The extra point by Lopez was good and the score was tied at halftime 14-14.

SCHS actually scored another touchdown earlier in the first quarter when Kanazawa threw a pass to Clinton Jackson in the end zone, but the play was nullified because of a holding penalty. 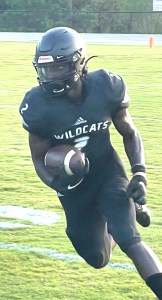 Schley County wide receiver JaLewis Solomon scored two touchdowns, including a 78-yard TD reception, to help lead the Wildcats to a 35-14 victory over Tiftarea Academy in the first of two preseason scrimmage games for SCHS.
Photo by Ken Gustafson

Early in the second half, the Wildcats were able to take the lead. They moved the ball down close to the TA 18-yard line. Then with 8:51 left in the third quarter, running back Malachi Banks was able to break through the Panther’s defense and ran the ball into the end zone for another SCHS touchdown. The extra point by Lopez was good and SCHS enjoyed a 21-14 lead.

With 2:11 to go, in the third quarter, the Wildcats had the ball at the TA 40. Then on second down, Zayden Walker broke several TA tackles and fought his way all the way down to the TA four-yard line. On the very next play, Walker bulled his way into the end zone for a Wildcat touchdown. The extra point by Lopez was and the Wildcats had a 28-14 lead with a little over two minutes left in the third quarter. 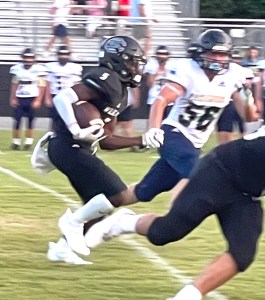 In the fourth quarter, the JV players from both teams came on to the field to finish the game, but the competition was no less intense. SCHS running back Matthew Nguyen ran the ball 18 yards on the first play from scrimmage to start the final quarter. Sam Forehand, who was brought in to play quarterback for the Wildcats, was able to run the ball for an eight-yard gain. A few plays later, Nguyen scored from two yards out. The extra point by Wyatt Vicencio was good and the Wildcats had a 35-14 lead.

The Panthers were able to move the ball down to the SCHS 25 on their next possession, but the Wildcat defense was able to stop the Panthers on fourth down. 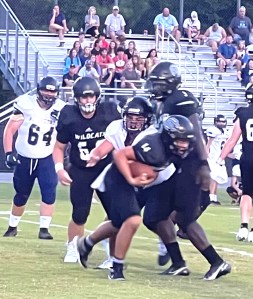 QB Jay Kanazawa carries the ball for the Wildcats.
Photo by Ken Gustafson

One of the big plays was a sack made by Sam Forehand. On the next SCHS possession with time running down, Forehand broke for a big play, running the ball into TA territory. After some more running plays, the scrimmage ended with the Wildcats emerging with a 35-14 victory. 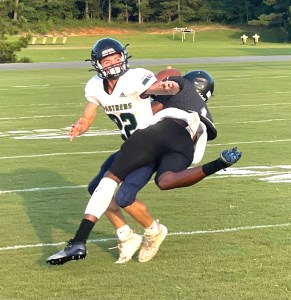