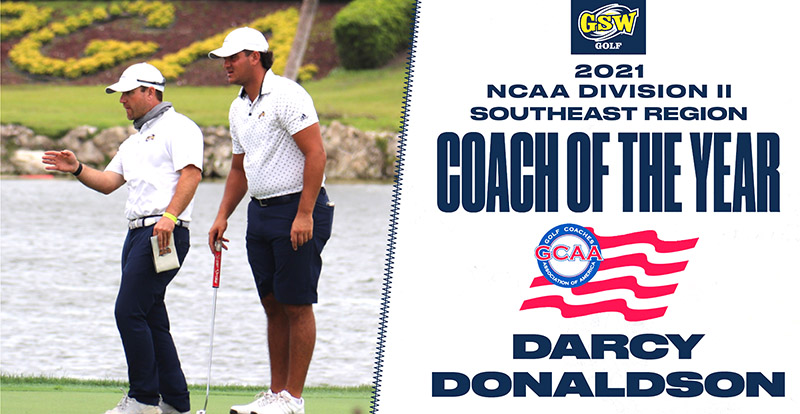 From the GSW Department of Intercollegiate Athletics

GSW made a historic postseason run at the 2021 NCAA Division II National Championship in Palm Beach Gardens, FL that led to a runner-up finish. The Hurricanes earned the fourth seed for medal match play and a spot in the national quarterfinals as a result of their finish in the stroke play portion of the event. GSW advanced to the semifinals with a 3-2 win over No. 5 seed Texas A&M University-Commerce and the finals with a 2-2-1-tiebreaker victory over top-seeded University of Indianapolis. The NCAA Division II National Championship was decided by the final pairing and the final three holes of the tournament as Arkansas Tech University defeated GSW, 3-2.

During the regular season, the Hurricanes won the Southeastern Collegiate on March 16, 2021 and finished in the top three in half of the six events played. GSW’s postseason run started with a third place finish at the South/Southeast Super Regional.

The Hurricanes had three players named to All-Peach Belt Conference teams in 2021 and two received All-Region distinction. Chase McLain, Saksit Jairak and Jack Tharrington earned All-America recognition from the GCAA. McLain closed the season at No. 19 in the NCAA Division II Golfstat computer rankings and Jairak finished No. 24.