Lady Wildcats fall to 0-3 with loss to Crawford County 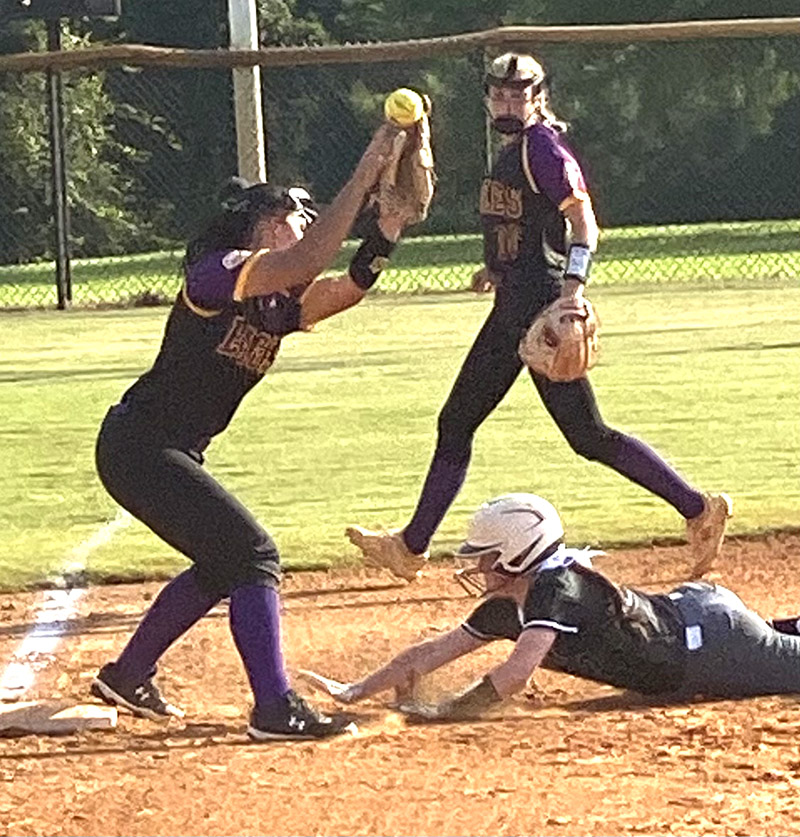 ELLAVILLE – After an exciting offensive display in their 13-11 loss to Perry the day before, the Schley County Softball Team (SCHS) didn’t have to wait long to try and earn its first win of the season when the Lady Wildcats hosted Crawford County (CC) on Thursday, August 12. However, unlike Wednesday’s game against Perry, in which SCHS scored 11 runs on 11 hits, the Lady Wildcats struggled on offense in the contest as they could only muster three runs on four hits. As a result, SCHS fell to 0-3 on the young season, losing to the Lady Eagles 5-3 at Wildcat Park.

Zoe Molina, Landry Whaley, Destiny LeCroy and Makena Wurtz were the only Lady Wildcats able to earn hits against the Lady Eagles. In contrast, CC scored five runs and belted out 13 hits, with four players having multi-hit performances.

The Lady Eagles got on the board first in the top of the first. Jaimee Hudson led off the game with a double and Bailey Carreker would later drive home Hudson on an RBI double to left field. 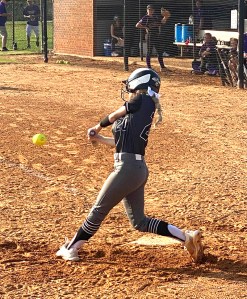 Schley County’s Makena Wurtz was one of four Lady Wildcats to get a hit against Crawford County in a 5-3 loss.
Photo by Ken Gustafson

SCHS responded by tying the game in the bottom of the second. With runners on first and second with one out, Emma Walker, the runner at second, stole third base. Then Brenna Jacobs grounded into a fielder’s choice that allowed Walker to score, tying the game at 1-1.

However, CC responded with two runs in the top of the third on three hits. The big hit in the inning came when Kryssi Maddox drove in Carreker on an RBI double. Mary Katherine Mason then followed that up with an RBI single to give the Lady Eagles a 3-1 lead.

The Lady Wildcats fought back in the bottom of the third by scoring a run on two hits and taking advantage of a walk and a hit batsman. With the bases loaded and two outs, Emma Walker was able to draw an RBI walk and SCHS only trailed 3-2. 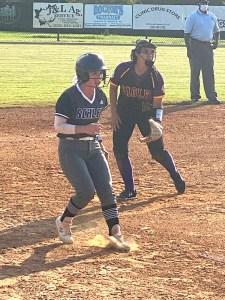 Schley County’s Landry Whaley gets her lead at third base against Crawford County.
Photo by Ken Gustafson

However, in the top of the fifth, CC responded again with two more runs on three hits, a walk and a hit batsman. The Lady Wildcats responded in the bottom half of the inning when LeCroy drove in Berkely Goodin on an RBI single, but that would be as close as SCHS would get.

SCHS will try once again to earn its first win of the season against Hawkinsville at Wildcat Park on Monday, August 16 at 5:30 p.m.